VIDEO Those daredevils on the flying cars. 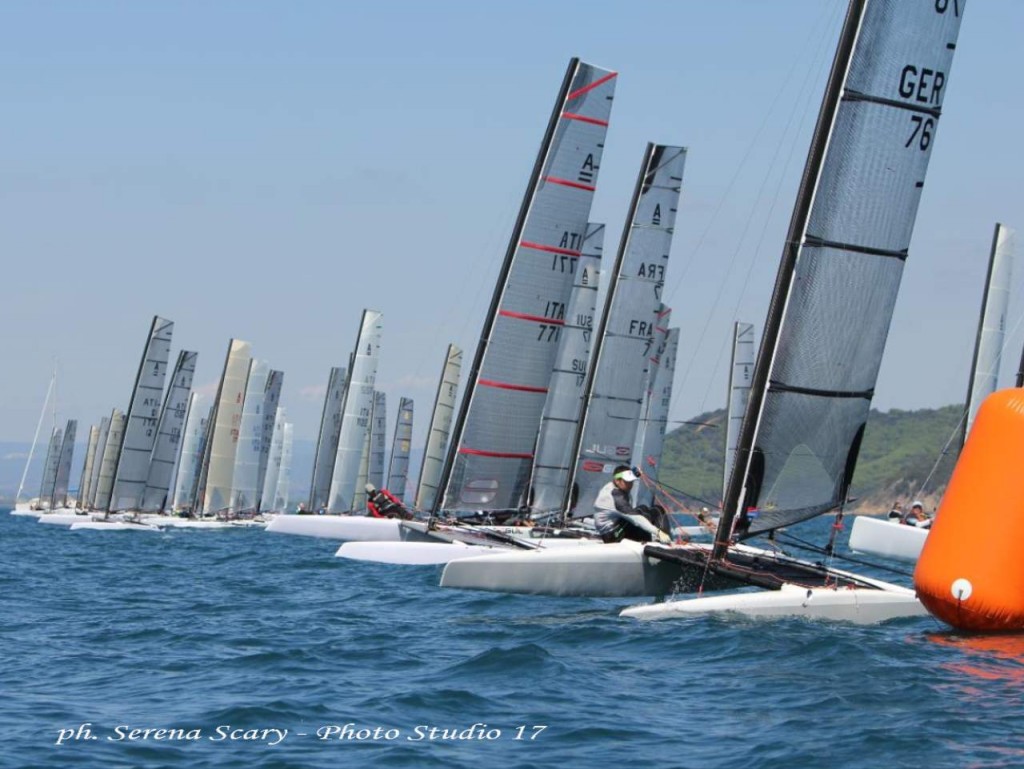 Punta Ala, late August 2014, Italian Class A Championship. In the beautiful gulf from Punta Ala to Piombino, in the face of the island of Elba, hosted by the beautiful Punta Ala Camping Resort, also this year the best Italian Class A helmsmen as well as numerous foreigners (German Swiss French Spanish Austrian and even a Swede) came to measure themselves and to try to understand something about these blessed foils and winglets that make the boat lift off the surface of the water in carrying gaits. Why so many foreigners in an Italian championship? Simple … because next year, the Class A World Championship will be held in this very stretch of sea.

VIDEO – THOSE DAREDEVILS ON THE FLYING MACHINES

NOT EASY TO FLY
We saw the phenomenon of flying boats last year in San Francisco during the America’s Cup. On television it seems easy and natural, flying on water. Well, it is not at all, and almost everyone here is grappling with a tough nut to crack. If there is a weak wind, under ten knots, the boat does not lift and, indeed, is somewhat slowed down by the modifications to the appendages. Above ten to twelve knots of real wind, the downwind hull also rises, but with the wind also comes waves that greatly disturb the gait. We are still in the early stages, there are fifty-six boats, and no two are alike. 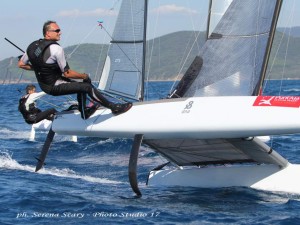 EACH IN HIS OWN WAY
C-shape drifts, J-shape drifts, sloping drifts, some traditionalists still with straight drifts. After the first three races, the first with weak wind, the second with somewhat stronger wind, and the third with a strong wind and formed wave, the race course rewarded the progressives/conservatives. Focused more on tactics and boat speed than on flying, German Bob Baier preceded Italian Luca Maffessoli, moreover tied on points..In third place was Swiss Sascha Wallmer and in fourth was Frenchman Jean Louis Le Coq. The clear feeling I have is that everyone thinks more about flying the boat than winning races.

WHAT IS A CLASS A?
But do you guys know what a Class A is? In simple and stringent terms, it is a small, technologically advanced, all-carbon monster, 5.50 meters long, 2.30 meters wide, with a mast about 9 meters high, with a sail area of 13.94 meters (including mast) and a minimum weight of 75 kilograms. Basically, the A-Class is a boat that in most cases weighs significantly less than its helmsman. More than Formula 1, I would say it is MotoGP. Under ideal conditions, these fighting dragonflies can develop speeds in excess of twenty knots and have sometimes recorded highs over 27. Serious stuff. The helmsman is always outside, hanging from the trapeze, both upwind and downwind. Nevertheless, the heads of the racers are often adorned with white canopies, proof that it is more about balance and agility than strength here. Well-we’re going on the water soon, and I got a nice spot on the photographers’ dinghy. That’s it, the regattas are over. As many as nine races were run and the situation changed. The Swiss Sacha Wallmer, thanks mainly to the last three races (three first places) overtook Bob Baier and won the regatta. In third place in the final ranking and thus new Italian Champion is Luca Maffessoli from Brescia, who is constantly present in the very first places of the ranking. He is not yet 25 years old, and he is good, nice and friendly. Congratulations. As I followed the races from the photographers’ dinghy, I was able to admire Wallmer’s splendid technique, which he flies with extreme ease. In the penultimate trial he gave one kilometer to the second. I raced on the Class A’s for more than 20 years, stopped in the mid-1990s due to overwhelming meniscus problems, but I don’t remember ever seeing such remarkable gaps. The widespread sentiment is that you have to insist on the flying stern because if you imbibe the right materials and the right adjustments you have an incredible advantage over those who have not yet gotten there. But it is hell. Not being able to fly is quite demotivating.

CLASS A, NURSERY OF GREAT SAILORS
However, the road seems set, and next year at the World Cup there will be fun to be had. All the good ones will come, from Australia, from New Zealand, from Holland. And it is a safe bet that they will be up front. It is no coincidence that America’s Cup syndicates draw heavily on the best A-Class helmsmen to develop their monsters and to race them. One for all? Such Glenn Ashby, a ten-time world champion, whom we saw in San Francisco steering the New Zealand wing.

EVERYONE TO THE WORLD CUP!
Well, now allow me some very personal coloring. Appeal: Vittorio Richelmy, Giulio Pennisi, Nicodemo Fedeli, Gastone Gherardini, Egidio Babbi, Alberto Babbi, Saverio Monina, Massimo Corbara, Antonio Lambertini, Claudio Gaiaschi, Aldo Pugnetti, and then Tamburini, Pirrini, Urbinati, Valerio, Michele Petrucci, Taddei, Spigoli brothers, Michelangeli, and many more–where the hell are you? Next year is the World Cup! The World Cup-you get the picture? What do you have better things to do from September 5 to 12, 2015? I have decided to buy a boat again, maybe an old junk, just to get my hand back on it, but I would like you to be there. Don’t be afraid, the environment is nice and healthy, there is no more controversy than there used to be, everyone here is friendly, at least it seems so. We make an avulse ranking for us zombies, we raffle off the usual bottles of wine, we remake the Peon Bulletin, our newspaper–we even make it daily…. It will be forbidden to fly but it will be allowed to say and do the wonderful shit we used to say and do…Even Genesis came together. Happiness is doing regattas on the A-Classes. That’s for sure. That’s all there is to it. Kisses and hugs.