Tried for you. Dufour 350 Grand Large: the vessel… without backstay

La Spezia – 310, 350, 382. At less than two meters long, the Dufour 350 Grand Large is the third model in the GL range launched by the French shipyard in the interesting and hard-fought 10-meter range in less than a year. Another vessel (like the 310 GL), ideal for those who do not feel like taking a boat license but want to sail: an evolution of the 335 Gran Large from which width and length have been increased. As soon as I come aboard, I am struck by theabsence of a backstay: a solution made possible by two quartered spreaders set very far astern and the attachment of the mainsails positioned as externally as possible, at the broadside. The absence of the backstay makes the cockpit even cleaner and allows uncluttered use of the fold-down aft swim platform. Also striking is the height of the mast, for a boat that has a cruising vocation: a sign of the hand of Umberto Felci, who by nature designs performance hulls (in this case with an edge) that need adequate sail plans. Having made these observations, the desire to try the boat on the water grows.

IN NAVIGATION.
We leave Porto Lotti accompanied by a light northerly wind (8-10 knots with gusts up to 12-14) that allows us to immediately hoist the fullbatten mainsail and unfurl the jib (planned to be self-tacking in the standard version, with the possibility, among options, to rig a rail alongside the deckhouse to rig larger genoa). We immediately set upwind and sailed toward the coast to go for a few gusts, These speeds rilvate: 5.4 knots average that coming out with acceleration from the gust became 6.5. The edge in the hull did its job: as soon as the pressure under gusts increased, the hull heeled until it rested on the edge: the day of somewhat gusty northerly winds proved perfect for testing this feature of Felci’s design. We put down and let go of the sails, sailing across the beam at an average speed of 6.4 knots, touching 7.3 when we enter a gust. We do not have a gennaker on board, although there is a dolphin rig on the bow with an attachment for the headsail tack, but we still decide to try the boat on the white-sailed grand lasco recording a speed of 6.1. We also report motor speeds , a Volvo Penta 30 hp. At 1000 rpm, speed 3.4 kn; at 1500 5 kn; at 2000 6 kn; at 2400 (recommended cruising speed) 6.6 kn. 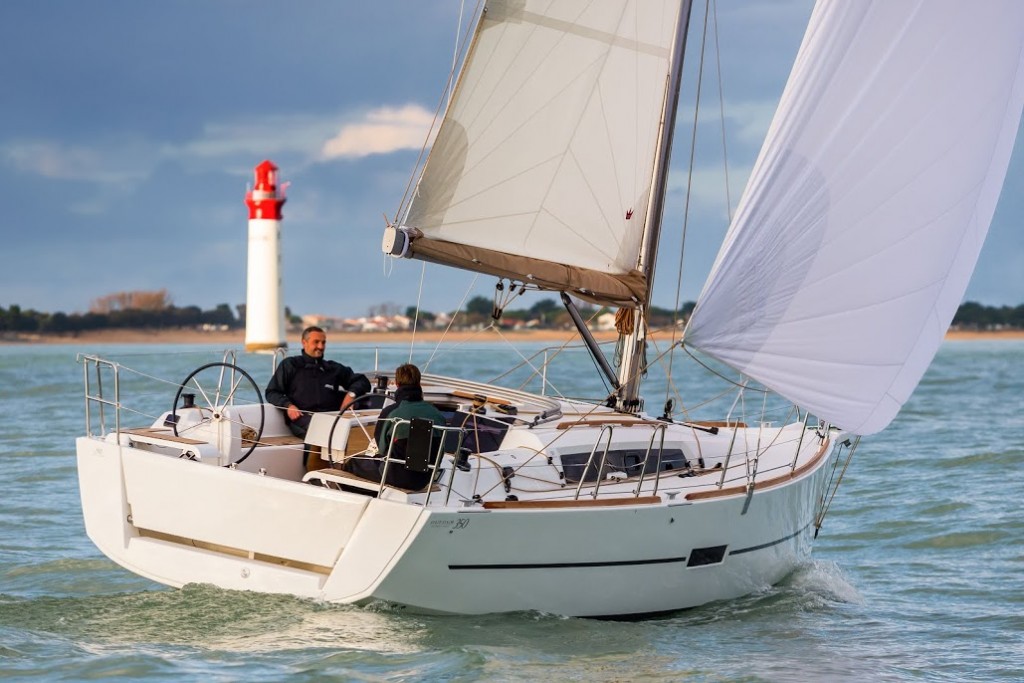 COVER
There are many on the deck, the solutions taken from the “range sisters” such as thepanoramic window on the deckhouse, the general cleanliness with all the maneuvers flowing on the squared deckhouse and that, to simplify life on board, are postponed in the wheelhouse area (with double wheel very thin to grip). To complete the ergonomics of the spaces, the moorings are at the broadside and the jib rails (optional) are flush with the deckhouse to have a smooth passage to the bow. Under the banner of safety on board, on the other hand, I note rather pronounced stanchion and sickle bar: a boat that not only looks to the Mediterranean, but is also designed for the waves of the Ocean. This vision also underlies the German-style circuit chosen for the mainsail sheet, which is doubled on both walls. Ideally, the helmsman, sitting upwind to better see the waves, has the mainsail sheet (also fitted with stopper) in reach on dedicated winch (convenient to let down under gust) and the genoa sheet sent back on the downwind winch. Two other winches are located on the deckhouse, near the companionway, for other maneuvers. A “seat” has been designed for the helmsman’s seat that can be lowered in front of the rudder wheel or held up and stopped at a dredge. A somewhat inconvenient solution, because when it is up the person at the helm does not have the space to sit sideways. In the bow, on the other hand, there is a large walkable area free from manvore. 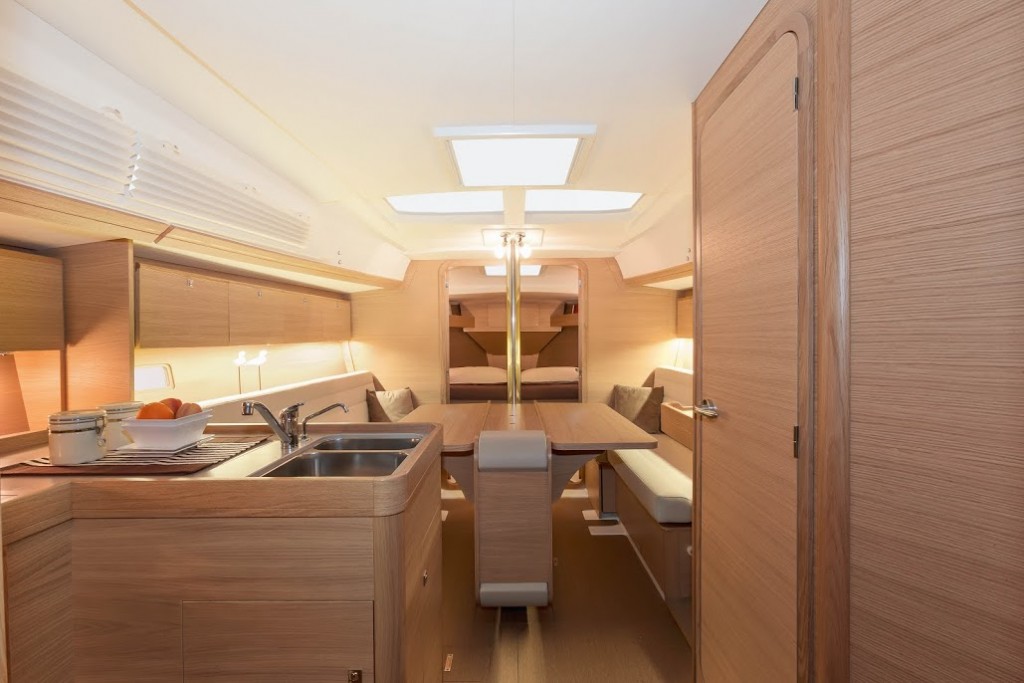 INTERIOR
Interior layouts include two or three cabins (the version we tested was a three-cabin with an open-plan forward master stateroom). In the first case (two cabins) there is a large aft cabin and a double cabin in the bow, a spacious bathroom, and a traditional chart table. In the three-cabin version, on the other hand, we find two aft cabins and the retractable chart table on the starboard broadside: when not in use it can be can be lowered and become part of the sofa to form an additional berth. In both versions, the kitchen is L-shaped, there are two sofas on both sides and a central dining table.