Three Italians at the 2016 Vendée Globe? It is not utopia!

It will be a blue-tinged Vendée Globe in 2016. The nonstop solo round-the-world race, starting from Les Sables d’Olonne in the French department of Vendée, could see as many as three Italians at the start: there will certainly be Andrea Mura, our 2014 Sailor of the Year, who announced, less than 40 days before the start of the Route du Rhum (in which he will participate with his old and trusted boat, the Open 50 Vento di Sardegna), that he has begun construction of a new IMOCA 60 (IMOCA stands for International Monohull Open Classes Association): the design is French (Verdier/VPLP), the construction Italian, entrusted to the Persico shipyard in Nembro (Bergamo), from which the various Luna Rossa and hulls for the entire fleet of new VO65s have come. Alessandro Di Benedetto, in his second experience at the Vendée on Team Plastique, will almost certainly be there, and, if all goes well, Giancarlo Pedote, supported by Prysmian and other sponsors, could also join him. Perhaps on a used IMOCA 60 (since the timetable for construction is tight as Vendée qualifying races begin next year). All three, by the way, are off to the Route du Rhum, a historic solo transatlantic regatta departing Nov. 2 from St. Malo. 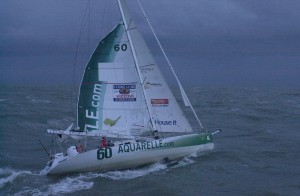 THE STORY OF THE ITALIANS AT VENDEE
A Vendée with three Italians until a few years ago would have seemed like utopia, but now we can really hope: the Italians have learned to sail “au large,” as recent results on Mini 650 (Pedote, Zambelli, Bona) and Open 50 (Mura himself) have shown. Vittorio Malingri took part in the second edition in 1992-93. aboard Everlast/Neil Pryde Sails, but failed to finish it due to rudder failure. The most “crowded” edition by our people was in 2000-01, which saw Simone Bianchetti on Aquarelle.com and Pasquale Di Gregorio aboard Wind at the start. Bianchetti finished 12th (taking 121 days, 1 hour and 28 minutes), Di Gregorio 15th (158 days, 2 hours and 37 minutes).

THE BOAT OF WALLS
In Mura’s case, it will be the first time for a “new” Italian boat to compete at the Vendée-Globe, a first and an incentive for the entire Bel Paese sailing movement. “We are building the fastest boat possible,” Mura explains, “we have the resources and we want to race to the best of our ability. The boat will be built in Italy, at the Persico shipyard, and it will allow me to race to do the best possible result, in the most difficult challenge for a sailor and sailmaker, like me.”
Andrea Mura’s team, which will maintain the hard core already seen with Vento di Sardegna, will be supplemented by some new and qualified professionals expressly dedicated to the new boat. “But the project,” Mura concludes, “will not be commercial, but sporting and human, like the current one…in my group there is no room for arrogance and hysteria, we run for our values, which are passion, identity and technology. This is the most difficult challenge I have ever faced. And it is also the crowning achievement of a lifelong journey“. 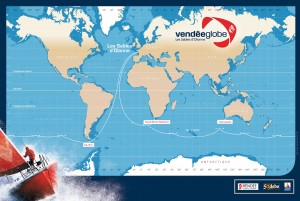 THE TOUGHEST OF REGATTAS
The race begins and ends in Les Sables-d Olonne, in the French department of Vendée. The route is basically a circumnavigation on the clipper route: from Les Sables-d Olonne, down the Atlantic Ocean to the Cape of Good Hope, then clockwise around Antarctica, leaving Cape Leeuwin and Cape Horn to the left, finally back to Les Sables d’Olonne. The race will start on November 12, 2016 and will end in February 2017: it is designed so that participants can face the Antarctic Seas during the austral summer. The Vendée-Globe is a great human adventure, before sports and technology: called the Everest of sailors, it takes the participants’ psycho-physical and technical abilities to the limit.