There are three Italians on the Rhum route

That the Route du Rhum is not a feat within everyone’s reach is a lesson from history: since 1978, the four-year solo race from Saint Malo, Brittany, to Point-à-Pitre, Guadeloupe, has been contested by the greatest ocean sailors ever. From Olivier De Kersauson to Michel Desjoyeaux, from Laurent Bourgnon to Lionel Lemonchois, from Robin Knox-Johnston to Franck Cammas, just to name a few (and they are very few). And there are those who paid the highest price, such as Alain Colas, who in the first edition wrecked and was swallowed by the abyss with his Manureva, Eric Tabarly’s former Pen Duick IV. Speaking of Tabarly: it was at a Route du Rhum, the 1986 Route du Rhum, that he was forced to call for help for the first time in his career, as he was going down with the maxi trimaran Cote d’Or. Together with the Ostar (Plymouth-Newport) it is thus the race that created the myth of solo ocean sailing. A necessary introduction to explain to you that it will be no joke what they will be facing Andrea Mura, Giancarlo Pedote and Alessandro Di Benedetto (each in a different category) starting November 2, when the cannon shot of edition number ten was fired: 3,543 miles and 20 days of hard sailing. Three “paisanas” in the Atlantic, just as in the 2010 edition (in which the aforementioned Mura, Marco Nannini and Davide Consorte took part). Three sailors who, between now and 2016, will have as we shall see a common path. 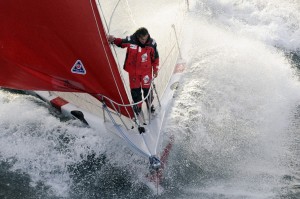 ANDREA MURA LOOKING FOR ENCORE
Andrea Mura, whom we elected 2014 Sailor of the Year, not only participated in 2010, but won in the “Rhum” category (since 2002 the regatta has been open to multiple classes), becoming the first Italian to succeed in the feat. This year he will try to repeat his success aboard his trusty squire, the Open 50 Vento di Sardegna-a victory would be the best way to bid him farewell. “Take away everything but my Wind of Sardinia,” the Cagliari sailor had told us a few months ago. Instead, the idyll that began in 2007 (when Mura bought the boat, built by Umberto Felci at the 2000-01 Vendée Globe, for Pasquale De Gregorio), crowned with many successes (most recently the triumph in royalty at the 2013 Ostar), has come to an end. But, as the saying goes, a door closes and a door opens: construction has begun on the new IMOCA 60 (French design by Verdier/VPLP, Italian construction, entrusted to the Persico shipyard) with which Andrea will take part in the 2016 Vendée Globe, the non-stop solo round-the-world race-starting from Les Sables d’Olonne (France)-that represents the dream and the goal for every ocean sailor. 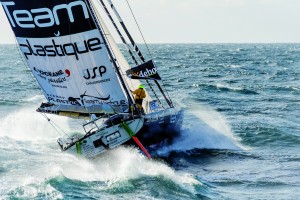 DI BENEDETTO IN A DIFFICULT CATEGORY
At the Route du Rhum (and, as it happens, at the next Vendée as well, for the second time) there will also be Alessandro Di Benedetto, the Italian with a French mother who enjoys absolute sympathy among French soloists and has moved beyond the Alps (in fact, he lives in Les Sables). His regatta takes place within the category reserved for IMOCAs, aboard Team Plastique, with which he placed ninth in the Transat Jacques Vabre (from Le Havre, France, to Itajaì, Brazil) in 2013 along with his friend from Bologna, Alberto Monaco, and finished 11th and last in the last Vendée. He can do well this time even though the competition is fiercer than ever: along with Di Benedetto on the starting line are the likes of Tanguy De Lamotte, Vincent Riou and François Gabart. 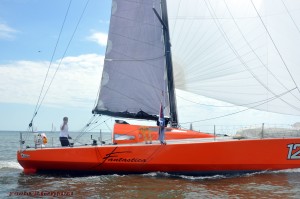 PEDOTE LEAVES THE OLD WAY FOR THE NEW…
Last but not least, our own Giancarlo Pedote: the Florentine sailor has accustomed us to greatness: aboard the Mini 6.50 Prysmian, David Raison’s former “Teamwork” (the proto with the rounded bow), he has racked up an incredible string of victories. Five regattas, five first places: Lorient-Bretagne Sud Mini, Pornichet Sélect, Mini en Mai 2014, Trophée Marie-Agnès Péron and Les Sables-Azzorre-Les Sables. Giancarlo is definitely the strongest Italian minnow, and even in France, the home of ocean sailing, he has depopulated. A person of great humility before he is a complete sailor, he does not know the concept of “sitting on his laurels.” So off he went, on the Class 40 Fantastica made available to him by “philanthropic” owner Lanfranco Cirillo, to seek the feat at the tenth Route du Rhum, in the most crowded category (39 boats at the start). For Pedote this is a very important test of maturity, in view of his more than likely participation in the Vendée Globe on an IMOCA 60 (supported by Prysmian along with other sponsors).

AN APPETIZER OF THE VENDÉE GLOBE?
Mura, Di Benedetto, Pedote. To them goes a huge “in the c… to the whale” for the regatta, we are left with space for reflection. The first two definitely, the third most likely, will also take part in the Vendée Globe. A world tour with three Italians until a few years ago would have seemed like utopia, but now we can really hope: the Azzurri have learned to sail “au large.” Vittorio Malingri participated in the second edition in 1992-93 aboard Everlast/Neil Pryde Sails, but was unable to finish it due to a rudder failure. The most “crowded” edition by our people was in 2000-01, which saw Simone Bianchetti on Aquarelle.com and Pasquale Di Gregorio aboard Wind at the start. Bianchetti finished 12th (taking 121 days, 1 hour and 28 minutes), Di Gregorio 15th (158 days, 2 hours and 37 minutes)