The incredible story of Federico Fornaro and his Jolie Rouge, found after two weeks! 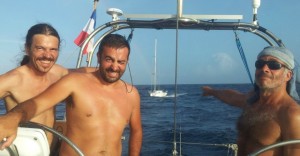 Federico Fornaro, a Roman skipper who took part in the 2013 Mini Transat, saw his dream of finishing the race dashed 300 miles from Guadeloupe. Here he told firsthand accounts of his accident.

The failure of both rudders had forced him, once he had ascertained the serious danger to his safety, to abandon his Mini 6.50 Jolie Rouge to embark aboard the Imaginaire, one of the six support craft that was following the course of the race step by step.

Losing one’s boat, for a sailor, is like losing a loved one. Frederick rolled up his sleeves and, once he came ashore and got over the disappointment of not finishing in what was probably one of the toughest editions of the Transat (sailing directly from Sada, Galicia, to Pointe-à-Pitre, Guadeloupe, with no intermediate stop in the Canary Islands), he set out in search of his beloved 6.50. And he managed to find it, just on Christmas Day, on the reef of the Caribbean island of Barbuda: a little bruised, but all in all in good condition after two weeks adrift. A beautiful sea story that Francesca Pradelli told in an article that appeared in Fatto Quotidiano that we repost below:

THE EPILOGUE OF FEDERICO
“It is Dec. 11, when from the sailboat that rescued him, Frederick writes “what could be called the Epilogue, the closing of a book never written, the end of an adventure. I will not cross the finish line in my Jolie Rouge, but aboard a rescue boat that came to my rescue yesterday, saving me and sealing my boat’s fate: abandonment adrift in the Atlantic.” After 30 days at sea, just a few miles from the finish line, a breakdown damaged the rudders and the Roman sailor was forced to call for help. “I heard the tiller lock up, the left rudder blade smashed the steel cheeks that weld it to the transom, the blade slamming threatening to open a hole in the hull.”

“I HAVE ABANDONED YOU, MY COMPANION.”
Frederick disassembles the damaged blade and continues to sail with one rudder, hoping not to strain the other blade too much. “Hoping to no avail, the starboard blade fails to hold by itself, and it too at the beginning of the night smashes the steel cheeks in such a way that it takes away all hope of any attempt at repair. The merry-go-round begins, the boat spins madly on itself.” Fighting Federico, he does whatever his intuition, experience, and the adrenaline of the moment suggest. Unnecessarily. “I am now helpless, I don’t even curse anymore because I can no longer turn my anger into action, I can no longer fight.” Help arrives and Frederick sees “Jolie angrily walking away. I abandoned you my companion, I sacrificed you so that I might save myself…I still watch Jolie roll through the waves and a wound opens in my heart that I already know I can never heal.”

THE LAW OF THE SEA, A GOD DEAF TO PRAYERS AND BLASPHEMY

A loner, they say, is never such: his boat is his traveling companion, he has a soul and a voice, invisible to the eyes of others. Then abandoning her in the middle of the sea is like letting a friend drown in the waves. “Do you want to call it Destiny? Misfortune? Bad luck? Or is it simply the law of the Sea? Only God who is as deaf to prayers as to blasphemies, Only God who does not allow you to rely on his graces or his mercy, and who forces you to rely only on your own strength making you solely responsible for your fate. But it is in this way, mile after mile, day after day, through gales, depressions, bonanzas, that the Ocean strips you of the common garments of man and forges the ‘soul of a sailor. A sailor who alone must overcome the anguish of losing his boat, and he will do so as he has done to the last in these ocean days: turning anguish into wrath, wrath into reaction, reaction into strength, strength into action, action into miles, miles and more miles, pointing west and looking beyond the finish line, beyond Guadalupe, toward another horizon made still of sea.”

HAPPY ENDING OF A CHRISTMAS FAIRY TALE
Frederick’s eyes, upon arrival in Guadalupe, express a tired and deep sadness. But at the bottom of that anguish, there is a glint, a small hope: finding Jolie Rouge and saving her from the cruel fate of finding eternal rest at the bottom of the ocean or in the clutches of sharp rocks. And as in fairy tales, on Christmas Day comes the happy ending: “La Jolie Rouge is safe!” shouts Frederick from an email to the many friends who have followed him all these days. “The recovery was rocky, an adventure in the Caribbean Sea. When I had to abandon the boat 300 miles from the Antilles, I left the satellite balise running, it kept emitting a gps signal and so every day I was getting the coordinates of the drifting boat.” A real treasure hunt then began: “The boat propelled by east-southeast winds was advancing at the speed of a knot with a course that led over the West Indies. I went to the island of Saint Martin, which being in the north seemed to be the best starting point to begin the search.”

THE HELP OF MAN

Madness? Tenacity? Romanticism? Perhaps a little bit of everything drove Frederick. “The wind rises to 30 knots forming a nice sea. I have difficulty finding boats willing to set out on what would be a pretty challenging upwind. Then I remember Manu’, a Breton sailor who is up and down the Atlantic avoiding land as much as possible, and he offers to go.” And so it is that this deus ex machina with sun- and salt-parched skin restores the morale of Frederick, who together with “two other great sailors in search of adventure,” sets out in search of the small sailboat. “By now it’s a race against time, the boat could either be intercepted by some local fisherman or worse smash into the reefs of Barbuda.” After a night of sailing, at dawn, the first leap to the heart: “Near the northeastern coast of the island we see a mast without sails appear and disappear on the waves that go crashing over the reefs. The Jolie seems to have stopped just before the breakers.”

But it is too dangerous to approach with Manu’s boat; fishermen must be found to accompany him. “We go ashore and find a village of a handful of low houses, a small bar and the immigration office where we are forced to go to fill out stacks of stamped papers. Of the stamp officer, however, there is no sign; we pick him up half drunk in a Santa hat at the bar counter.” It might make one smile at the scene if it were not tragic.

THE RECOVERY OF JOLIE ROUGE
“A small group of local fishermen agree to take us out in their motor launch, but not before putting in gasoline, which means losing more hours to go to the other side of the island to fill the jerry cans.” We row swiftly over the crystal-clear water until “we first spot the mast, stationary at an angle, then the boat lying on its side on the reefs. As if that weren’t enough, other men on a barge try to drag Jolie away. Amid shouts and cursing I jump on Jolie and ditch their lines, they are outnumbered and quickly desist, but the real looters arrived even before them and had time to steal the generator, gps, miscellaneous equipment and even the freeze-dried food left over from the crossing.” The boat has small fractures, but “has a tough rind” and is taken to St. Martin and pulled into dry dock. She is saved. “Now I can go back to Rome, happy that I was able to change the ending of this story. But is this then really an ending?””