TEST Hanse 505, anatomy of an “easy-cruiser” 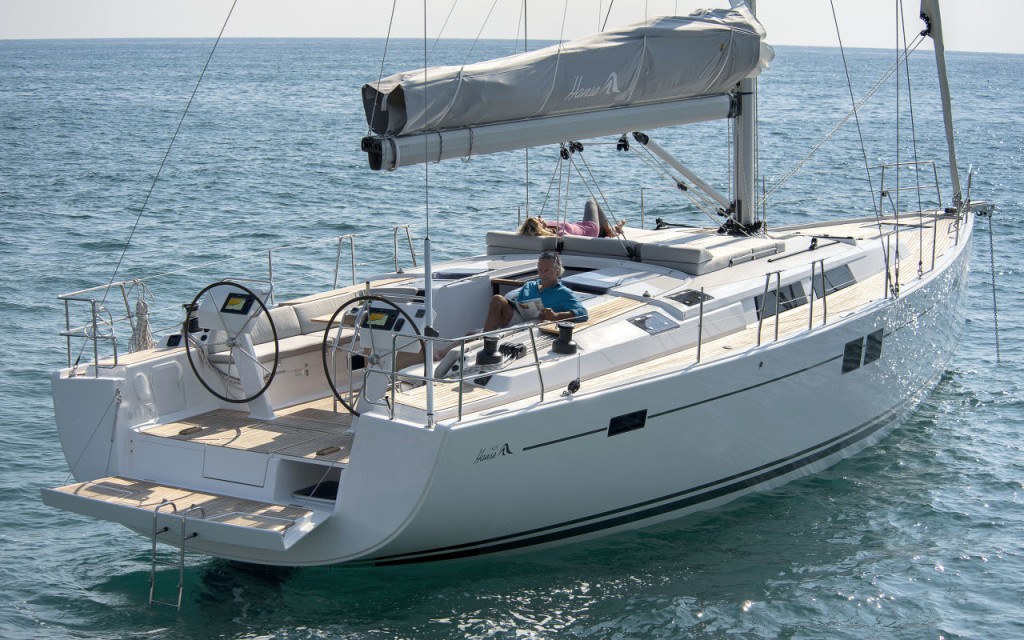 The sky is blue over Lavagna. And, hear hear, there is also a pretty good syrinx: a rarity, on a summer afternoon in the Gulf of Tigullio (called by the locals “gulfu dei nesci,” or of the fools, because it was the refuge of sailors who were afraid of the north wind in the Gulf of Genoa, when they had to wait to unload in port, in the days of the leudi). I came to try out the new Hanse 505 from the pencil of Judel & Vrolijk, which, like all the boats churned out by the German shipyard, makes easy sailing and comfort on board its cornerstones. The lines are both elegant and solid, as if to visually communicate the boat’s stability. The hull is hand-laminated in vinylester resin, and is constructed of balsa sandwich reinforced by a GRP grid. Accompanying me on the test were only two people, Andrea and Chiara Napolitani (of Cini&Webster boating services), so as to test the actual ease of running the 15-meter even with a small crew. 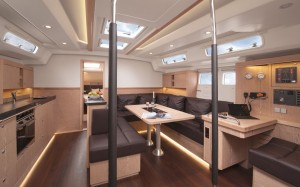 THE INTERIOR.
Before setting sail I take a look at the interior: there are many configurations offered by the shipyard, in this case the layout is standard, with extensive use of Italian oak wood. It starts with a large and spacious forward master cabin, equipped with a bathroom and separate shower stall, featuring good light and ventilation. In the dinette, to the left, is the accessorized galley, fronted by an additional small table that not only provides some storage space (by the way, there’s plenty of it on board; Hanse’s people haven’t wasted a cubic inch!) but also serves as a bottle holder and second work surface and is equipped with a handle for added safety when cooking while underway. To starboard, an L-shaped sofa and other seating that laps against the aforementioned countertop surround the large folding main table. The chart table, also to starboard, is of the traditional type: proceeding aft, I am amazed to note the spaciousness of the port shower compartment, equipped with a sink and dedicated seating. On the other side, however, there is a single bathroom. Two double aft cabins complete the layout. 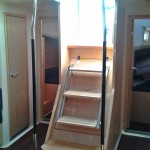 Access below deck is easily via a 54-degree sloping ladder and two leather-covered metal “supports” that, while they take away some space, are really convenient for safe descent in rough seas.

Other possible configurations include a single berth or technical area instead of a shower compartment, two double cabins instead of a master cabin (ideal for charter companies). Depending on your use of the boat, there is a layout for you. Personally, for top comfort cruising, I find the standard layout the most fitting. Endless choices of interior woods and furniture, as well as upholstery colors, are also available. 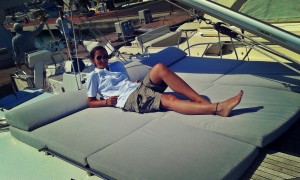 THE DETAILS THAT MAKE THE DIFFERENCE

Don’t call me a male chauvinist if I take the liberty of recalling a phrase I had heard uttered during a rehearsal some time ago: “In the end, women buy the boats.” Meaning that it is the shipowner’s wife who gives the final go-ahead for the purchase, once some details are evaluated that to the man, at first glance, do not jump out at him. Andrea is not unprepared on the subject and shows me a real treat: the three large cushions that transform the deckhouse part aft of the mast into a very comfortable sundeck. Napolitani explains, as his daughter Chiara models for me, “I’ve been selling boats for years, and the most frequent question I’ve been asked is: but where can I sunbathe on board? Well, there you have it!” The only “cons”: the three pillows take up quite a bit of space, and you will inevitably have to stow them in a cabin. Then there are other details, such as the cup holders built into the cockpit benches right next to the helmsman. Trifles, you may say, but it is the details that make the difference. 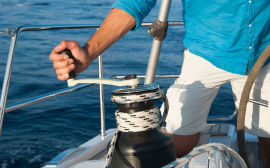 Let’s repeat, Hanse are boats geared toward easy sailing: so in theory you can steer them yourself. The self-tacking jib (optionally replaceable with a 105% overlap jib, since the rails are already set up) is a “must” for the shipyard, and all rigging (hidden below deck) is deferred near the two helmsman’s stations, on two winches that, optionally (as in our case), can be electric (two more manual winches are added to them at the bow). Specifically, Lewmar’s Revo’s, with which you can both caulk and let down the sails automatically. Hoisting and lowering the mainsail, with lazy jacks and lazy bags, is a breeze. The cockpit, which does not shine in terms of spaciousness (a mandatory design choice if you want ample volume below deck), features a respectable folding table. The sprayhood is wide and wraparound so that it provides the best protection during “tough” sailing. Interior brightness is provided by 29 windows, hatches and portholes. 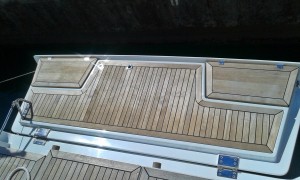 At the stern, the swim platform converts into a comfortable bathing platform and, when pulled up, has two folding areas that convert into seating for the helmsman. The standard masting is Selden (the mast is 22.10 meters high from the waterline)’ the Elvstrøm sails (total sail area 129 sq. m., with mainsail of 66) and B&G instrumentation (Triton series). There are then many variations based on the “packages” offered: the “entertainment” one also includes the Fusion audio system, with which you can listen to your favorite music anywhere on the boat, the “cruising” one the possibility of having both bow and stern maneuvering propellers. 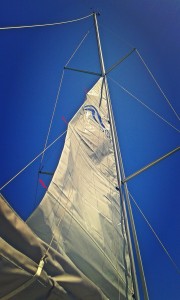 Casting off the moorings. The first thing that jumps out at me is the extreme ease of steering that the Hanse 505 has: not only thanks to the bow and stern thrusters, but also by simply taking advantage of the evolutionary effects of the left-handed propeller. I find that maneuvering in tight spaces is easy even with a 15-meter that weighs 14 tons. And another detail that strikes me is the quietness of the engine, a Volvo Penta 75-horsepower: “And just think, we haven’t installed the soundproof panel in the engine compartment yet!” Chiara points out. I push hard once out of port and at 3,000 rpm the boat hits 9 knots. At cruising speed (about 2,500 rpm), I note a top speed of 8.2 knots. 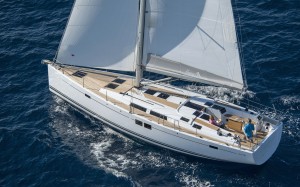 But it’s time to sail: as expected, despite the 10-knot sirocco and a bit of “bulesumme” (Ligurian for “swell”) the Dacron mainsail, maneuvered by a German-style double sheet system comes up without any problem. Just be very careful to be perfectly upwind to prevent the sail from getting caught in the lazy jacks. In solitaire, you can set the autopilot et voila, les jeux sont faits. Even easier to unroll the self-tacking jib, with the standard jib reel. We set the sails and set to windward: I know that the boat’s VPP (Velocity Prediction Program) gives 42.1° as the optimum angle (we are on a cruising boat, don’t expect America’s Cup angles), with 7.4 knots of speed for a 16-knot wind. I get to tighten up to 45°, and with 10 knots of southeast (and a bit of a wave in the bow) I can reach 6.6 knots, which becomes 7.5 when I get to 80°. The speeds recorded at 120° (5.8 knots in 9 knots of wind) are not reliable, because we are white-sailing and do not mount asymmetrical or code-zero type sails (for which a kind of micro-bompressor is set up). The double rudder has good responsiveness and the boat, despite the wave, performs well and is stable, thanks to the 2.38 m keel (there is also a short-keel option, 1.98 m draft). 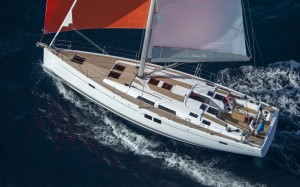