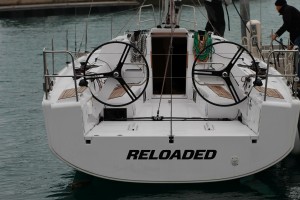 It will be a matter of small size (10.60 meters), it will be confirmation of Rob Humprheys’ good intuition in designing boats with oceanic characteristics that are increasingly reminiscent of the Open 70 (large beam and increasingly pronounced edge), it will be the racing S version that tends to maximize performance. The result is that the new Elan 360 is a fast, fun boat that is perfect for those who on a cruise don’t just want to sunbathe but who enjoy running the boat and find satisfaction in engineering fine adjustments.

RACING ATTITUDE
I was in Portorož (Slovenia) to test in person the performance of the new 10-meter homebuilt Elan, and despite the fog that enveloped us all morning, we were lucky, because a pleasant breeze soon picked up (up to 12 knots) that allowed us to complete the test and that highlighted some important features of the boat, first and foremost, its racing bent made immediately evident by certain details such as the dyneema backstay, dyform shrouds and carbon bowsprit.

THE HULL
The hull I tested together with Luigi Coretti of Adriaship and Matic Klemenc, Elan’s marketing director, was the S version of the model, that is, the one designed for the regatta and for the more sporty owners with Hull and deck 100% infused and constructed of vinylester resin and interior that instead of plywood is monopane, all of which lead to significant savings in the overall weight of the boat. 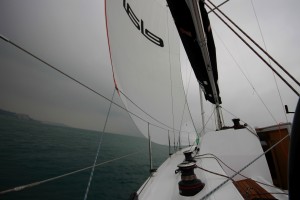 THE PROOF.
We had direct evidence of the good performance of the boat, which upwind without a wave in 12 knots of true wind recorded a speed of 6.2 proving sensitive on the rudder and very balanced. Under gust the hull skids until it rests on the edge, then accelerates and picks up speed as smoothly as if she had started on a track. Good performance also in the turn where we exit the maneuver well without losing significant speed.

UNDER GENNAKER
When the wind drops, we decide to hoist the gennaker, a maneuver that they carry out with ease in two while I remain at the helm, we put ourselves of slack and with 6.5 of real I register a speed of 5 knots which becomes 5.5 when barley To test performance on the traverse. 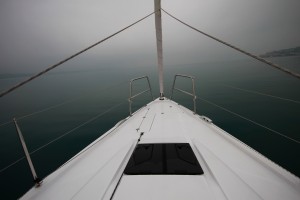 HEAVY INHERITANCE
The Elan 360 replaces a highly successful boat such as the Elan 350 from which it differs in a few innovative ways: the composite companionway is structural and no longer teak, all the hatchbacks are flush deck to have a cleaner deck; the cockpit has more convenient access below deck thanks to a fold-down entrance step (which can be closed in challenging sea conditions and opened in port or quiet sailing) that makes it easier to descend, leaving room for a shallow ladder; the mainsail track is no longer curved as on the 350 but is flush slightly recessed for better livability; as for the interior, there is different styling with wider doors (the version we tested features two cabins and a bathroom characterized by a large compartment for stowing oilskins).