Sea whirlwind, what a scare! But would you know how to avoid it? 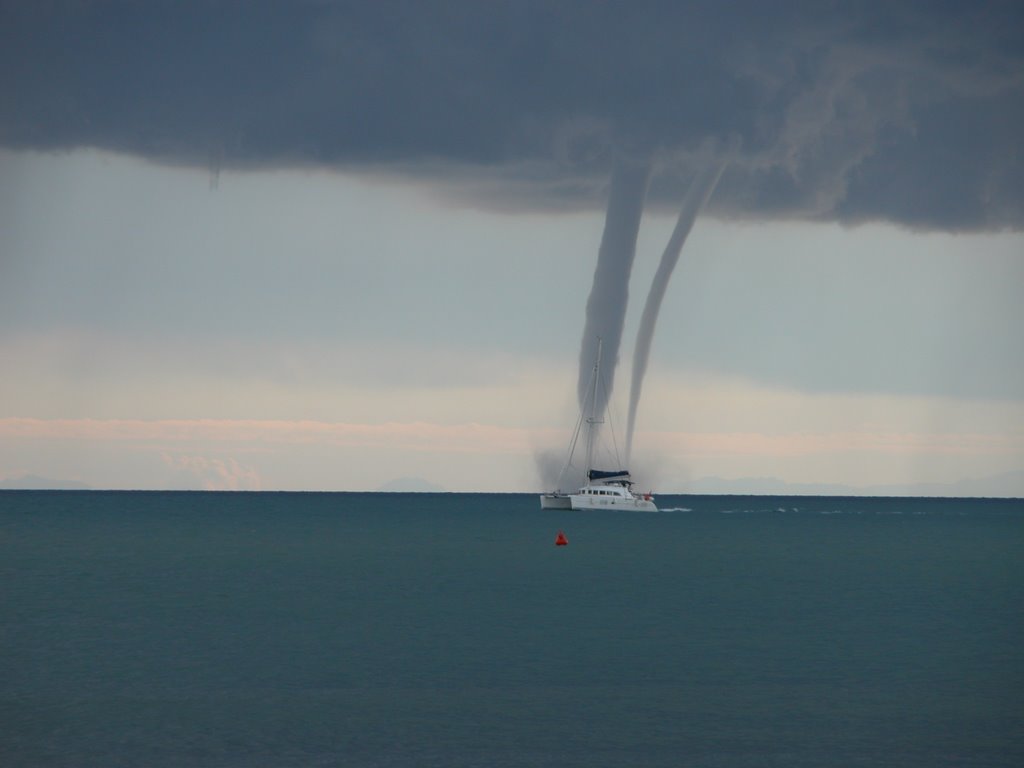 Aboard this catamaran, off the coast of Castiglione della Pescaia (Grosseto, Italy), they had a really bad time (the photo is deceptive, because the waterspout is behind but still close by). It can happen more often than you imagine to be hit by a waterspout. In a nice article that appeared on the website mooringionline, it is explained how they form and especially how to deal with the situation if you are surprised by a waterspout.

THE WATERSPOUT
There is often confusion between waterspouts and waterspouts: the latter, the article says, is a phenomenon of smaller size and scope and “is generated over bodies of water, such as seas and lakes, and is unlikely to reach land, as it breaks up when it encounters it. They can have a diameter of several tens of meters and winds of up to 100 km/h.”

WHEN DOES IT FORM?
The conditions for it to be generated are not all that rare: “All that is needed is a cumulus congestus (cloud with great vertical development), high sea surface temperatures (capable of providing considerable energy to the cloud system), and the meeting of warm air ascending from the sea and cold air descending from the disturbance. At that point, it is done. A swirling motion favored by the absence of obstacles in the sea can originate.”

WARNING SIGNS
When you are sailing and the weather gets worse, in order to understand whether the phenomenon (which is very unpredictable anyway) may occur nearby, you will have to keep your eyes open and carefully scan the sky: “before touching the sea surface, the waterspout is manifested by the appearance of a funnel cloud, called a funnel cloud, from the base of the cumulus. At high moisture rates in the surface layers of the atmosphere, the funnel evolves from the typical flattened base of the cumulonimbus toward the sea surface until it reaches. Meanwhile on the water appeared a light disk surrounded by a dark area, indeterminate in shape; then spiraling bands, light and dark, branching off from the dark spot; and then a dense swirling ring of water spray rising toward the base of the cloud. Only when the flow of hot air in the trumpet is exhausted, usually in 15 to 30 minutes, can the nightmare be said to be over. The funnel dissipates, and it only remains to check that there are no other ‘funnel clouds’ nearby.”

HOW TO AVOID IT.

The best way not to find yourself in the situation in the picture above is “not to go out boating when the synoptic charts show clear presence of atmospheric instability, especially during late summer and fall when water surface temperatures are higher. If you just couldn’t make it to stay in port remember that you are dealing with an unpredictable and often the direction of the trumpet is not that of the prevailing wind: if its shape is that of a vertical cylinder, it means that the wind between the ground and the base of the cumulonimbus is more or less constant in intensity and direction; if, on the other hand, the trumpet takes very sloping shapes, it is likely that the wind on the ground is different from that blowing at the base of the cloud. Then take care that the base of the funnel is not tilted toward your location. In this case move off the collision course..

And keep an eye on the barometer, because the passage of the vortex is characterized by a sharp and sudden drop in atmospheric pressure.” If possible, it is better not to move away from the coast. “On the contrary. it is necessary to set course to the safest port immediately, remembering that the waterspout on contact with the ground breaks apart. In case you find yourself out to sea, it is best to lower the sails, secure the entire crew below deck, but without closing the hatch, as this could cause the portholes to implode. Also, in case the waterspout is approaching, it is a good idea, just before being hit, to launch a distress call with your coordinates. In any case, most of the time the damage is minor.”