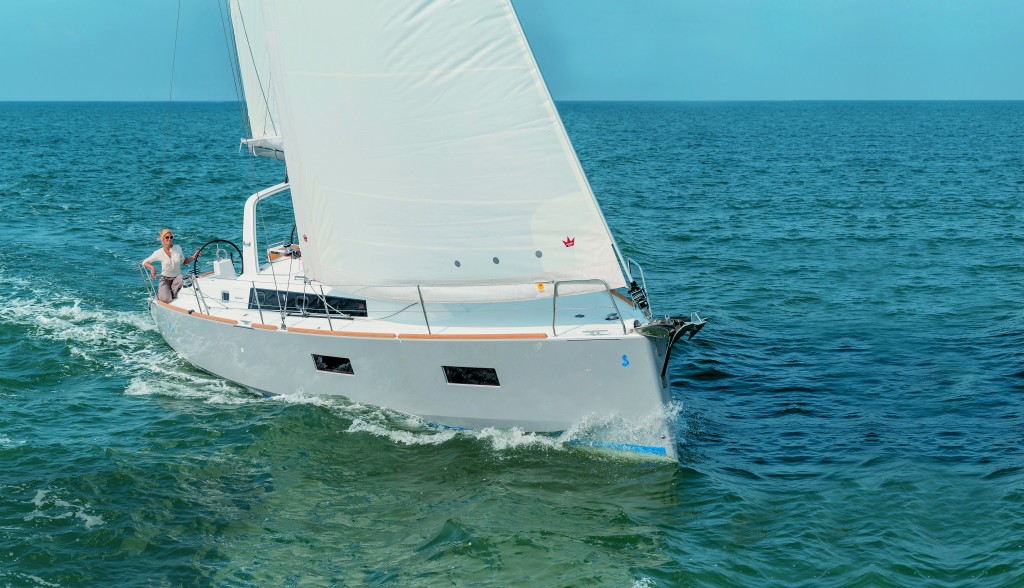 Genoa Boat Show, October, I am looking at a boat that could be revolutionary, as have been so many other products from Beneteau, a shipyard that has always had the strength not only to work on the customer, a widespread mode, but to solicit their desires with concrete innovations. I might even call it innovation, although that magic little word is so overused these days. I look and regard, to the angular fairings we are now accustomed, to their somewhat boxy shapes so far removed from those that only a few years ago were the pride of the designers, the demonstration of their ability to build on paper these fantastic three-dimensional objects, were days spent defining an inverted cavallino by moving pearwood planks and lead weights by a few millimeters. Other than 3D modeling. A few months later I review and sail on an Oceanis 38 in Miami: it shows almost none of these ancient suggestions: it is boxy, simple, even stubby. The broadside windows are simply quadrangles. I see the suggestions of ocean crossers of all classes in that edge that makes the broadside vertical, underneath I like that there is a return to the stripped-down function of the decorations. It has a bit of the effect of Giugiaro’s first Panda, a great little car, but cut with a hatchet. The size around eleven meters is the first that allows for true habitability with the layout built around two aft cabins, and in fact in its history of innovation Beneteau with its First 35, the one of many years ago, opened this way, which is still the most exploited today to enjoy the interior volumes under the cockpit in full. 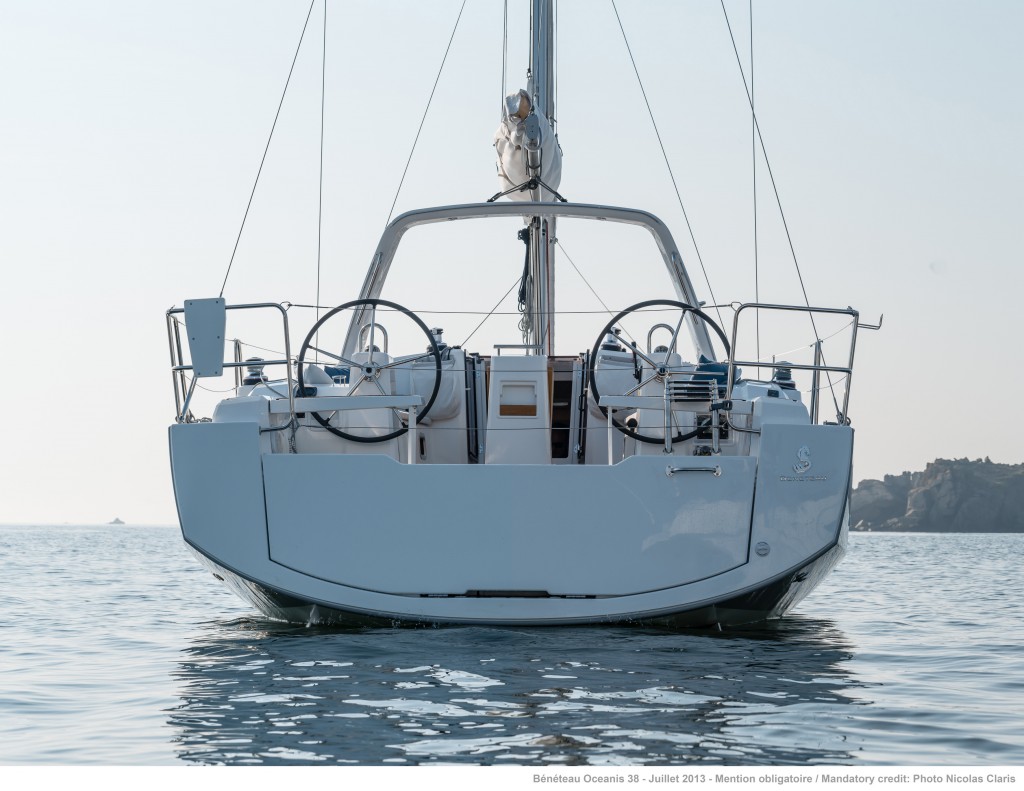 AN INNOVATIVE PROJECT
The hull signature is by the Finot – Conq studio, who have always interpreted average cruising measurements well. What’s more, Jean Marie Finot has always theorized the “little upwind much slack” hull for cruising, rightly stating that sane cruisers prefer a quick gybe to a long, counter-marine shower. Speaking of the engine, when we finally get out of Miami harbor we barely hear the buzz of the Yanmar 29 horsepower, it is the right engine, neither too much nor too little, at full throttle with 3600 rpm the log reads 7.6 knots, around 2800 rpm we cruise at 6.8 knots which we “christen” to be the right transfer speed. When powered, it has a fairly stable trim, the two blades are far from the propeller and do not feel the flow, it turns on itself with ease, the crosswind has a noticeable effect that the helmsman must calculate in maneuvering, especially in reverse gear. First impression after a few dozen minutes of sailing: theOceanis 38 is a boat for outdoor living. The width at the stern generates a cockpit with plus-size measurements, table, benches with padding (optional, of course), and an opening swim platform are all elements of great livability. There are the right things for both sailing and enjoying breaks in the roadstead, eating under the big bimini, topics too often undervalued. It is the details, as always, that reveal the capabilities of the technical offices. I like the two liftable benches for the helmsman, which when raised leave a true terrace on the sea at the stern, and the raft locker, below the deck but in a position from which it is easy to move it. It also manages to find a reason for the roll bar, an unhelpful sign of boat self-fashioning that here performs useful functions, such as supporting the rafter that would otherwise end up too far forward on the deckhouse or in the cockpit and beginning the modular bimini top, another element now necessary on a cruising boat, especially for the U.S. market like the one I climbed on. There are three elements: the spray hood, the actual bimini on the wheels, and an awning that connects everything by protecting the entire cockpit from rain and sun. 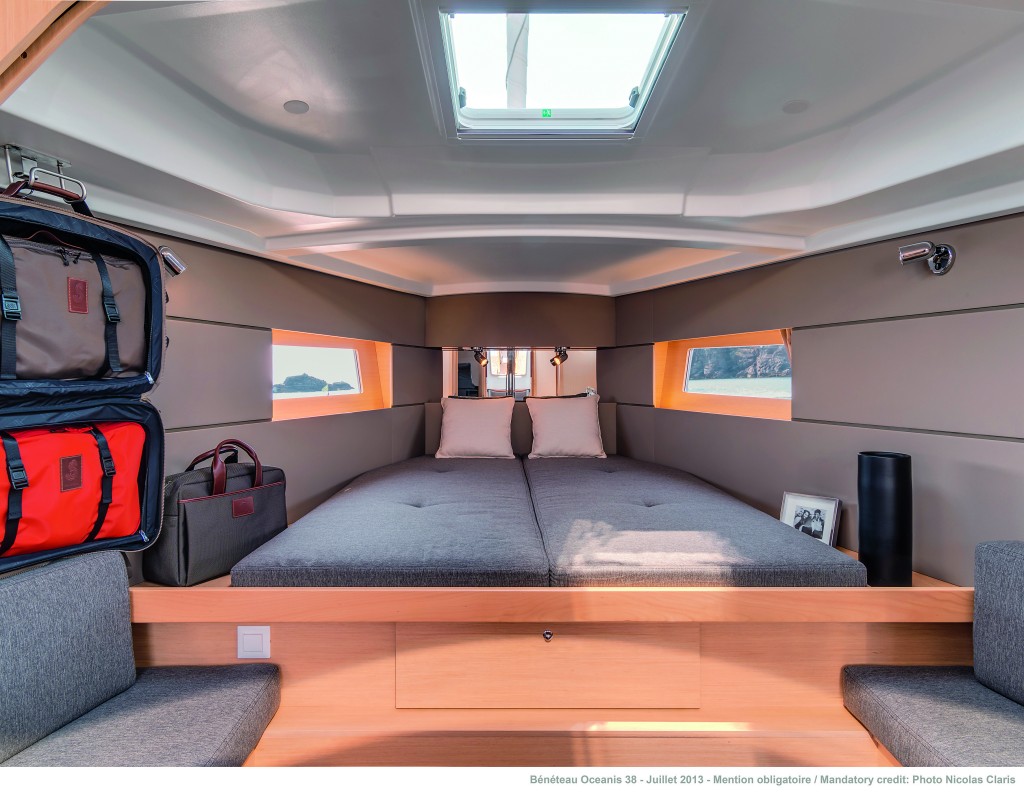 The signature interior is by Nauta Yachts., a Milan-based studio that began its collaboration with the French brand a few years ago and proves itself capable of ranging from the world’s largest pleasure vessel, the megayacht Azzam (not to be confused with the Volvo 65 you saw in the June issue of GdV) to production boats, which in some respects are a more difficult challenge. Nauta has imposed its clean styling not only on the successful Oceanis series and Beneteau boats, but also on competitors who have somewhat stopped styling experiments that have produced more than one “odd” boat. The most visible novelty when going below deck is the lofted declination of the interior; dinette and forward cabin are one environment, from the ladder down to the bow almost losing your gaze. Those who really care can forgo intimacy by fitting the optional bulkhead that divides the rooms but deadens the feeling of space and volume. It seems to me ideal for sailing with four, with the two aft cabins dedicated to sleeping and this large area left free to be whatever one wants. The bow bed is ideal for mixed day-night use, reading and letting go of sleep when it comes. In the three-cabin version, however, you have to give up the separate shower cubicle, which in Mediterreanean I don’t think is a big loss; the large locker is. Again there is study of details, a large midship closet serves for many things, there are dedicated suitcase holders, which it becomes unnecessary to empty. Flaws? Perhaps one could have had the double sink and a more equipped refrigerator; there would be no shortage of space to have them. 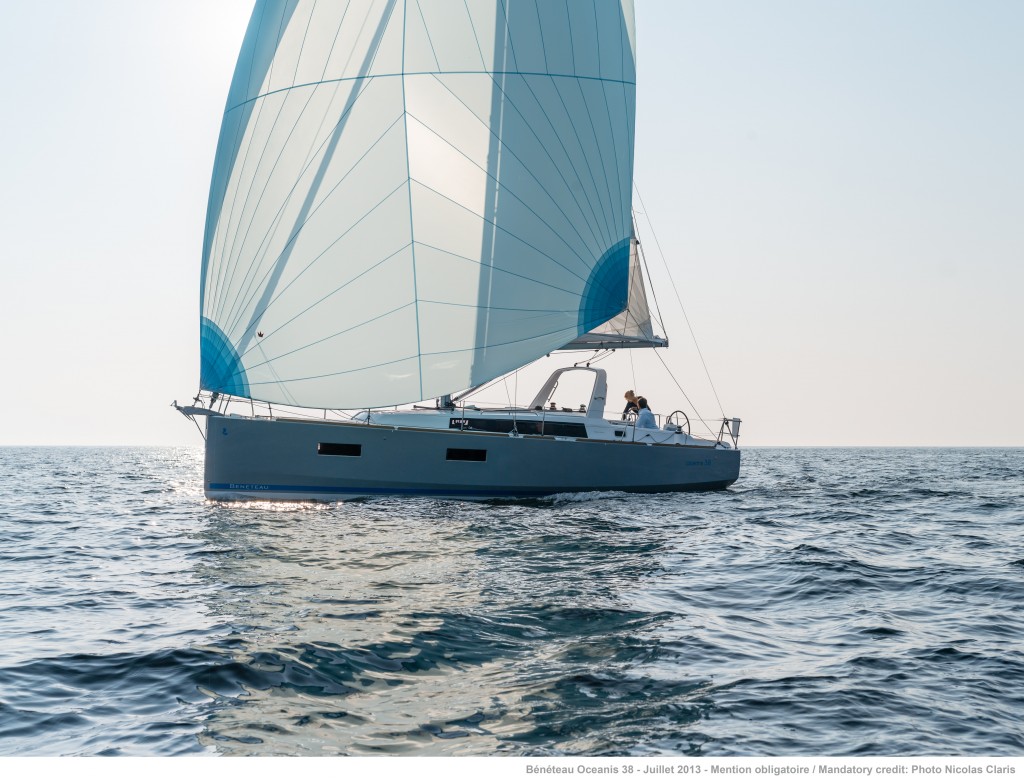 CONTROL IS TOTAL
We get lost inside the Port of Miami, among millionaire mansions, docks, other boats on the roadstead. Boating is at home here. I know what to expect from this hull, which I see well with a nice bowsprit and an asymmetrical, launched at the grand lag. Nearly all of these boats have well-designed hulls, but in their translation to industrial production, engineering departments give up a bit of mast and a bit of keel: it saves risk (in chartering) and structure (construction economy). The result is a controlled price, good overall performance with some trade-offs in low wind. But above all, the Oceanis 38 must be easy to use, and it is. It never proves “dangerous” even for a less-than-experienced skipper. One of the two rudder blades is always in the water and always ensures directionality, heeling is controlled: the wind is very unstable, when the gust comes, the boat accelerates meekly, without problems. Overhead we have a furling mainsail and a 103% jib, in a way we are at the bare minimum: I would like a version with more canines, at least a full battened mainsail and a more generous headsail, my feeling I had at first glance is confirmed: it lacks a few square meters of canvas to make it a perfect boat. In any case, as an economist would say, the fundamentals are in place, when the wind settles around 10 knots we are on 6 and a little more upwind, which immediately increases when we widen our gait a little and let the jib rest on the drapes. Adjustments and rigging positions are quite traditional, with halyards and mainsheet on deck, genoa sheets just in front of the helmsman who can reach the winch to do everything himself. Steering at the helm is easy, there is almost no oversteering, and gusts turn into speed, at least the ones we take, rather than lurching, and the helmsman’s intentions are outlined fairly soon in course changes. We sail a few hours among megayachts, offshore, sailboats of all sizes: there really is everything in Miami, with no stylistic or functional complexes, especially in the globetrotting genre. The Oceanis 38 meanwhile confirms what it wants to be: a spacious boat, suitable for an owner who wants it with a variety of uses, those that the names of the different versions propose, from daysailer to offshore sailing, and perhaps grow with her, becoming more experienced and ambitious year by year in terms of distance from the coast and her home port.