Moor the boat and go skiing–on the volcano of Stromboli! 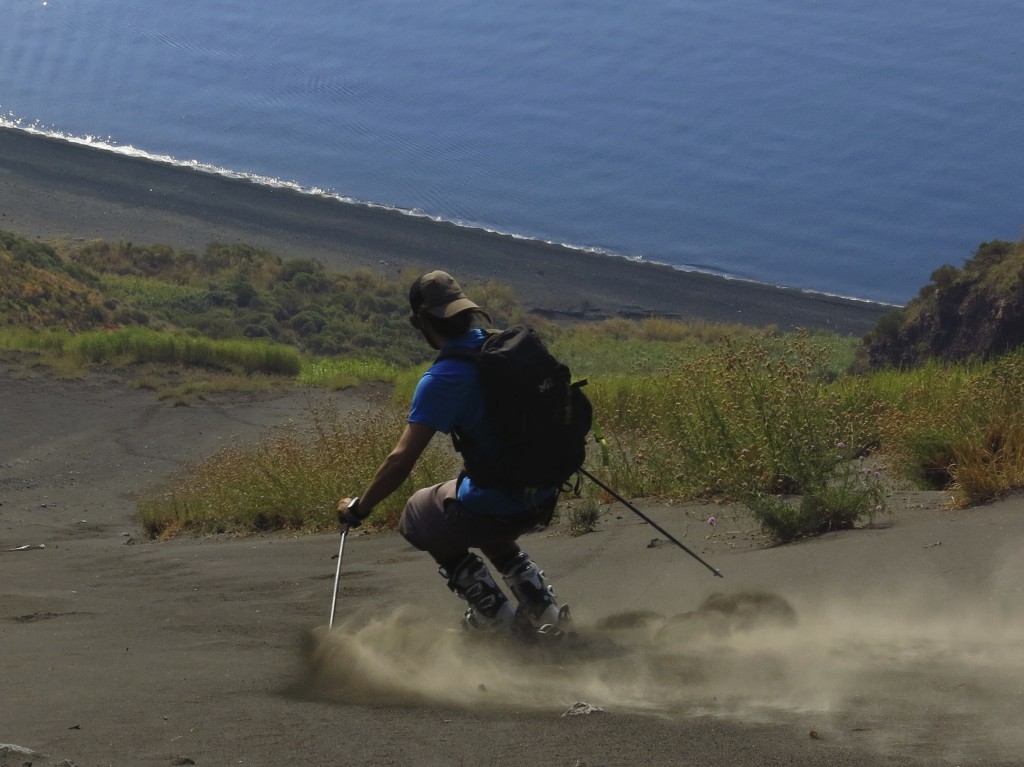 Our very own Adriano Gatta, free-rider, mountaineer, former judo national team member, photography enthusiast, first motorboat racer and then sailor became the protagonist of a new adventure (as always, well documented photographically): skiing on the volcano of Stromboli, after arriving by sailboat. Here is his account: 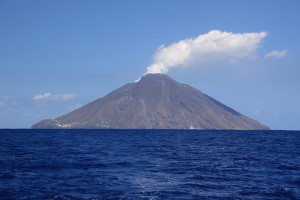 STROMBOLI: SKIING WITH THE WIND IN YOUR SAILS……
Yep, because it was with the wind in his sails (or rather at the great leeward) and with the gennaker that Bravo Papa 3 with his beautiful ski rack(you got it right, ski rack) went to the appointment he had made with the readers of the GdV last summer…. Remember ? In the fourth installment of the story ” a Brescian in Sicily” I promised myself to celebrate my 60th birthday with a ski descent from Stromboli. Don’t think I’ve gone crazy, others had done it before me several years ago by descending directly from the Sciara di fuoco, the one( for those who have been to Stromboli) on the NW side, but which, after last year’s eruption, is off-limits due to the presence of incandescent lava and the continuous fall of hot lava blocks. Beppe and I had studied it thoroughly as early as last summer and had identified a possible descent down the Sciara della tranquillità( the name gave us some confidence about the temperature of the sand), called Forgia vecchia by the locals, an, indeed, old flow on the SE slope not far from the small town of San Vincenzo. 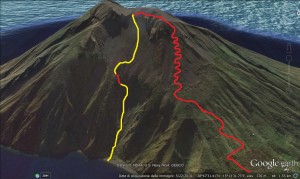 During the winter season I got busy:
found the sponsor, whom I thank: Gialdini Adventure Team, the best-stocked outdoor store in Brescia and province. He provided us with skis and boots, dressed us from head to toe( not that it took much, sponsored shorts, t-shirt and bandana), as well as the banner to put on the boat’s dredges, and arranged for the material to be shipped to the headquarters of the very efficient Magmatrek, a group of guides based in Stromboli. I contacted a very nice local volcanological guide, Marco Tomasello, a ski instructor on Etna and in France who, in the summer, organizes, in addition to ascents to the volcano, excursions throughout the Aeolian Islands. marcotomasello@hotmail.com and www.aitnemed.com if you are interested in skiing on Etna (including snow) or excursions to the Aeolian Islands and Sicily. Unbelievable: he is from Catania and there are five ski instructors in his family. 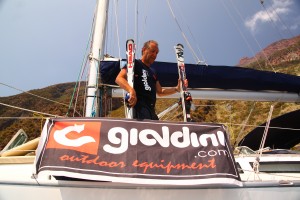 But let us come to the account of the ‘epic feat.
As always coming from Trapani(where it is at the mooring), last July, Bravo Papa 3, after the inevitable stops in Marettimo, with panoramic climb on Mount Falcone(just to train the legs a bit) and unmissable dinner at La Scaletta by Giovanni “talafia” Majorana, and in Ustica between dream dives with Mauro Maniscalco and his diving Altamarea and excursions on the island by E-bike, with a fantastic night sailing we arrive (Beppe, his wife Patti and I) in Alicudi at dawn in a blaze of dolphins that accompany us to Filicudi where we pick up Lucilla and then off to Vulcano to retrieve my wife Margherita. Just to keep our legs exercised we go up to the grand crater to admire the sunrise and fumaroles and then, via Panarea, Dattilo and Basiluzzo( I have to make it short, this is an account of a ski trip not a cruise……) we arrive at Stromboli, with the outline of “IDDU”( “IT, HIM” as the locals familiarly call the volcano) accompanying us throughout our navigation. 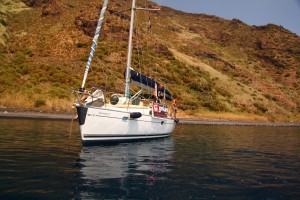 We give bottom in the Scari roadstead, in front of the village, the sea is a table. Dinner on the boat and then ashore by tender to meet Marco, the guide, in person at Magmatrek headquarters. I didn’t even know what his face looked like, we had only spoken by phone….<< sorry is Marco there ?, ah yes he is coming down with clients he will be here by 10pm……>> We lie on the little wall behind the church of St. Vincent and wait, above us a marvelous starry sky; there is no moon, the darkness is total because at Stromboli, to enhance the effect of the volcano’s explosions, there is no lighting. An endless trail of lights comes down the path from the crater; we look at them in admiration….and fall asleep…..

<< Excuse me, excuse me, were you looking for me perhaps, are you Adriano ? >> I jolt awake, a young boy(compared to me) about 35 years old with a smiling face is gently shaking me. << Marco Tomasello ? pleasure, yes I am Adriano >> Quick breafing, equipment check and appointment for tomorrow morning at 5. Stormy night, not because of the waves or the undertow but because of the muggy heat( I sleep on the deck) and the excitement. I have never skied on the sand, who knows what it will be like, and then Marco told us that the day before he had gone exploring and had to open a passage with the machéte because vegetation had invaded a gully; no one has passed through there for years. And then there is to rappel a piece with the rope….mica I brought the harness….and I certainly can’t use the banzigo…… 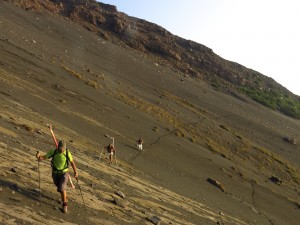 Wednesday, July 22, 2015: the fateful day
when the cell phone alarm sounds at 4:30 we are ready, the backpack with two bottles of water and a spare pair of long pants (sand is worse than sandpaper) is ready.
We quietly climb into the tender so as not to wake the women, and on time we show up for our appointment with Marco.
Also accompanying us and walking down, taking photos and films, will be Simone, a very nice and talkative 17-year-old from Belluno and soon-to-be ski instructor, Marco’s nephew.
We tie the skis to the backpack and put the boots in as well…the piste skis with plate and even skistopper( oh to straddle…..) are heavy, the heat as well; it’s dawning but the temperature is already high. Along the way we find American volcanologists looking at us bewildered. 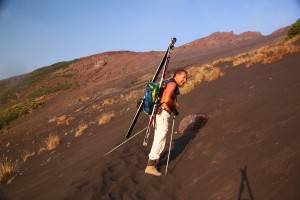 But the view is great, below us a cobalt sea, on the horizon, shrouded in mist, the sun rises behind Mount Etna…a sign…and a dream…..sooner or later down from there too…..on black lava….black powder…..and those who do off-piste know what I mean.
800 m of elevation gain, which we cover in 2 1/2 hours.
At 8 o’clock we put on the boots and hook up the skis, the backpack becomes very light.
The skier who has been in us for over 50 years is regaining the upper hand and the legs are quivering( not trembling !!!) with the desire to get down…..
The slope is not too steep, we will be around 35°.( N.B. 45° corresponds to 100% slope) at the top and a little less at the bottom, but neither Beppe nor I have ever tried the compact sand, we ask advice from Marco, the guide who recommends us to stay very backward, almost crouching on the skis and let them run…..but as I, used to the super-rippid on the snow of the Alps expected to have to make jumping turns with control of the curve and instead ….. 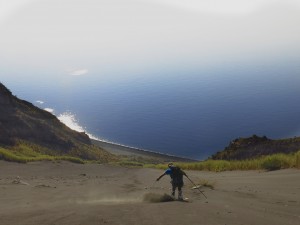 As we think about it Marco starts barrelling down straight into the blue almost 1000 mt below us….. and to think that this descent continues for another 2500 mt below the sea….. too bad we can’t do it all.
Eh no, we mountain people, Skiers for generations, can’t let a “Terù” ski instructor beat us, and an islander to boot…..

Down, tracing wide curves so as not to slow down too much and stop the skis.
At one point I pick up too much speed and close the corner too much.
Resulting in a tumble from which I rise up completely covered with black sand stuck to my body.
Miiinchia( it is just the case and the best place to say it) we had not worn the sponsor’s T-shirt. What about the bandana ? noooo in this heat, noooo!!!
We stop to tidy up as Simone descends with great leaps lifting clouds of black sand.
He goes to lurk for photos at the attack of the gully that we will have to rope over. 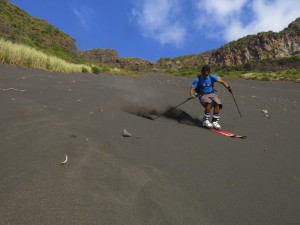 We are already halfway down we turn to admire our trails…….great disappointment,
It’s not like fresh snow; compacted sand combined with sunlight seems to have no traces, too bad !!!
we begin the more “mountaineering” or it would be better to say more tropical part of the descent.
We have to go around a cliff that does not allow us to continue, passing through a narrow, very steep gully that is completely overgrown with thick vegetation: very tall gorse, brambles etc. which in recent days Marco thinned out with a rudimentary machéte. 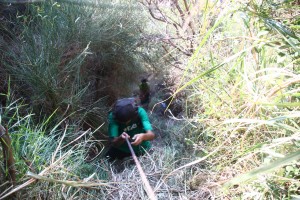 We take off our skis and poles and stick them into the tunnel, letting them fall into the void….
We rappel down holding on to a rope that Marco has placed, and after a few meters we are back on open ground.
We walk for about 10 minutes along a path among the cliff rocks and finally come out on the last part of the descent; by now the sea is close, we can smell it, but, most of all we can’t wait to dive into it.
It is almost nine o’clock and the heat is stifling but the satisfaction is indescribable.

Last curves(very wide) last photos and then, after a ski-to-foot passage through brambles and a few large boulders rolled so far, we find ourselves on the beach of Forgia vecchia, perhaps one of the most beautiful on the island, reachable on foot only after a long walk on a difficult path.

In front of us only the sea, blue, deep, still and, a few meters from the beach, our floating ski rack: the good Papa 3, which the women, by themselves, after “pulling up” the anchor( women do not “bottom or ship”….the women “put down or pull up” the anchor) brought within a few meters of the shore. 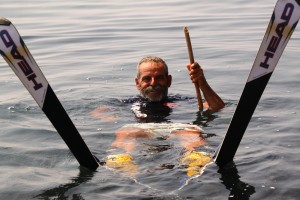 Howling we slip into the water on our skis, being careful not to drown since the bottom beats down immediately at 50 meters.
Restorative bathing in a dreamy sea: a worthy conclusion to a long-dreamed of feat. We may be a little crazy but as a Veneto saying goes, ” se i no zè màti, no li volemo” and, honestly, call it Peter Pan syndrome, madness, or whatever but, at our age, we have fun like this…..
Good wind to everyone !!!

SEE ALL PHOTOS OF THE DESCENT