Mini Transat: Zambelli 12th, “I tried checkmate but made the wrong move”

Sept. 28, 9 a.m. – The first leg of the Mini Transat, from Douarnenez to Lanzarote, goes into the archives with a hint of bitterness in the mouth. Among the Protos Michele Zambelli and Alberto Bona, who had even been in first and second place during the first days of competition, finished 12th and 14th respectively. Victory went to Frenchman Davy Beaudart aboard Flexirub, the Mini with the round bow 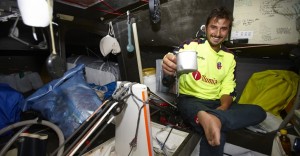 I TRIED TO CHECKMATE BUT MADE THE WRONG MOVE
Entering the Bay of Biscay, the fleet then split between those who stayed further west and those, like Zambelli, who tried their best by taking an unpopular route south, waiting for that northwesterly wind that would push the boats toward the Canary Islands. In fact, the weather forecast was clear and the wind would come after a short period of becalmed weather. So the winning strategy was to be among the first to engage him by harnessing his power. Zambelli, aboard Illumia 788, chooses to head south, taking advantage of a light wind that keeps him sailing while the rest of the conservatives to the west literally stand still. Bona on Onelinesim.it, too, chooses to head south and for two days alternates in the lead with Michele Zambelli. When the Northwest enters, however, it is only the conservatives who have the advantage first, leaving those who had attempted the Southern strategy stranded. “I tried to checkmate, but I made the wrong move,” declares Michele Zambelli with his usual smile as soon as he arrived in Lanzarote. 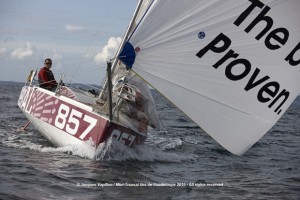 WELL FORNARO AMONG THE SERIES
On the other hand, a good result was achieved by Andrea Fornaro among the Series, who arrived in Lanzarote in 13th position after a comeback of more than 25 steps. Fornaro is proving he has the goods, and even he, after a superstart, had been the victim of a bad strategy, but then, mile after mile, he overruled opponent after opponent. On Oct. 31 we set out for the 2,700-mile leg (to Point-à-Pitre, Guadeloupe), Fornaro can have his say. Roland Ventura is arriving in these minutes in Lanzarote, in 23rd place, while Federico Cuciuc, after an enforced stop in La Coruna due to energy problems is in 42nd place, at 500 miles. We will know very shortly whether Andrea Pendibene made it to restart after attempting to re-sail the boat in record time or exceeded the 72-hour technical break beyond which the race is abandoned. In the Series, the first leg victory went to Ian Lipinski on Entreprie(s) Innovante(s).

Sept. 25, 11 a.m. – Six days have passed since the start of the Mini Transat, and the situation has stabilized somewhat after the passage through the Bay of Biscay that caused withdrawals and breakages.

PENDIBENE WAITS FOR TREE, CUCIUC DEPARTS
We start with the situation of our own Andrea Pendibene, who had dismasted on 883 Pegaso Navy. Andrea arrived in La Coruna at 1:00 this morning. Waiting for him is his “co-pilot” of many regattas, Giovanna Valsecchi: meanwhile, the Navy has sent a truck with the new mast to Spain: it is hoped that Pendibene will be able to reassemble it in time to leave for the Canary Islands and thus take part in the second part of the regatta (Gran Canaria – Rodney Bay), the 2,750-mile leg. Federico Cuciuc on Zero et T sailed from Sada after a two-day technical stop. The fleet is far away but the goal is to avoid last place since there have been so many breakdowns. Of course for now it is bad, with 45 boats among the series in the race, read Pendibene 45th and Cuciuc 44th. But the last word is not said.

THE COMEBACK OF FORNARO AND VENTURA
Hush hush, Andrea Fornaro and Roland Ventura, again speaking of the series, made a fine comeback. Andrea Fornaro is now sailing in 17th position on Sideral, less than 100 miles behind Ian Lipinski, the leader of the provisional leaderboard, who is currently on the Madera beam. Ventura, on Planiol, is 22nd.

In the Protos, also on the Madera traverse, the situation is also stable. Davy Beaudart on Flexirub leads, while Michele Zambelli on Illumia is in 13th place, one position ahead of his friend Alberto Bona, 15th on Onlinesim.it. Zambelli is 379 virtual miles away from reaching Lanzarote.

Sept. 23, 9 a.m. – The Bay of Biscay is unforgiving. The waltz of retirements has begun, and unfortunately there is no good news for our boys: Andrea Pendibene on Pegaso Marina Militare has dismasted. Andrea is safely on board (she has pushed the onboard presence button, which is used to assure the organization that she is on the boat in the face of an abnormal course indicated by the chart, a ship is traveling to her location. From the cartography, it appears that Federico Cuciuc also had some problems that we don’t know about yet, because he is heading to La Coruna. So many miners fell victim to the Gulf (even though the wind, according to weather data, did not exceed 20 knots). Giles Avril dismasted, Romain Moucel injured his right hand, Dominik Lenk and Maxime Eveillard sailed to La Coruna because of some problems, Carlos Lizancos landed in Gijon to solve some problems at the helm, and Florian Lakeman decided to drop out of the race because he is sick.

BONA AND ZAMBELLI DELAYED, VENTURA AND FORNARO IN COMEBACK
Meanwhile, the regatta proceeds. Not as we hoped. Unfortunately, Alberto Bona and Michele Zambelli, the overall leaders of the first part of the race among the Protos, slipped to 15th and 16th position as the wind increased, 129 miles behind leader Davy Beaudart. Among the Series, there is a great comeback by Roland Ventura who is now in 22nd place while Andrea Fornaro has risen to 28th. The race is still long: meanwhile, we must all try to get to the Canary Islands intact!

Sept. 21 at 6 p.m. – Continued leadership by Alberto Bona on Onlinesim.co.uk among the Protos, but now Frenchman Davy Beaudart (Flexirub 865) has pulled ahead and taken second place just 0.6 miles away, slipping Michele Zambelli on Illumia in third place. The challenge is more than open considering that the top five are concentrated in just two miles. Among the Series, Federico Cuciuc on Zero Et T is still 12th, Andrea Fornaro on Sideral 34th, Roland Ventura on Planiol is 39th while we have no news of Andrea Pendibene and his Pegaso Marina Militare, which the tracking system gives as “not located.”

Sept. 21, 9 a.m. – Among the Protos, it couldn’t be better: they say Italians in light winds are strong. It is true. Alberto Bona on Onlinesim.it took the lead, followed by Michele Zambelli on Illumia at 2.4 miles. Third, Jean Baptiste Daramy, followed at 1.1 miles from Michele. Come on guys, come on you are making us dream. In the series Federico Cuciuc rose to 12th place, Andrea Fornaro began his “remuntada” and finds himself in 34th. Andrea Pendibene is 38th while Roland Ventura is 43rd.

Sept. 20, 6 p.m. – With one day to go before the start of the Mini Transat (4,020 miles solo on the Mini 6.50 from Douarnenez, Brittany, to Point-à-Pitre, Guadeloupe, with a single stopover in Lanzarote, Canary Islands), Great news comes from the Proto category (26 miles to go): after about 100 miles of sailing, Michele Zambelli on Illumia 788 and Alberto Bona aboard Onlinesim.it 756 are in second and third place, respectively, in the overall, 1.6 and 3.3 miles behind leader Davy Beaudart (Flexirub 865). 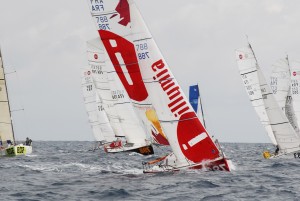 SURPRISE? NO
We said it that in this edition the blues would not go for numbers, and they would have a chance to play it out. Well, they are playing for it. Zambelli finished tenth at last year’s Transat, and this year he has made no secret of wanting to finish in the top places: the hard preparation faced by the Romagnolo class of ’90 is paying off. The third place, albeit provisional, of Bona (already fifth among the Series in 2013) fills us with pride, not least because his boat is the result of careful engineering and refit by the Italian guys at Skyronlab Design (the boat, a proto Sam Manuard, belonged to Andrea Caracci before).

MICHELE AND ALBERTO, TWO GREAT FRIENDS
Michele and Alberto are great friends, they grew up together and represent the best of the new generation of Italian ocean sailing. They also raced together in doubles (as evidenced by the photo here on the side, at the Italian Mini 6.50 GP, which they easily won). Now they are standing there in front, trying to give everything after two years of training. Take care guys, don’t get in the way and nab him, the Frenchman! 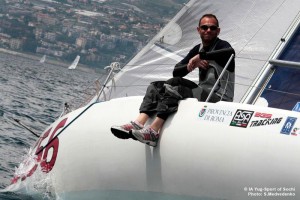 WELL CUCIUC, FORNARO OUT OF THE CHORUS
On the other hand, the situation is less rosy among the Series (45 boats at the start after the resounding forced withdrawal of the great Spanish sailor Nacho Postigo due to a collision with a rock coming out of the port of Douarnenez), where the best blue for now is Federico Cuciuc on Zero et T 556, in thirteenth place (after a fantastic start that had seen him in fourth place): only 6.3 miles however separate him from leader Julien Pulve on Novintiss 880.

He was followed by Andrea Pendibene on Pegaso Marina Militare 883 in twenty-eighth place, Roland Ventura on Fondation Planiol 523 in forty-third, and in last place Andrea Fornaro on Sideral 857: but beware, Fornaro, the creator of an excellent start, decided to keep a more northerly course than the entire fleet. The 26-mile lag against the former could be drastically reduced if the choice pays off. A radically opposite choice to that of Russian Yury Firsov on Magnum Sport 838, who is ahead of him in the overall standings and opted to jump south (as seen in the photo).