The curtain falls on the Maxi Yacht Rolex Cup awarding Alegre as world champion of the Mini Maxi class. Among the Wallys, the Magic Carpet 3 team triumphs while Firefly celebrates among the Supermaxi. Highland Fling and Lupa of London are champions of the Maxi and Mini Maxi Racing/Cruising divisions, respectively; among the J Class finally, Lionheart’s team sings victory. The twenty-fifth edition of the Maxi Yacht Rolex Cup & Mini Maxi Rolex World Championship was organized by the Yacht Club Costa Smeralda with the cooperation of the IMA (International Maxi Association) and title sponsor Rolex, from August 31 to September 6. Accompanied by 15 to 18 knots of mistral, the Maxi, Supermaxi and Mini Maxi Racing/Cruising divisions completed a roughly 30-mile course on the final day that saw them sail up the channel between the islands and then turn around La Maddalena and return to port passing off Monks Island. Mini Maxi, Wally and J Class were engaged instead in two stick races.

MINI MAXI
It has been a week of tight battles for the Mini Maxis, with the standings always short but dominated from the start by Andres Soriano’s Alegre. Today the U.S. team celebrates the world title in the class, which slipped away last year by a single point. Robertissima III, owned by Roberto Tomasini Grinover, tried hard and still deserves the silver medal, placing only half a point ahead of last year’s champion Ràn 5 owned by Niklas Zennström. Andres Soriano, helming Alegre comments on the team’s victory, “We have been working hard since last year because the competition is so strong in this fleet. A few weeks ago in Palma we didn’t do so well so it was good to come here and redeem ourselves.”

WALLY
With a final twist of the tail, Sir Lindsay Owen Jones’ Wallycento, Magic Carpet 3, settled the heated struggle in the Wally class. In fact, with a first and a third place in the two sticks played today, he managed to prevail over J One and Y3K, who had been vying for the top spot in the rankings all week.

SUPERMAXI
Big celebration for the crew of Eric Bijlsma’s 35-meter Firefly, which already had mathematical victory in the Supermaxi division in the bag yesterday. With four victories out of five races run, he left no chance for Marco Vögele’s Swiss Inoui who finished second ahead of YCCS member Vittorio Moretti’s 36-meter Viriella.

MINI MAXI RACING/CRUISING
A well-deserved victory for the crew of the 24-meter Lupa of London, which won the Mini Maxi Racing/Cruising category ahead of the Swan 60 Bronenosec and Gerard Logel’s Arobas, another pearl of Nautor’s Swan shipyard. Victory of the day for the 24-meter Italian H20 team.

J-CLASS
At the conclusion of an exciting challenge that lasted all week, the 43-meter Lionheart, with tactician Bouwe Bekking aboard, can sing victory after an excellent second place in the final heat of the J Classes. In second place in a ranking that has always remained very short is the 41-meter Ranger followed by Rainbow. Missing the podium by only one point is Velsheda, winner of today’s final regatta.

Riccardo Bonadeo, Commodore of the Yacht Club Costa Smeralda, expresses his satisfaction with the past week: “This twenty-fifth edition of the Maxi Yacht Rolex Cup was definitely one of the most spectacular. The boats and teams have changed significantly since the first edition in 1980, the technology used today is incredible, and the crews have personal trainers and dieticians with them to be fully prepared for the competition. The spirit, however, has remained unchanged over the years: camaraderie, sportsmanship and above all a healthy and fun competitiveness.” This brings to a close one of the most prestigious events on the YCCS sporting calendar while there is already great excitement for the arrival of the very large fleet of Swan boats, engaged from Monday, September 8 to Sunday, September 14 in the Rolex Swan Cup & Swan 45 World Championship.

Sept. 4 – Day two yesterday of the Maxi Yacht Rolex Cup & Mini Maxi Rolex World Championship which closed with very short rankings hinting at an exciting finale. The two stick races held by the Mini Maxi’s confirm the leadership of Alegre, which is battling with the rest of the fleet for the world title in the class. The only new addition at the top of the various divisions is J One, which trails the Wally’s lead, while Firefly (Supermaxi), Highland Fling (Maxi), Lupa of London (Mini Maxi R/C) and Rainbow (J Class) remain firm. The event, organized by the Yacht Club Costa Smeralda in cooperation with the IMA (International Maxi Association) and title sponsor Rolex, will close on Saturday, September 6. Sept. 2 – Set sail yesterday morning for the spectacular fleet of sailing ships gathered in Porto Cervo until Saturday, Sept. 6, for the 25th Maxi Yacht Rolex Cup, the event organized by the Yacht Club Costa Smeralda in cooperation with the IMA (International Maxi Association) and title sponsor Rolex. In this first day of racing, Alegre wins among the Mini Maxi’s that are competing in the world championship of the class. In the other divisions sing victory J One (Wally), Firefly (Supermaxi), Higland Fling (Maxi), Lupa of London (Mini Maxi Racing/Cruising) and Ranger (J Class). (Carlo Borlenghi / Rolex photo)

After waiting at the dock for the strong mistral to subside, the Mini Maxis and Wallys set off on a 36-mile course that took them as far as Barettinelli di Fuori and then back in the direction of Pevero. The rest of the fleet, on the other hand, shortened the course slightly by cutting after La Maddalena at Punta Marginetto and then descending toward the finish line. 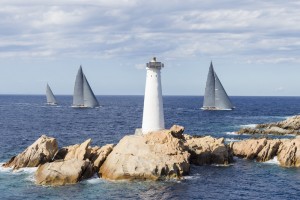 THE RACE.
After a good start by Rán 5, the 21-meter Alegre at the disengagement buoy took the lead in the Mini Maxi fleet and held it until the finish line, winning first place in real and corrected time. Second place for the American Bella Mente, entrusted to the tactics of Olympic champion Terry Hutchinson, who finished ahead of defending champion Rán 5 of Sweden’s Niklas Zennström. Following an early battle with Open Season and Y3K, the Wally race was dominated entirely by Magic Carpet 3, which crossed the finish line well ahead of the rest of the fleet. Despite this, the provisional ranking sees J One, the 24-meter vessel boasting Danish champion Jens Christensen on board, at the top, followed by Sir Lindsay Owen Jones’ Magic Carpet 3 and Claus-Peter Offen’s Y3K. The Supermaxi regatta ended in favor of the 35-meter Firefly, which, with the application of corrected time, managed to gain the top of the leaderboard. They are followed by the Swiss sloop Inoui and YCCS member Vittorio Moretti’s 36-meter Viriella. In the Maxi category good start for the 25-meter Highland Fling, which relies on the experience of America’s Cup champion Peter Holmberg for tactics. They are followed in the provisional ranking by Odin and Bristolian, respectively. Jeremy Pilkington’s 24-meter Lupa of London also gets off on the right foot, grabbing first place in the provisional Mini Maxi Racing/Cruising standings. In second place is Arobas by Frenchman Gérard Logel followed by 18-meter Wallyño. I J-CLASS
In the J Class division, the 41-meter Ranger and the 40-meter Rainbow went head-to-head with the latter crossing the finish line first by a handful of seconds. The application of corrected time, however, rewards Ranger, who closes the provisional ranking in first position ahead of Rainbow and Velsheda.

Aug. 31 – On the eve of the Maxi Yacht Rolex Cup (the first races are being held today instead) in Porto Cervo (organized by the YC Costa Smeralda), the ladies of the sea have already shown off in this beautiful video.

MAXI YACHT ROLEX CUP – ON THE EVE OF THE REGATTAS


MINI MAXI
For the fifth consecutive year, the event will host the Mini Maxi Class World Championship, which has eight entrants including three-time world champion and current title holder Niklas Zennström aboard the brand new Rán 5. Also competing in this exciting battle are Hap Fauth’s American Bellamente, winner in the 2012 edition, and Robertissima III (formerly Rán 4), by YCCS member Roberto Tomasini Grinover, among others.

THE OTHER “BIGGIES”
The rest of the fleet is divided into five categories based on size and technical characteristics. In the Wally division, last year’s winner, Jean-Charles Decaux’s J One, will have to contend with the crew of Sir Lindsay Owen Jones aboard the 30-meter Magic Carpet 3, while among the Maxis, another regular of Costa Smeralda regattas, Highland Fling of YCCS member Sir Irvine Laidlaw, stands out. The 35-meter Firefly, in the Supermaxi division, will try to impose itself again here in Porto Cervo after June’s victory in the Loro Piana Superyacht Regatta; in the Mini Maxi Racing/Cruising category, the Russian Swan 60 Bronenosec will be up against the crew of Arobas, another example from the Nautor’s Swan shipyard.

I J-CLASS
A focus on the beautiful J-Class, large racing yachts, symbols of luxury and sportiness, designed and built in the 1930s to participate in the America’s Cup of those years. Two original boats of the era stand out in the fleet: the 39-meter Velsheda of 1933, winner of the class in the past edition, and the 36-meter Shamrock V of 1930, both pearls of the Camper & Nicholson shipyard. Alongside these historic examples are the modern Ranger, Rainbow and Lionheart, built on the line of the originals.

WHO’S HERE.
As every year, this regatta attracts world-class sailors who increase the prestige of the event. 2007 America’s Cup winner Peter Holmberg appears as tactician on Highland Fling, aboard Open Season is Canadian Olympic silver medalist Ross MacDonald, while America’s Cup veteran Francesco De Angelis is tactician on Rainbow. Terry Hutchinson, America’s Cup sailor, is tactician on Bellamente, the award-winning Vasco Vascotto is at the tactician of Robertissima III, while Jethou relies on the tactical expertise of Brad Butterworth.