Martinoni and Di Majo: “We Italians at Whitbread.”

They arrive at the editorial office and start sifting through old issues of the Sailing Newspaper, “Look at this how young I was!” or “I didn’t remember being the wizard of pasta with bechamel sauce in the kitchen!” Paolo Martinoni and Corrado Di Majo came to tell me what it was like to take part in a round-the-world sailing trip, when it was still a great adventure of sailors before racers, just days before the start of the 2014-15 Volvo Ocean Race. Together they participated aboard B&B Italia (the former Valentina VI of the Milanese notary Masini) in the second edition of the Whitbread Round The World Yacht Race in 1977/78: Di Majo then boarded Giorgio Falck’s Gatorade in the 1989/90 edition for one leg, and so did Martinoni on the Rolly Go (also by Falck) in 1981/82.

ALL BECAUSE OF A GIRL
“I decided I would participate in the second Whitbread” – Martinoni recounts – “after witnessing the start of the first one in 1973. You don’t write this, but know that at the time I was interested in a fellow student: I was studying at the London School of Economics and learned that she was embarked on Doi Malingri’s CS&RB. Before I went to see her, I passed by Gosport, where Falck’s Guia was parked at the famous Camper & Nicholson shipyard, for tuning up for the round-the-world voyage: I asked Jepson (aka Giovanni Verbini: 12 times he crossed the Equator, three times he made the round-the-world voyage, even surviving a shipwreck) if I could come up and see the boat. I glanced at the interior, and once I got back on deck I realized that we had cast off our moorings in the direction of Portsmouth, where the regatta was starting: and to think I had left my shoes on the dock! I never thought I would get to Portsmouth like that. There I met my friend: I remember the extraordinary atmosphere of the pre-departure: there were so many great sailors, primarily Tabarly. And there was that sense of defiance of the unknown, that ‘who knows if these guys will come back.’ I decided on the spur of the moment that I would do anything to participate in the next edition.”

THE ENFANT PRODIGE OF THE OCEANS
Corrado Di Majo, on the other hand, is a “child prodigy” of ocean sailing: in 1976 at only 22 years old, he participated in the Ostar on the family Swan 37, making him the youngest skipper. The following year he convinced the owner of the Valentina VI to make the boat available for the Whitbread, in exchange for a commitment to find a sponsor: “And we found one: Ambrogio Busnelli’s B&B Italia. I remember we sailed from Arenzano in July ’77, (where Busnelli had a house and was keen to have the inaugural party) to Portsmouth, stopping just in Lisbon to fix the aluminum mast, which was not fitting and which we replaced permanently in England.” Di Majo turned 24, and again he is the youngest skipper among the “madmen” about to embark on his second round-the-world voyage: more than 27,000 miles with stops in Cape Town, Sydney, Rio de Janeiro and back in Portsmouth.

“WE WILL BE CAREFUL”
The first edition of Whitbread had ended with the death toll of three: “We knew that, but it’s not like we cared that much,” Di Majo says, “because we were young. The mountains are known to claim victims every year, but people still go there. This was our attitude: is this a dangerous adventure? We will be careful“. And the strict regulations did not make things any easier: “For navigation,” Martinoni explains, “only sextant and clock could be used, the only radio system for distress calls then was the Loran-C but at Whitbread it was forbidden, although it was necessary to have a radio operator on board to communicate in case of need.” There wasn’t even radar, so you couldn’t go too far south (despite the fact that the orthodromic route went all the way to the 66th parallel) if you didn’t want to end up trapped in the ice. Crews had no upper or lower limits on numbers, from one stage to the next you could change who you wanted. Of course, no one was paid: “We were sailors, during stopovers we slept on the boat, not like today!” recalls Corrado. 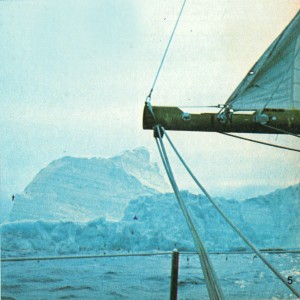 THE MOST BEAUTIFUL EXPERIENCE
Although both Martinoni and Di Majo have participated in other Whitbreads (and numerous ocean races), the ’77/78 one represents the best memory for both of them. “Especially the second leg, from Cape Town to Sydney”-speaking is Martinoni-“when we ran into an iceberg. An incredible experience. A shimmering dot that as it gets closer and closer turns into a white mountain. We were at 62-63° latitude, so perhaps it was not necessary to go that far south into the Indian Ocean. Perhaps we had done so in the hope of seeing an iceberg.” “Paolo, what about the aurora australis?” echoes Di Majo: “An indescribable spectacle: a sudden flare that lasts for seconds, but seems like an eternity. And you feel tiny little.” And while you’re enraptured by nature, you forget you’re in a regatta. “The competition was there,” says Martinoni, “but coming first, second, third or last didn’t matter so much. There was the awareness that you were taking part in something unique. Not like today, that if you don’t win you are nobody.”

When there was an opportunity to engage in battle, we still did not back down: “I remember we were almost in Sydney, in last position because we had had a problem with the spreaders”-Di Majo explains-“when we saw ahead of us Debenham, who was in second-to-last position. After thousands of miles we found ourselves dueling in Sydney Bay, and we managed to cross the finish line first, with their skipper lifting his hat in admiration. Other times, definitely other times.” Times when there were no unapproachable sailing “stars”-you could easily sit down for a beer with Peter Blake. Another pleasant memory, which betrays the “butterfly” nature of the sailors of that time, Corrado brings up: “We were all very young, we arrived in Rio de Janeiro after 40 days of sailing, in the middle of carnival. Need I say more?” Paul goes down to Rio to prepare for the Route du Rhum, Corrado continues the ride finishing in ninth position overall.

“AFTER CAPE HORN ALL DOWNHILL”
What about Cape Horn? “We were lucky enough to pass it in good weather conditions,” – Martinoni says – “it brings you back down to earth: after days and days in the Pacific nowhere, you have eye contact with dry land.” “We got in radio communication with Ambrogio Fogar,” Di Majo recalls, “through an amateur radio shack we had on board: he was descending south in an attempt to circumnavigate Antarctica on his Surprise, together with Mauro Mancini. He told us, ‘Guys relax, after Cape Horn it’s all downhill.’ Unfortunately, the shipwreck that cost Mancini his life occurred a few days later.”

SAVED BY THE MIRACLE OF SAINT SILVERIO
In 1981/82 Martinoni, who by then had become an experienced ocean navigator, took part in the third Whitbread, only on the leg from Auckland to Mar del Plata, Argentina, aboard Falck’s Rolly Go: “I wanted to do Cape Horn again,” he explains. And he will succeed, but after risking his life and being saved by a miracle: “We were at latitude 52° south, at night, under spi. The sea was rough. In those days a small genoa was kept even when there was a spinnaker; it was said to stabilize the boat. As I was tying the spi bag to the stanchion, the genoa suddenly changed tack and knocked me out of the boat. When I saw the sign ‘Yacht Club Costa Smeralda’ on the stern of the boat moving away, I realized what had happened. With the water at seven degrees, you are dead after a few minutes. And until then, no one who had fallen in the South Pacific had ever been fished out alive. I took off my boots and played dead, because the less you move, the less heat you disperse, while waiting for them to come for me. And in the meantime, I was thinking. I was seized with unspeakable sorrow, with the knowledge that shortly thereafter, if they did not come to my rescue, I would pass from life to death. Fortunately, Pierre Sicouri took the helm, and in seven minutes they managed to pull me up, after passing over me, spotting me once upwind, and allowing themselves to be drifted to get closer to me. They hoisted me aboard, stripped me naked, offered me a cigarette and tea, and made me skip the next watch. After that I was ready to go again. Jepson, unfailingly on board, confided in me that during the salvage operations he had been locked in his bunk praying to St. Silverio, the patron saint of Ponza, his home island, to save me. I promised Jepson that I would go the following year to honor St. Silver on his feast day at Ponza, but because I went there under sail and caught becalms, I arrived at the island the next day.”

THERE IS A NEED FOR ADVENTURE
Instead, Corrado Di Majo participated in the 1989/90 Whitbread, in the Punta del Este to Perth leg: “Many things had changed since ’77: competition had become prevalent. Over the years the phenomenon would be amplified, first with the advent of the Wor 60s in 1993 (I was project manager for Brooksfield, for which Paul handled communications), then with the Volvo Open 70s. I don’t know if this is the right direction: it’s no coincidence that there are fewer and fewer boats. It used to be just a great adventure: and as such it attracted media interest. Sailing, from a technical point of view, is difficult to tell to a ‘lay’ audience. It is not like soccer, or tennis. When the focus shifts to the competitive side, interest inevitably wanes. I don’t feel like criticizing the Volvo Ocean Race format: those are other times. I hope some enterprising young people will find a way to revive the round-the-world race. And to bring it back to its dimension as a great adventure.”