Loft effect: how boats change inside 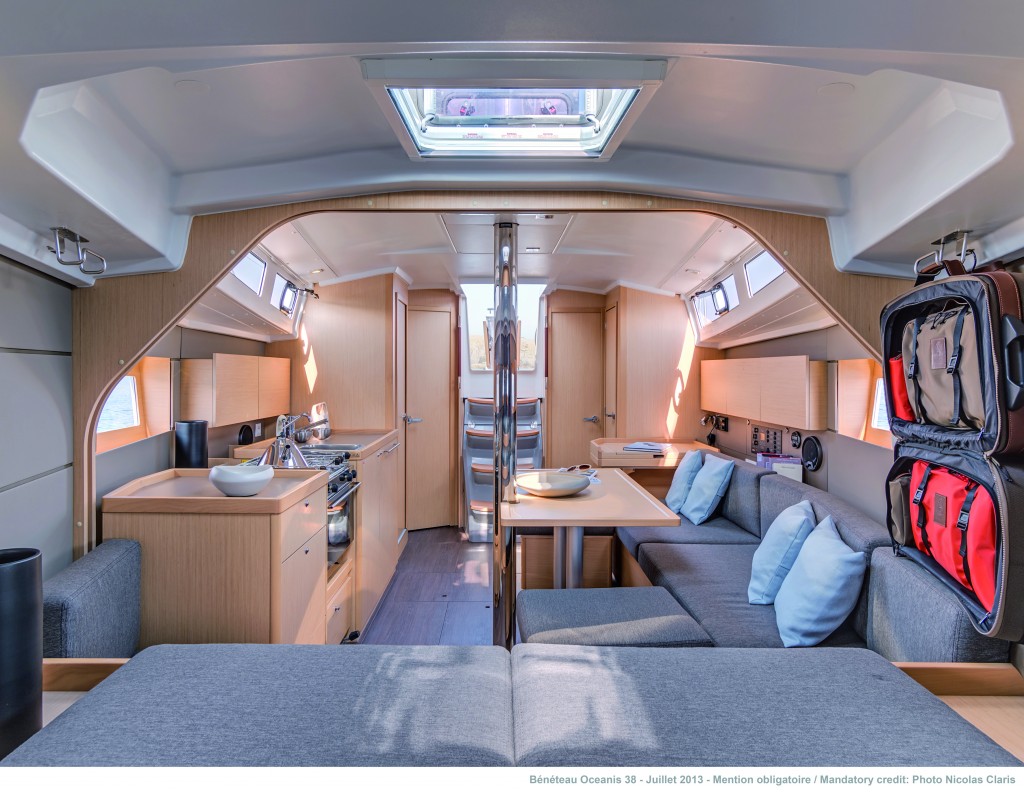 Boat interiors in recent years have undergone a conceptual revolution in their design. Similarly to what has happened in apartments in large metropolises, the trend is increasingly to organize spaces in such a way that light and the absence of “obstacles” dominate. What we like to call the loft effect. No longer are apartments with rooms running down the sides of a single corridor, but large open spaces in the city; just as we no longer find ourselves at sea in a maze of cabins and corners, but large dinettes with the possibility of creating a single space with the forward owner’s cabins and an in-depth study of light points to “enlarge” the space. One of the symbols of this revolution is the latest generation of the Oceanis range, designed by Mario Pedol and Massimo Gino’s Nauta Yachts Studio, and especially its progenitor: theOceanis 38 (large photo above), which encapsulates the principles of this change of course. We asked Massimo Gino himself to introduce us to the guidelines of this new philosophy. “The challenge was to make even the below-deck spaces of a 35- or 38-footer spacious. Completely open space interiors, without the forward bulkhead like those found aboard the Oceanis 35 and 38 have several functions and meanings: first of all, that of “enlarging” the spaces thanks also to a careful study of the light points, for example the size of the hull windows is very generous and the woods chosen are light. The interior becomes a single space (despite separate aft cabins) that is totally open but can grow over time along with the owner’s experience. What is new is not only the absence of the forward bulkhead, for example, the galley is made up of modules that allow you to decide which ones to place on board and which ones to buy at a later date. This philosophy is not only functional from the point of view of usability of space, but it also favors the choice of buying a boat by making the initial economic investment less demanding and at the same time more customizable environment for the owner.”

OTHER BOATS WITH LOFT EFFECT 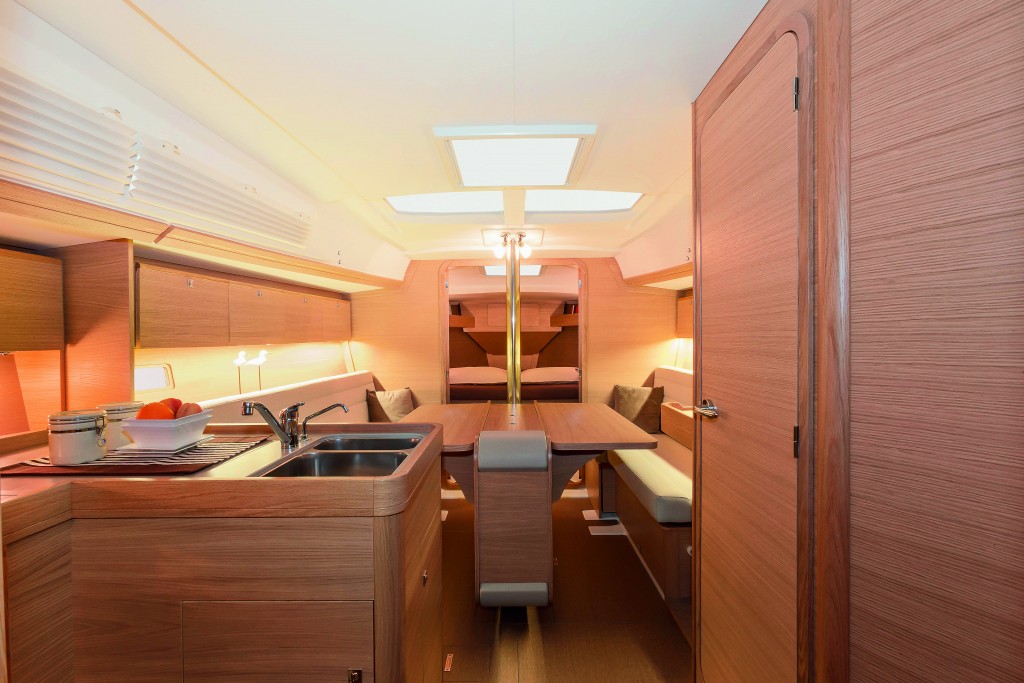 The forward cabin of the Dufour 350 Grand Large has a door formed by a double door that opens inward: you can open one door or both. This solution, designed by Umberto Felci, allows for an open space effect when both doors are open, amplifying the perception of space towards the bow. The interior is also very bright thanks to numerous portholes and pass-throughs. The choice of light-colored woods also plays a key role: moreover, they are painted with a technique that leaves them looking absolutely natural. This type of finish makes the room look more refined and elegant and goes well with the joinery system that wants extensive use of solid wood.
Interior layouts. The Dufour 35o GL is available in two different versions, with two or three cabins, always with one bathroom. 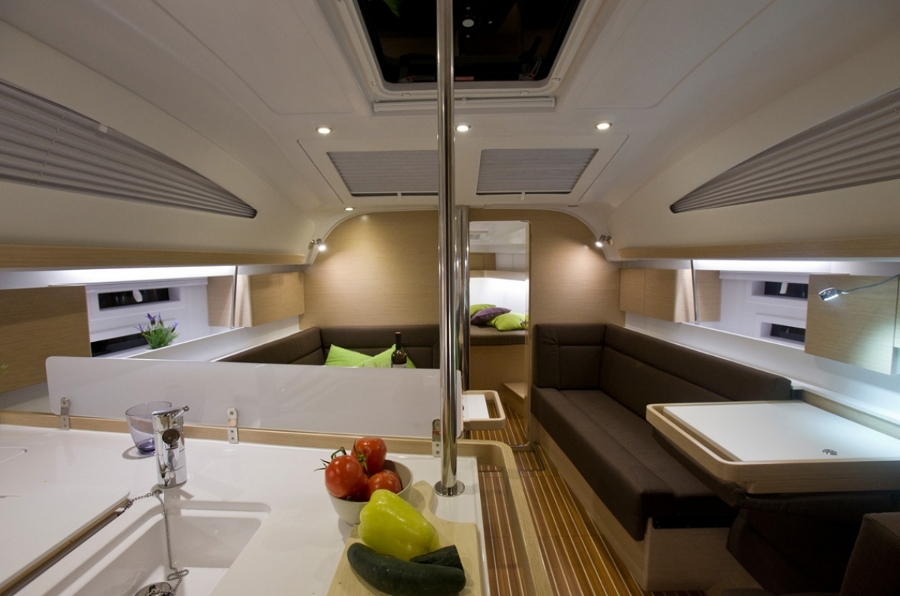 IMPRESSION 40
The Slovenian shipyard Elan chose a Deck Saloon solution to amplify the feeling of space below deck. The interior is spread over three levels (kitchen, saloon, and cabins) and is striking in the amount of light and height Rob Humphreys was able to achieve. Going to count the windows we note two large side windows on the left deckhouse and one on the right, two small hull windows (sofa seat height), three square windows on the deckhouse a (of which one can be opened and two cannot); as for the cabins, there are three light points in the aft cabins (two of which can be opened, for good air exchange).
Interior layouts. Two to three cabins one to two bathrooms. 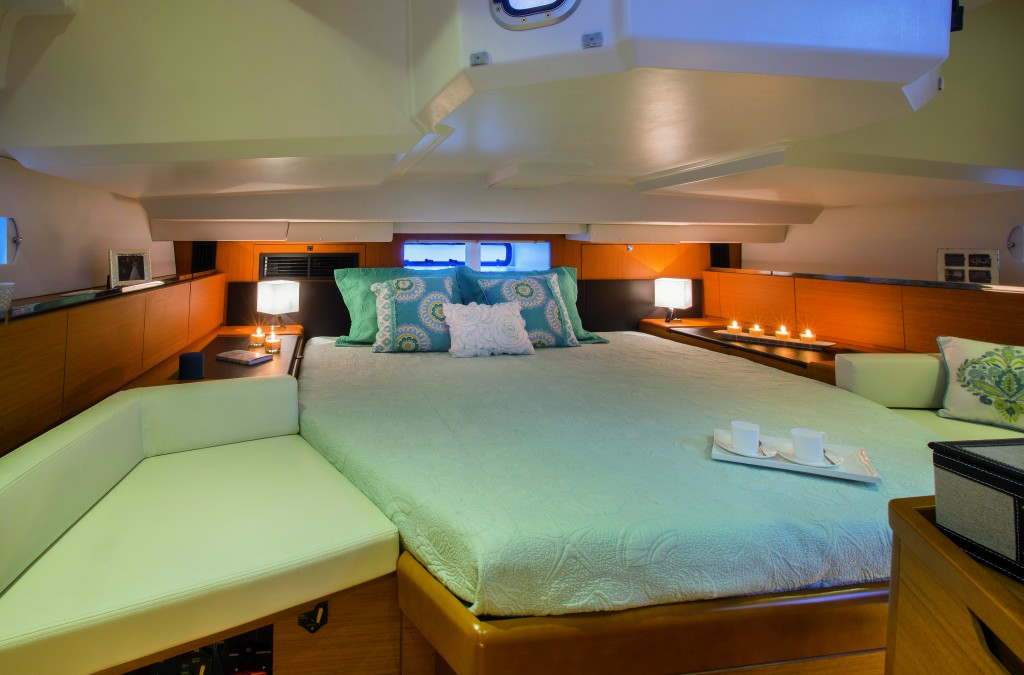 SUN ODYSSEY 44 DS
The French shipyard Jeanneau also plays with space on board by choosing a Deck Saloon solution and proposing an aft owner’s cabin in full loft style with passageway to exit directly into the cockpit. This positioning allowed Franck Darnet to create a cabin with an especially large comfortable floor surface. The various portholes, both opening and non-opening, that are scattered around the cabin help to give it great brightness. The choice of placing the bed at the broadside with two settees on either side is also definitely apt and succeeds in giving the cabin a true suite look. The deck saloon structure allows for a seated sea view.
Interior layouts. Two to three cabins. 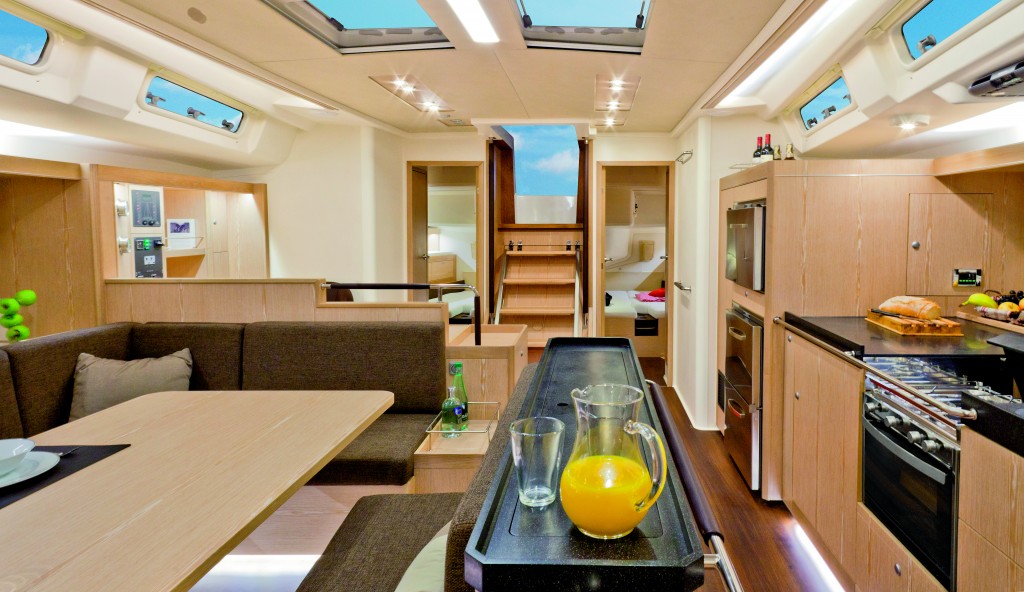 HANSE 575
Light-colored woods, bright interior thanks to light spots and really generous interior lighting. The German shipyard has also veered toward an interior layout in line with the latest trends that are inspired by modern metropolitan lofts. An abundantly wide lower deck and windows from the cockpit down to the deckhouse reduce the difference between the interior and exterior of the boat. Access below deck features a large salon and master stateroom with island bed and again a large ceiling window that allows light to enter to amplify the spaces and to have the sky as a backdrop.
Interior layouts. Available from three cabins with three bathrooms to five cabins plus sailor cabin, and almost endless customizations. 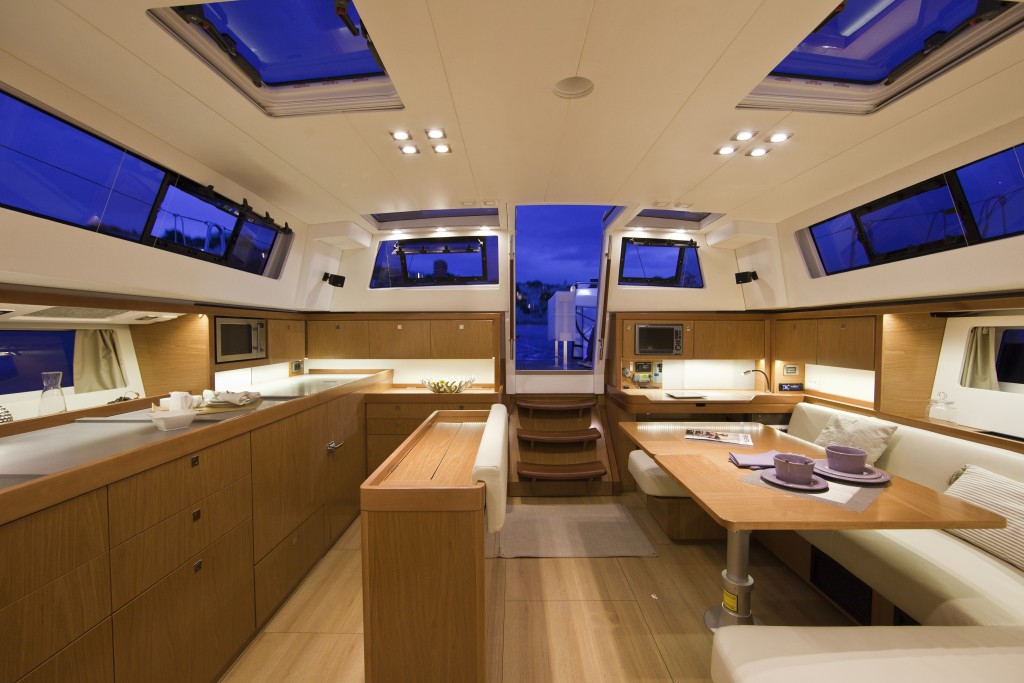 SENSE 50
From inside the dinette of the Beneteau shipyard’s Sense 5o, it is really possible to see everything going on around, thanks to the deck saloon structure that eliminates that enclosed feeling you get when you are inside classic boats. This loft effect is made possible by the windows positioned on the deckhouse to create a wraparound environment that allows for a truly 360-degree experience of the sea. Internally, the boat is divided into two very distinct quarters: aft, at the entrance, dinette and galley; forward, the sleeping quarters, with the cabins and, in the case of the two-cabin version, the owner’s study.
Interior layouts. Two to three cabins and two bathrooms 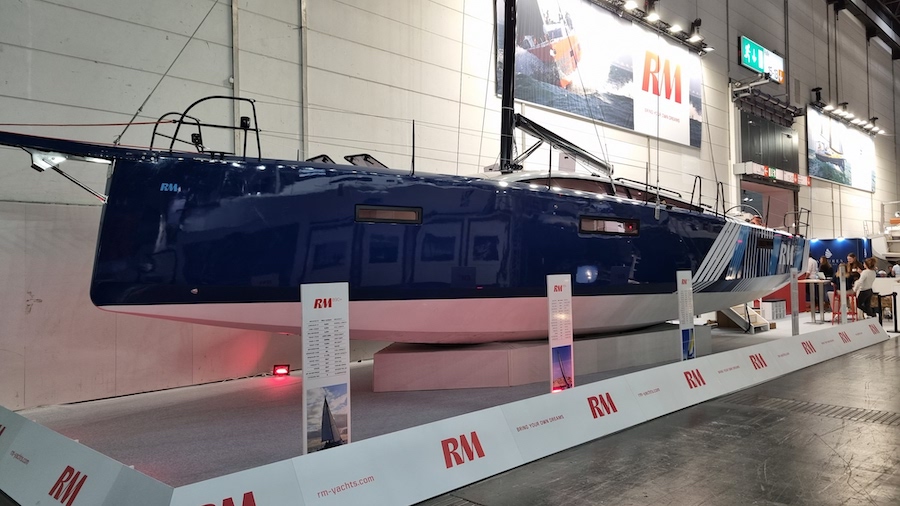 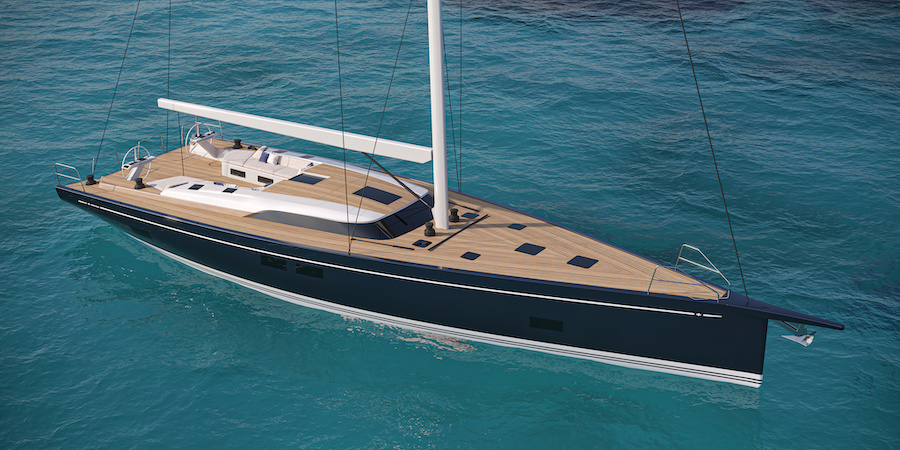