LETTER The beauty of coincidences between sailors!

Antonella and Stefano decided to set off, aboard their Bavaria 42 Vision, for a sabbatical trip along the Mediterranean coast. One of their last stops was in Trapani. There they read the September issue of the GdV and… find out what happened from Antonella’s own words!

Good morning, my name is Antonella, I am 52 years old and three quarters, I lived in Bologna and until four years ago I had never been on a sailboat. On July 10 this year, I sold my house, car, left my job, the city, the mainland and left with my husband and Cautha ( a Bavaria 42 Vision) from Marina di Ravenna to Sicily. After 44 days, 22 sailings, 878 miles and a blog that allowed me to overcome a certain physiological abandonment syndrome: cautha16.wordpress.com (from which the photos you see on this page are taken) I arrived in Trapani and… at this point, I am copying, verbatim, my last post, which concerns you closely, as you will understand. I will add just one consideration: this whole wonderful adventure has been punctuated by extraordinary events, children of synchronicity, reminding us that no matter how strange or original we may feel, we are all, it really has to be said, in the same…boat…! 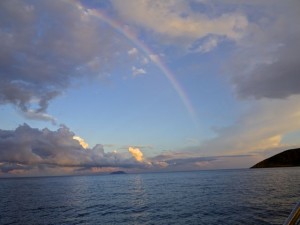 To believe in the signs of fate, one has to think that I am about to witness a momentous change, a counter-exodus from north to south, an abandonment of the mainland, a future “Waterworld.” More simply, I am beginning to think that coincidences are a constant on this journey. But let’s go in order. Latest issue of “Sailing,” in digital. Stephen reads. First comment with that pride that distinguishes those who feel they are pioneering a shared choice:
– Hey, there’s another exodus here who has decided on the boat….
And shortly thereafter:
– They are from Brescia, Italy, husband and wife….
With some notes of astonishment now:
– Come on, they were thinking about Cervia, but they decided on Trapani….
And it all ends, for the moment, with some of my oh and ah and ben,what a case!
But fate awaits.
Shortly after, returning from a bicycle ride, sitting in the cockpit, we see a boat arrive at the berth. I don’t recognize a Comet from an Oyster and don’t flinch, but the gentle consort sharpens his gaze, then laughs in disbelief.
Two minutes later we are calling complete strangers by name:
– Hello, you won’t believe it, but we know you, we will be neighbors “at home”!!!

If you missed it this summer, find out in this story who Antonella and Stefano met in Trapani!
Part 1
Part 2

PrevPreviousGarbage in the sea, have you seen it too? Report it to us!
NextJinx Le Cleac’h! When cinema anticipates realityNext
In evidenza