INTERVIEW How boats have changed – Part 1

What better time than the Genoa Boat Show to analyze how boats and the way they are designed have changed over the past 30 years? We do so with Vittorio Mariani, one of Italy’s leading experts in project management. Our talk was very long, so we divide it into two parts. Today, here is the first one, in which we go over the role of the designer and look at how construction techniques have evolved.

If your name is Vittorio Mariani and in your career you have worked on designing and building hundreds of boats, from the legendary Azzurra hulls to fast cruisers like Roma, you are the right person to talk to to really understand how the yachting world has changed and where it is going.

We start talking, and immediately Vittorio displaces me: “There is no absolute good. Instead, there are the different desires of owners and the different uses that people want to make of a boat. Boats are never perfect for everyone, but must be designed to suit different markets“.

THE INFORMATION TECHNOLOGY REVOLUTION AND THE POWER OF TEAMWORK
“Until the 1920s-30s, it was the shipyard itself that designed its own boats in-house. Then the figure of the naval architect was born, with the legendary Sparkman&Stephens firm as its symbol. A figure that remained almost unchanged until 30 years ago, when the concept of specialization began to amplify. The naval architect remains primary, but his or her figure is different now; today design is linked to a real team. A transformation largely due to the development of cad software“. To clarify what we are talking about, these are those computer programs, which allow you to design and create 3D models. In fact, that of the last few years has been an incredible development, also due to the possibility of making these programs “run” on a portable laptop, whereas until the early 1980s you needed huge and very heavy computers. “That is why structural calculations used to be a prerogative of shipyards that made commercial ships, but today every builder is able to do them.” Undoubtedly, having an entire team working on a project results in enrichment of the project, not least because specialization allows for greater depth in each aspect and improved technical quality. “Logically, this is a much more complex job, partly because the demands of shipowners have also become more complex. For the past several years, there have also been many architects and designers from outside the nautical world who have brought many new ideas, both in terms of space utilization and materials. The important thing is that because they do not have a seafaring culture, they are guided, otherwise damage can be done….”

CONSTRUCTION HAS EVOLVED
If you think that such rapid development in design has gone hand in hand with the evolution of building materials, you are way off the mark. “The big evolution of composite and the biggest effort from the research point of view was twenty, twenty-five years ago. Since then, there has actually been a slow but steady fine-tuning, and what has been optimized is mainly the construction method: one example is the infusion technique, which has evolved greatly because it links a technical improvement of the laminate with a reduction in cost compared to vacuum with prepreg materials. And so it also came to mass production“. 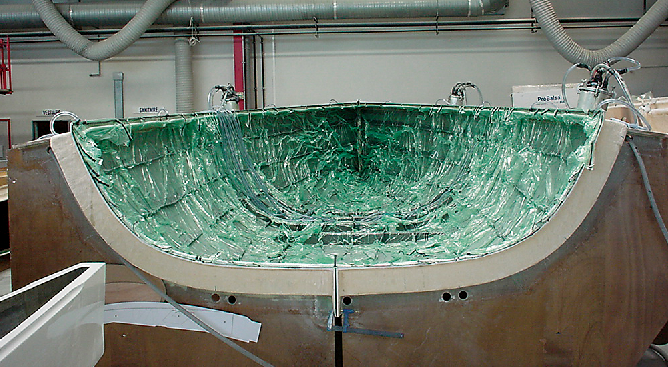 The evolution of construction (and the ever-present presence of software) has had an impressive impact on another key feature of yachting, the evolution of hull design. “True, it’s a process that we saw obviously first in the racing world and then slowly transferred to cruising boats.” A bit like what happens on automobiles, Formula 1 tests the most futuristic solutions and some of these are then brought to our cars. the importance of lightness “We absolutely must dispel a false myth: lightness does not mean little marinity. There are heavy, unseaworthy boats that are less safe than much higher performance hulls, even in the cruising world. The forerunners in this area were the New Zealanders. Then, in recent years, we have had a great evolution of hull design in the world of ocean racing. Think of loners, who, in order to have greater stability and make the most of load-bearing gaits, have hulls with significantly increased volumes at the stern. The last development is undoubtedly the edge“. Ouch, here we go. I understand its importance in the ocean, on high-performance boats, but are we sure that in the cruising world it is not more of a fad? “Surely it is a fashion, but with great positive implications, not so much in performance, but because it allowed the designers to increase the volumes on board, both those inside and in the cockpit, due to the smaller stern escape volume. Speaking of the hull and submerged volumes, there is one aspect of research that has unfortunately stalled a bit: that of the movable keels. Certainly holding them back is a cost argument, but also a certain fear that no longer makes sense. They are ultra-safe and allow for a lighter keel and, when needed, greatly decrease draft. All without affecting the righting moment“. It is a striking speech, especially when we consider that a giant such as Beneteau has just unveiled a version of its new Oceanis 35 equipped precisely with a mobile drift.

WHO VITTORIO MARIANI IS

In 1976 Vittorio Mariani was one of the co-founders and partners of the firm Vallicelli & C. Yacht Design. Boats of all kinds, from large cruising hulls to fast racing yachts, have been designed in the Rome office. Among them, impossible not to mention the three hulls of “Azzurra” for the America’s Cup challenges in 1983 and 1987. In the 24 years during which Mariani has been with the firm, he has participated in the realization of more than 200 projects. As the industry evolved and real teams of specialists began to collaborate with the designer, the work became much more complex. Therefore, in 2000 Mariani decided to focus on “project management,” controlling the construction phase and coordinating the design team. Among the major projects he has worked on in recent years are Roma (an 85-foot fast cruiser from 2005), Polytropon II (2008, is an 82-foot fast cruiser) and the Oyster 72 (2013 designed by Rob Humphreys).

FIND ONLINE THE SECOND PART OF OUR INTERVIEW WITH VITTORIO MARIANI ON FRIDAY, OCTOBER 3