INTERVIEW Andrea Mura, our Sailor of the Year, prepares for Route du Rhum 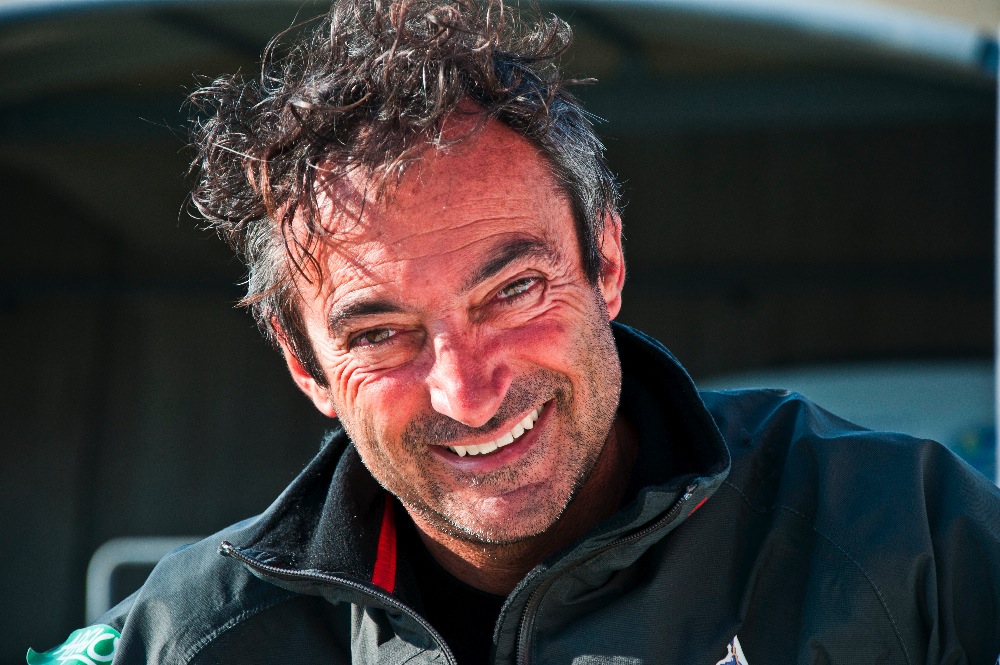 Vento di Sardegna prepares for Route du Rhum. Andrea Mura’s boat is dry-docked in Cagliari harbor for maintenance and restyling work: applying antifouling to the hull was a particularly complex operation, because a shed had to be built by placing 25 containers around the Open 50 to protect it from the wind during painting. Three cranes were needed for hauling. Vento di Sardegna will have more for 4-5 weeks: now the centering and lightening work will begin, to make the boat, already stretched to the bone, perform even better. And who knows, Mura may not be able to repeat his 2010 success at Route du Rhum. By the way, we take the opportunity to publish the lengthy interview we conducted with the Sardinian skipper at the TAG Heuer VELAFestival, after presenting him with the 2014 Sailor of the Year award. 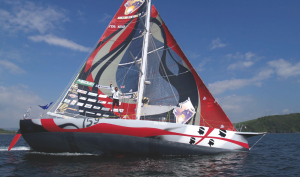 Sardinians are said to be hard-headed. And it is thanks to tenacity that Andrea Mura was able to fulfill his dream as an ocean sailor capable of wetting the noses of the French and British in the most challenging transatlantic races. His line honors win at OSTAR 2013, which earned him the 2014 Sailor of the Year award, is just the latest addition to an Olympian sailing palmares. Born in Cagliari, Italy, on September 13, 1964, he has a long and prestigious sporting history: eight years on the FIV National Team, three Olympic campaigns, and one America’s Cup campaign as a mainsail trimmer on the Moro di Venezia. In 2007, he put the Open 50 Vento di Sardegna on the water, beginning his oceanic journey. In Mura’s sights, among others, ended up the Route de Rhum, won in 2010, the Twostar and the Québec-Saint Malo in 2012, in addition to the aforementioned OSTAR.

THE NUMBER ONE ENEMY FOR A SAILOR? IS NOT THE GALE, BUT THE GOD OF MONEY
Don’t expect Moitessier-style romantic sailor tales if you ask Andrea Mura about the most difficult moment in her sporting history. He will answer you like this, “The never-ending search for the budget.. Over the years I have experienced dramatic moments where I have seen my economic security die. I was running out of legs, in total failure. Passion leads you to make choices that reason discourages, choices that I risked paying very dearly for. Once I started the Vento di Sardegna project, I had sponsorships in the pipeline so I covered the cost of buying the boat out of my own pocket, with the assurance that the money would come back, but there were those who did not live up to their commitments. I ended up with eight months of economic autonomy, then I would lose everything I had. I would have gone back to live at my parents’ house, like a 15-year-old, I couldn’t even afford a bicycle“. But then, with great sacrifice, he recovered. “I say this to you who decide to take my path: believe in it, always believe in it. Spend every last penny to chase the dream. The big feat for me, every time, is to be able to get to the starting line, to put together people, a project, a team, where human relationships are the basis of everything. I don’t do ocean sailing because the doctor ordered me to, but because I believe in it. It might seem bad to dwell on economic issues, but this is the reality of the facts in Italy. A problem that all my colleagues have, but I may have gone a little further.”

THE SEA AND I SPEAK THE SAME LANGUAGE

Yes, okay, but sailing? “Navigating is a game, my language. The sea is my life. When I’m there alone, in the ocean, I can deal with squalls and breakdowns, I have no problems. My only fear is losing the regatta, should the mast fall on my head, or should I bump into a container. I am a pure racer, so I go to sea to win.” Like his legends, “Russell Coutts and Paul Cayard, who taught me so much when I was on the Moor of Venice.” Among ocean sailors Mura particularly likes Michel Desjoyeaux, because “he created a new way of boating.” His favorite sportsman (did you have any doubts?) is Gigi Riva, Cagliari’s historic flag.

LA ROUTE DU RHUM AND THE DREAM VENDÉE GLOBE
What if Italy could finally put together a team to participate in the Volvo Ocean Race? “I would love to be a part of it,” explained the Sardinian sailor, “but only if it was a serious project, because the VOR is a regatta that has to be approached well. Again, I’m not the type to go to the ocean to make a number“. In Mura’s head is the Vendée Globe: “When I bought Vento di Sardegna, I was already planning for my future presence at the Vendée. Hopefully I will be able to find the budget to buy an Imoca 60. But let it be ‘on the bubble.’ I really appreciate Alessandro Di Benedetto, who participated in the regatta with great humility, but the way I am, I would not have launched into that project without being sure of my competitiveness.” While waiting to find the funds for the solo round-the-world race (“it’s not the case to launch challenges, I’ll talk when I have something concrete in hand”), Mura is preparing for the 2014 Route du Rhum, “the only regatta I can participate in with my old but trusty Open 50. I hope to repeat the success of 2010: it’s a crazy media event, very well followed in France, second only in ‘share’ to the World Cup.”