Fred Rebell, the man who crossed the Pacific thanks to a self-made sextant 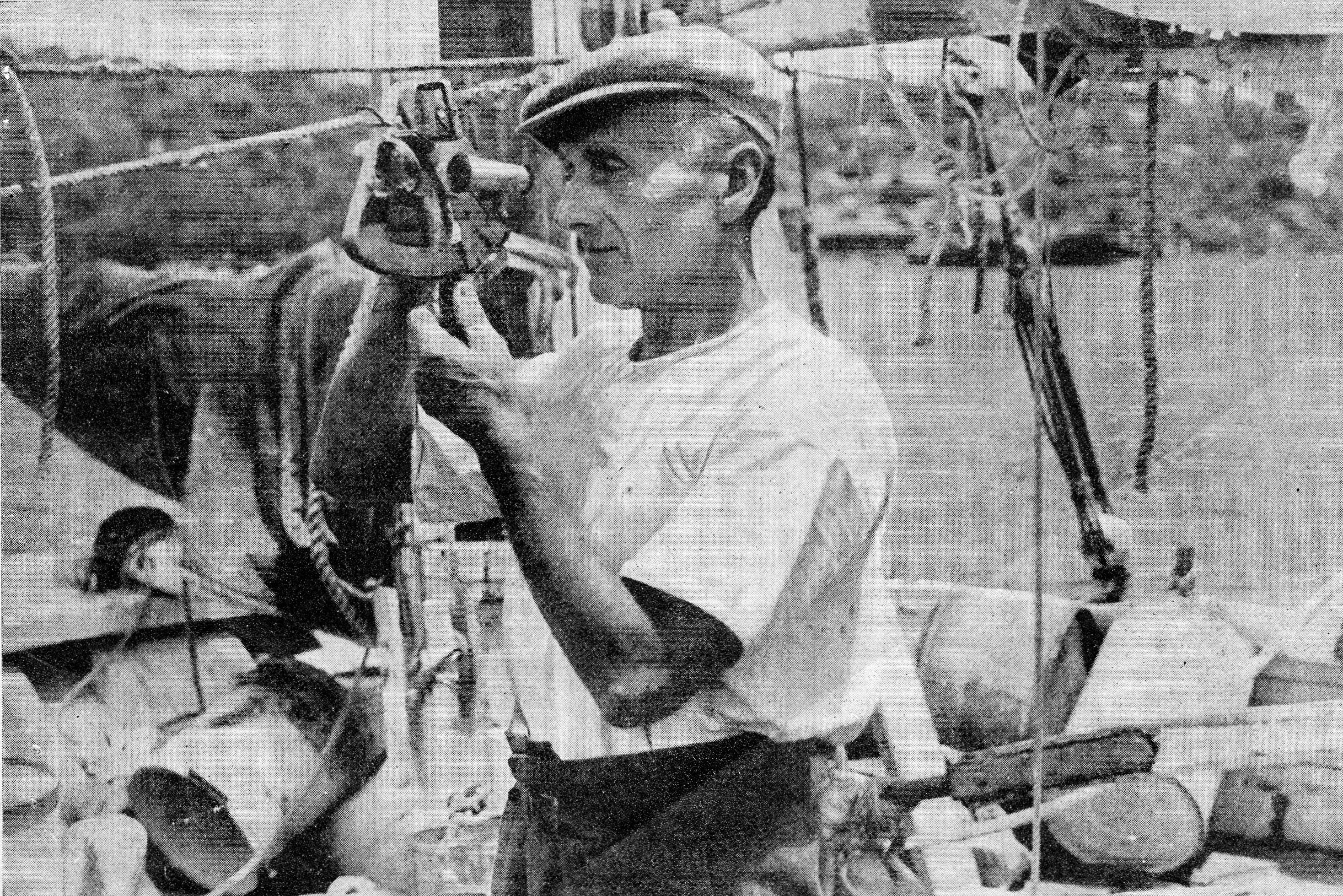 Browsing the web for news, one comes across some really interesting stories. Like that of Fred Rebell, the Latvian sailor who in 1931 made the crossing from Sydney to Los Angeles in a 20-foot boat with the help of a self-made sextant, to get to America without a visa: we found it on Culturamarinara.com and thank the author Gian Filippo Pellicciotta for honoring a brave sailor who, though less famous than others, was among the pioneers of ocean sailing. Here it is in its entirety:

THE STORY OF FRED REBELL AND THE SEXTANT WITH A SAW
Fred Rebell, actually Paul Sproge was born April 22, 1886, in Windau, Latvia. As a young man, feeling pacifist and not wanting to serve in the czar’s army, he went to Germany without a passport. In a café in Hamburg, for two marks, he got back a not-so-clean one, since it belonged to a deserter sailor. He said to himself then, “You don’t throw away a watch because it has a crooked hand: my passport just needs a little fine-tuning.” The name Fred Kabull became Fred Rebell ” the youngest deckhand in Hamburg” because he had only one hour to live. He was thus able to avoid recruitment into the army. 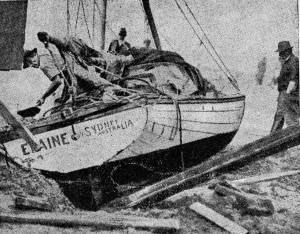 EARLY SEA EXPERIENCES AND THE CRISIS
He then boarded a ship as a coalman, and set out to travel the world. In 1907 at the age of 21, he clandestinely boarded another ship and, without being found, landed in Australia. He then became a peasant, but unfortunately the peasant girl, who came from Latvia as a result of a newspaper advertisement, did not like him, and instead caused him a lot of annoyance; he left her and took up with a woman named Elain: this became the name of his future boat. Unemployment in 1930/31 made him desperate and directed him toward the idea of reaching the United States. This country, however, did not issue visas. Rebell in front of the consul who was not helping him said, ” Look, in a short time I will be in America. I’m not going to pay for the trip, I’m not going to embark clandestinely, and I’m not going to enlist as a sailor…What’s more I’m going to stay there as long as it pleases me, and I’m going to leave when I don’t feel like it anymore….And I’m not going to apply for a visa from any consul!” The consul thought he was crazy and put him at the door. 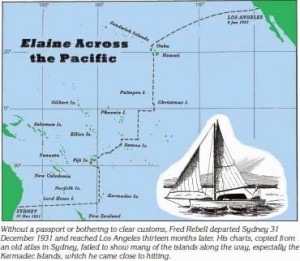 THE CRAZY IDEA INSPIRED BY GILBOY
Rebell was 45 years old and had never sailed before. Since they did not want to transport him to America, he would transport himself there, as Bernard Gilboy had done. He found work accepting lower-than-normal wages and managed to save up twenty pounds with which he bought a small boat. It was a 6-meter by 2.15-meter drift boat intended for racing in Sydney Bay, with overlapping planking, no enclosed deck, and a freeboard that barely reached 50 cm. Such a hull would never withstand a bit of sea. Rebell doubled the number of bones and added a false keel. He did not set up an actual deckhouse there, but tent cloth stretched over half circles. Toward the stern it remained open (a folly Gilboy had not committed). He increased the sail area of auric arming, procured six months’ worth of provisions, made water crates out of old milk and bought an alcohol stove. Three shortcomings remained: Knowing how to maneuver, knowing navigation, and procuring instruments. As for the first point, he trained in Sydney Bay, then went to the public library and studied himself some theoretical sailing maneuvering and thought that would be enough…at 46. For the second point, he bought on a stall a 70-year-old navigation manual that he put on board to sleep, thinking he would have time to read it once at sea….He copied, he still says, the necessary charts from an atlas, also 70 years old, a time when many islands had not yet been discovered. 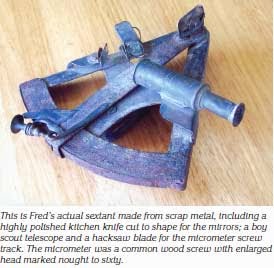 THE “CRAFT” TOOLS
Nautical instruments did not embarrass him much, because he made them himself. The way he tells it might sound like a story, but it is instead truth: these devices have been examined by trustworthy experts and photographed, and they are just as Rebell describes them. We quote the passage, “….I needed first of all a sextant. Impossible to do without…the device must be constructed with the utmost care, as the slightest inaccuracy can result in errors of hundreds of miles in the calculated position. I used for mine a few pieces of iron from a bottle cage, a small spyglass used by Boy Scouts (which had cost me a shilling), an old metal saw, and a stainless steel sharpener: the blade of the latter, cut to pieces, supplied me with the sextant’s mirrors. It was necessary to make them optically flat : I smeared one of the sides with asphalt so that it could grip my fingers, and rubbed the other face on a good glass covered with emery powder, the fineness of which I gradually increased. I finished polishing the steel to a mirror finish by means of a cloth soaked in the jewelers’ polishing paste. The saw blade was for the angle scale, and I had chosen it because of the regularity of its teeth and because it could be bent into a regular arc. I chose the radius of curvature so that each tooth corresponded to half a degree. I stemmed the blade so that I could straighten its teeth, and as a recall screw, I took a simple wood screw, which meshed perfectly with the blade.” Then there was the manufacture of the solcometer to gauge the distance traveled. This instrument consists essentially of a float equipped with fins which, when towed by the boat, takes on a rotary motion proportional to its speed, and, by virtue of a flexible joint, operates a tachometer located on board. I constructed my float with a piece of broomstick, to which I fixed aluminum fins that made such an angle with its axis as to make every thirty centimeters a complete turn. As a tachometer, I converted an old clock, so that, for every mile traveled corresponded to one minute of its dial. When I made tests with this solcometer, I found that it had an error of 20 percent, but in a measuring instrument an error does not matter, when it is known and constant.”

On December 31, 1931, he left Sydney seasick. Well this man arrived in America. On January 8, 1933, he drops anchor in San Pedro, near Los Angeles, after a stopover in Honolulu, having presented himself to the official with a passport made by him! The sailor’s ingenuity trumps all….