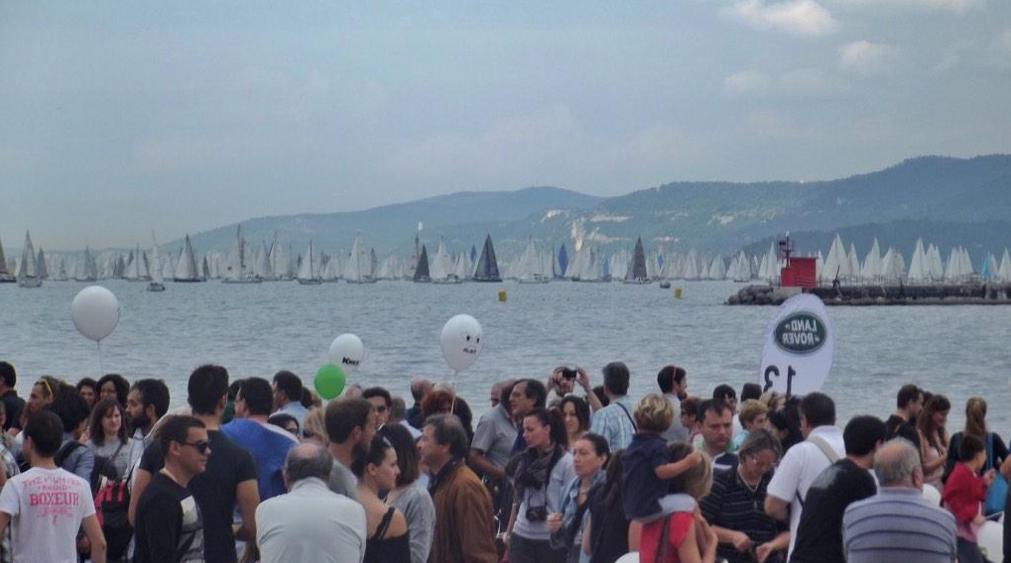 Following the Barcolana from the press room feels like being in the stadium. Everyone screaming, getting excited about their heart boat. Crazy. In the end, Esimit Europa 2 came out on top. Here are all the category winners.

ALL RESULTS
Igor Simcic’s Esimit Europa 2 won the 46th Barcolana for the fifth consecutive time, stopping the clock at 12:38 p.m. today. Spectacular and unique picture of a perfect regatta, with 1878 entries and 922 arriving in the time limit and over 300 thousand people ashore. Made very challenging for the tacticians due to the lack of wind, the race was shortened by the Race Committee, which arranged for a shortened course with a finishing gate at buoy number 1, after just over 4 miles of sailing. Esimit Europa 2 finished the course in 2 hours, 38 minutes and 38 seconds.

HEART-POUNDING ARRIVAL
For more than two hours Esimit Europa 2 and Jena No Borders Team engaged in a slow match race among 1878 boats, only to find themselves about 600 meters from the finish line embroiled in a becalmed that put Illyteca and Tempus Fugit (TuttaTrieste) back in the game, thanks to small gusts in the Gulf. The two “little ones” gained meter after meter and found themselves battling near the finish line with the two big boys of the race, with a grit that only a trial with nearly 1900 sailboats can inspire. Esimit Europa 2 saw Illyteca approaching dangerously and had to fight meter after meter to win its fifth Barcolana, a minute and a half ahead. Marino Quaiat’s Illyteca, with Jaro Furlani, Maurizio Bencich, Giulio Trani, Sandi Suc, Michele de Gennaro, Blaise Digovic, Marco Pustiani and Marino Quaiat himself at the helm, fought like lions for the dream of an epic victory, which they came close to with a brilliant second place less than two minutes behind Esimit Europa 2. The duel for third and fourth place was purely a family affair: Gabriele Benussi, at the helm of Tempus Fugit, and Furio Benussi, at the helm of Jena No Borders Team, battled for third place. First of the two on the line was Jena No Borders Team with Furio Benussi and Mitja Kosmina at the tactician, protested later by brother Gabriel of Tempus Fugit. A protest discussed at 5 p.m. and ended with no consequences for the ranking.

Historic regatta also for Garda’s Giovanni Pizzati, who came down from Desenzano on his Bravissima, fifth overall and first in the fourth category. Sixth place for Rigoni di Asiago’s Ourdream, with Lorenzo Bressani at the helm, followed in seventh overall by Barraonda Doctors with Africa, first of the second class, with Lucio Provvidenti and Diego Paoletti beating direct rival Sayonara Mission Moldova of Roberto Bertocchi. Twelfth place and category win for A-Team Lino Sonego, the TP 52 entrusted to Stefano Spangaro and Giorgio Martin, while Alien Knez Hotel Victoria wins in the fifth class and among Ufo one-designs.

In the “white cloud” of 1878 entrants, of note was the performance of “Drake passage DHL Express” with Andrea Micalli from Trieste at the helm, ninth overall and first of the Farr 80, the one-design hulls returning from the round-the-world race. Massimo Zannini’s Ypsilon, on the other hand, won the Generali Trophy for the first boat in the Cruising class: it was a 41-foot hull designed by Roberto Starkel of Trieste, 15th overall and second in the first category.

“Honor to the winners,” said Barcola and Grignano Sailing Society President Mitja Gialuz, “in a difficult and beautiful regatta. We chose to shorten the course at the end of the first side because there was almost no wind and we wanted to give all registered boats a chance to reach the finish line. At the end of this Barcolana I want to thank all the registered boats that gave us their trust, the institutions, the police and the Trieste sailing clubs that worked with us to organize this event. We have shown to the world and to all sailing enthusiasts a unique and wonderful city, a Gulf that knows how to unite on the same starting line familiar, technological hulls with victory ambitions and boats of the Adriatic tradition. The victory of Esimit Europa 2 was even more beautiful because it was hard-fought, thanks to an outstanding Marino Quaiat with his RC44 Illyteca.”

STATEMENTS FROM THE TOP THREE AT THE FINISH LINE

Igor Simcic, owner of Esimit Europa 2: “This victory-our 34th consecutive since the beginning of the Esimit Europa 2 project and the fifth at the Barcolana-was very hard: a very difficult race and we took more than two and a half hours to cover 4 miles. We had to use all our energy, the potential of the crew and the boat. We were put to the test, honor to our opponents. For us it was a regatta we will never forget. Next year we will not participate in the Barcolana because we have other sports programs, but this does not mean that today’s is our last participation.”

Jaro Furlani, helmsman of Illyteca: “We like to think that we are the moral winners of this regatta. The key to this result was our feeling for the wind shifts, which allowed us to conduct the race as we planned it this morning.”
Marino Quaiat, owner of Illyteca: “We are obviously more than satisfied with our outstanding performance. We have shown that even small boats can put on a show, and above all, after so many years, we are happy to have produced a photo finish that did not fail to excite those who follow such a splendid event as the Barcolana.”

Furio Benussi, helmsman and team manager of Jena No Borders team: “Jena No Borders Team returned to Trieste with the dream of winning the Barcolana: we narrowly missed it, but we are equally happy. We got the start right but we expected wind from the right, while the rotation came to the left towards the finish. Esimit Europa 2 caught the gust before us.”