Best of 2013 – François Gabart, the new myth of the oceans

At the exact moment he crossed the finish line of the solo, nonstop round-the-world race in front of Les Sables d’Olonne (the French town that directly faces the Atlantic and from which he set out with 19 other sailors), François Gabart set two important new ocean sailing records. At 29, he became the youngest winner in the history of the Vendée Globe (started in 1989), winning the seventh edition with a time of 78 days, 2 hours, 16 minutes and 40 seconds, Improving by as much as 6 days and 53 minutes the previous record (84 days and 3 hours) with which Michel Desjoyeaux achieved his second victory four years ago. The feat scored by Gabart is sensational and in no way suffers comparison with the record for the absolute round-the-world sailing trip of 45 days, but set (in 2012) by a 14-person crew under the command of Loick Peyron on the 40-meter trimaran Banque Populaire, and with the 57-day solo record set in 2008 by Francis Joyon on the 30-meter trimaran IDEC. Because François Gabart became the first solo sailor to complete a circumnavigation of the world under sail in less than 80 days, but on a monohull.

OUTSTANDING NUMBERS
Aboard his Imoca 60 (18.28 meters in length) Macif traveled precisely 28,646.55 miles (53,053 kilometers) at an average of 15.3 knots (equal to 28.33 kilometers per hour). Did you get a headache reading all these numbers? Too bad, because it’s not over yet. In fact, while racing across the Indian Ocean, from the Cape of Good Hope (south of the African continent) to Cape Leeuwin (the tip at the southwestern tip of Australia) Gabart one day also covered 534.48 miles in 24 hours (at an average of 22.27 knots). Guess what? Yep, record too (again for a monohull conducted solo; in 2008, the crew of the Volvo 70 – 21.5 meters long – Ericsson 4 skippered by Torben Grael covered 596.6). To top it off, the gap of just 3 hours, 17 minutes and 12 seconds (after 78 days of racing!) that he inflicted on Armel Le Cléac’h on Banque Populaire is the shortest gap between first and second place in Vendée Globe history.

TO SUCCESS WITH LITTLE IN THE WAY OF
François Gabart in France calls him the “lucky guy,” someone who turns everything he touches into gold. His ascension to the Olympus, in fact, was very rapid and, above all, devoid of a gavetta. For one thing, winning the Vendée Globe coincided with his first round-the-world race. But even of Atlantic crossings, it’s not like he boasts that many; of successes, then, even fewer. Yet he was the competitor with the second newest boat in the fleet, backed by one of the most important sponsors in France and with a Formula One team behind him. Truly unbelievable for someone who until five years ago was racing dinghies dreaming of going to the 2008 Beijing Olympics and studying for an engineering degree. 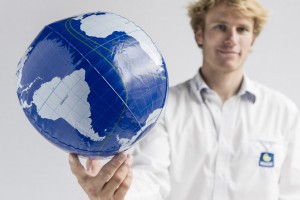 THE RAPID RISE OF GABART
François Gabart is originally from tiny Saint Michel d’Entraygues, in the Charente department, but now lives, with his partner and 10-month-old son, in La Forêt-Fouesnant, Finistère. He is the youngest of three siblings had by Dominique, a dentist, and Catherine, a magistrate. He began venting his competitive spirit at the Optimist straps, winning the national championship at age 13 and, shortly thereafter, the Moth class championship. Then he got on the Tornado, which was an Olympic class until 2008, and in 2004 he won the Junior World Championship. He took his first steps in professional sailing only in 2006, being part of the crew of the trimaran Sopra Groupe that competed in the Tour of Europe from London to Nice and participating in the Cap Istanbul of the one-design Figaro class. The breakthrough year was 2008, when he emerged as the best young man in the Solitaire du Figaro. In 2009 he finally boarded an Imoca 60 for the first time and finished second in the Transat Jacques Vabre accompanying Kito De Pavant on Groupe Bel. The “lottery,” however, Gabart won it in 2010, winning the French solo sailing championship in which a sponsorship from the insurance company Macif for a season on the Figaro class was up for grabs. Gabart was thus able to participate in the Solitaire, finishing in second place, just behind Armel Le Cléac’h, his great rival in this Vendée Globe, with whom he alternated twenty-two times at the head of the fleet during the 78-day round-the-world race.

Just in 2010, Gabart started thinking about tackling the Vendée Globe, despite Michel Desjoyeaux telling him that it was too early for him and that he did not have the experience needed for a solo round-the-world race. Which was absolutely true. However, Gabart had the trust of the executives of Macif (the largest automobile insurance company in France), and as is known, with money, many problems are overcome. Thus, in a short time, Gabart, Macif and the Mer Agitée ocean preparation center in Port-la-Forêt (directed by Jean-Paul Roux and Desjoyeaux himself) signed an 8 million euro agreement for a 4-year program ending in 2014 with participation in the Route du Rhum.

A FORMULA ONE TEAM

In practice, François Gabart has become overnight like a Formula One driver, who has a team behind him that works entirely for him, so that he can concentrate solely on bringing the vehicle placed at his disposal to its maximum. His “stable,” Mer Agitée, built his boat at the facility’s associated shipyard, CDK Technologies, and provided him with a captain, project manager, performance analyst, coach, electronics engineer, and an entire shore team. There is nothing scandalous about this. In France, this is how it’s done: Banque Populaire and Groupama, for example, are real companies with a fleet of boats that they entrust to skippers and crews under contract from time to time. François Gabart admitted that the record sailing time with which he won the Vendée Globe also depended on the fact that his Macif never suffered a breakdown that forced him to slow down or even stop to make repairs.