Let’s stop for a moment and think carefully: 65 knots. Let’s close our eyes and slowly repeat it over and over in our heads: 65 knots of speed with a sailboat. At a time when everyone is shooting their mouths off, telling with disarming simplicity that they have sailed in 40 knots of wind, as if 20 were little, and that they have faced 10-meter waves, because it seems that 5-meter ones no longer make an impression, the news of 65 knots of speed (65.45 to be precise) is in danger of going unnoticed. Which would be criminal, since this “is not science fiction, but science.”
Yes, a sailboat, Australian Paul Larsen’s Vestas Sailrocket 2, managed to go 121 kilometers per hour, catapulting the history of sailing into a new, previously unknown era. Little does it matter that this is a record, indeed better not to talk about it at all, because one would risk losing sight of the sensational fact. Sixty-five knots is a figure so “beyond” any speed previously achieved by any sailing vessel (boat, windsurfer, or kitesurfer that is) that it deserves much more attention than just an entry in the speed record book.

AN IDEA BORN WHILE SAILING ON MULTIHULLS


The leap forward made by Paul Larsen is historic. The chronology of man’s challenge in pursuit of maximum speed under sail tells that it took thirteen years to go from 30 to 40 knots and that it took as many as twenty to break the 50-knot wall. Then, in just five years, it went directly to 65 knots, without even going through 60. It all happened in Namibia, in Walvis Bay, on a magical November in 2012 when Paul Larsen flew over the water (which is always flat there, even when the wind is blowing hard) in his Vestas Sailrocket 2, finally seeing a decade-long dream come true. That’s right, because the Australian sailor, a longtime resident of England, had gotten the idea of becoming the fastest man in the world on a sailboat earlier this millennium, when he had been part of several crews in transoceanic and around-the-world races on maxi multihulls.
While his teammates were simply striving to make the boat go as fast as possible, he also wondered how a 30-meter trimaran could go so fast and began to fantasize about new solutions and impossible speeds. When we write that Paul Larsen flew over the water, we mean that he sped over the surface of the sea and forget that, instead, he also flew in the true sense of the word. It happened with his first Sailrocket prototype (which translated really means “sail rocket”), on which the cockpit was located at the extreme stern.
As the boat picked up speed, the bow began to rise, gaining lift, and, several times, Larsen found himself somersaulting backwards into the sky and landing ruinously on the water. “One time” – recounts his partner, Helena Darvelid – “he came out of the emergency room with his head so swollen that he could no longer put his helmet on. Which was good, because otherwise he would have immediately attempted another run.” When it comes to “running,” it should be remembered. the absolute sailing speed record is calculated on the average speed recorded on a measured base of 500 meters. In fact, with Vestas Sailrocket 2, Paul Larsen even touched a top speed of 68 knots (126 kilometers per hour). 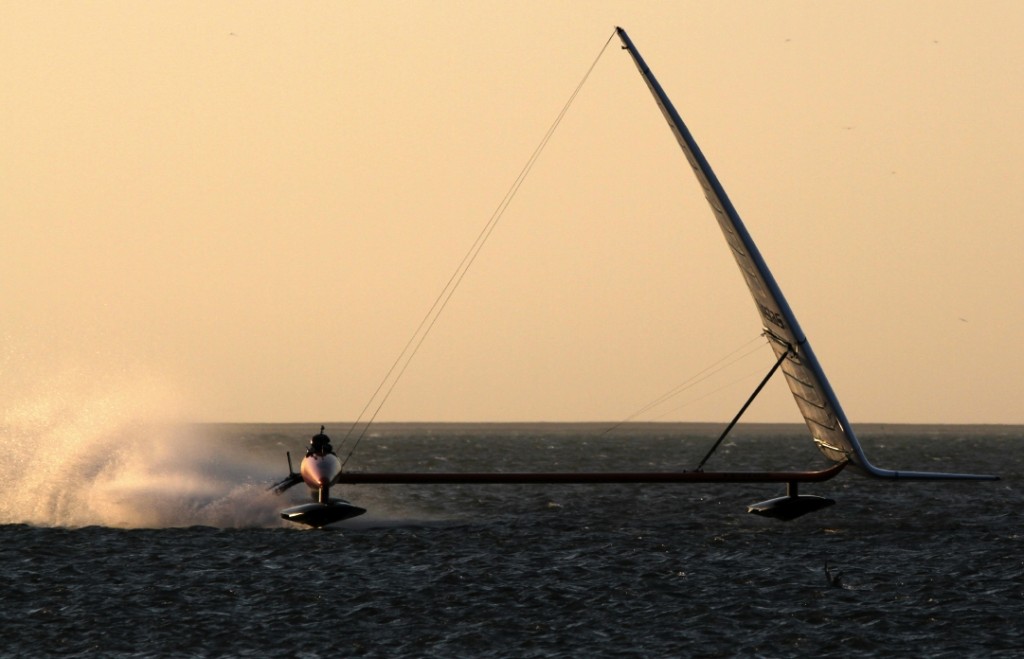 WORKS LIKE A GIANT WINDSURFING
Its second “sail rocket” was launched in 2011 and is an evolution of the first Sailrocket, built in 2004 and modified several times (it even had a fabric sail at first). In addition to being significantly larger, with a length and width of 12.20 m versus 9 m for the first prototype and with a wing area increased from 16 sq m to 22 sq m, the biggest difference lies in the pilot’s cockpit positioned forward to keep the bow always in contact with the water. Of course, talking about length and width for a sailboat like Vestas Sailrocket 2 is quite relative. These measurements, in fact, refer to the main elements that constitute it: namely, a fuselage that resembles that of a glider in shape, from which starts a crossbar of the same length, but with an airfoil section, at the end of which the rigid wing is positioned. Now, it must be imagined that this “L” structure does not sail straight, but rotated at an angle of 20° to the direction of the course.
To understand, when Larsen looks forward, his eyes are not facing the bow of his fuselage, which, instead, is aligned exactly against where the apparent wind is coming from, to offer as little drag as possible. Vestas Sailrocket 2 is actually a tripod that rests on three skids with a volume of 300 liters each and functions as a giant windsurfer. To pick up speed, he starts at slack and, as he accelerates, positions the fuselage to be sideways from the true wind direction, which coincides with the 20° apparent wind. Oriented at this angle to the longitudinal element, thus in the direction of heading, are also two of the three skids, while the one at the bow, to which the rudder blade is attached, is controlled by Larsen to direct his “rocket.”
Just like a windsurfer, at the beginning of acceleration Vestas Sailrocket 2 is difficult to control. For this, there is a fixed fin on the stern skid that is raised once the boat stabilizes. At maximum speed, however, the left skid, located at the foot of the wing, rises completely out of the water to decrease friction. This is achieved by the airfoil of the transom and the horizontal extension of the wing itself, which generate the lift necessary to make Vestas Sailrocket 2 sail as “light” as possible, just above the surface of the water.
The sail (with an asymmetric profile – so the boat can only ever sail in one direction and at the end of each run it must be towed to the starting point with the wing down), again as on windsurfs, is tilted to create that perfect balance between vertical lift and lateral force that generates the most efficient forward thrust. Influencing the operation of this perfect aero and hydrodynamic system is the foil, which has a drift plane angled at the same angle as the sail to work in tandem on lift and thrust. To combat the phenomenon of cavitation, its profile is also asymmetrical and its section is wedge-shaped: pointed at the leading edge and truncated at the trailing edge.

The Airbnb for water sports has arrived: it’s called SHAREWOOD

SHAREWOOD is a sharing economy startup that organizes peer-to-peer exchange of outdoor materials in the categories of Water, Snow and Bike sports. Basically, we are telling you about the Italian version of the sportsman’s airbnb! The product categories that Sharewood

Is kiting a sail? Yes, and now their inventors say so too

Guys, get this straight: kitesurfing is sailing. And as of today, it is also for the French, the inventors of kiting. In fact, as we read on the website of journalist and kiter David Ingiosi,“the free flight federation loses kiting,

VIDEO Do you think stadium sailing is the future?

The video we show you illustrates what will happen in Nantes from December 14 to 16, 2017: an indoor sailing show for the general public focused on windsurfers and dinghies, propelled by artificial wind from large fans. All very nice

VIDEO Kitesurfer, do you want to fly easy? There is a new foil for you!

The world of foils is constantly evolving, and designers’ attention to these appendages has grown exponentially, as this is an area in which much is still to be discovered. The latest invention, in order of time, is called Twinfoil and