Ambrose, a story of passion… with a (more than) happy ending

We wrote about him some time ago (you can find the article at the bottom, which came out in last March’s Journal of Sailing): Ambrogio Beccaria, the golden-handed boy who dreamed of the world of Mini 650s, found one rotting away in Portugal and went on a voyage of hope to pick it up, put it back together with the hope of being able to race it soon. 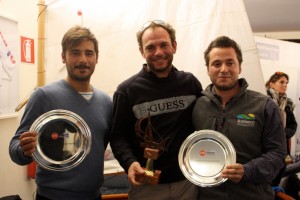 We resume the story to report the. happy ending: Ambrose this year became the Italian Mini 650 Champion in the Series class (among the Proto won Michele Zambelli), he found a sponsor: his Pogo 2 Alla Grande will be supported by Ambeco, which will follow him for the next few seasons until the 2017 Mini Transat, his stated goal from the beginning. In his first season on the Mini, in a class, the series Mini where competition is always fierce, the young skipper had a remarkable debut. Incidentally, Beccaria’s name also appears in the list of 100 nominees for the 2016 Sailor of the Year, which we are presenting to you just now.

THE STORY OF AMBROSE BECCARIA (FROM THE MARCH 2015 GDV)
Given his name, you would expect to meet Ambrogio Beccaria in a Milanese café in Galleria Vittorio Emanuele. Instead, we interrupted him in a “crazy and desperate” phase of work in a shed in La Spezia, where he has revived a Mini 650 aboard which he expects to take part in the 2017 edition of the Mini Transat, the historic solo Atlantic race that takes place every two years starting in Douarnenez, Brittany, and finishing in Pointe-à-Pitre, Guadeloupe, after 3,700 miles of sailing. 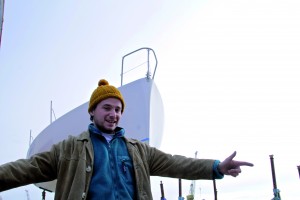 THE CHAMPION SKIFF DESIGNER
Ambrogio was born in Milan on Oct. 1, 1991, and is currently in his fourth year of Nautical Engineering in La Spezia, Italy. “In my future is boat design, but without ever giving up the world of racing. Only a complete sailor can create a good sailboat,” he says. “I started racing in earnest with a Laser 4000 that I bought together with two of my high school classmates (Stefano Zoli and Giovanni Liva) when I was 17 years old: an old boat that the three of us refurbished and with which we managed, last year, to win the Italian Championships and the Lario Cup by finishing at the top of the national ranking list, as well as winning a European bronze medal.”

MINI DREAM COMES TRUE
Beccaria loves to repair boats, let alone when the opportunity arises to have a Mini 650 on his hands: “I had had the idea in my head for some time to jump into the world of Minis, which I have always found fascinating and ‘real’. Especially given the fact that my ocean experience is nil and my “long” participations are limited to the Mediterranean aboard offshore barges, where often under the guise of being the youngest I was relegated to marginal roles. In Spezia, I became commander of a 17-meter catamaran, and I started setting aside 90 percent of each of my monthly salaries so I could buy a 650 when the time was right. I’m a competitive guy, so I wasn’t going to settle for just any boat, I wanted one that had good potential, and one that was mass-produced (because prototypes are out of my budget), at the cost of waiting longer. The opportunity presented itself in May 2014 when I read among the announcements on the French Mini class website that the Pogo 2 (number 539 in the class), with which Ian Lipinski had won the Mini Fastnet only to be featured in a sensational accident at the 2013 Transat, was for sale in Cascais, Portugal.” 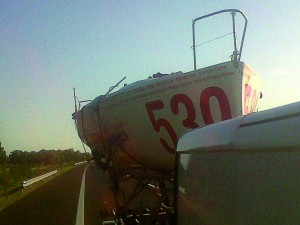 THE JOURNEY OF HOPE
Ambrose didn’t think twice: “I paid a deposit to block the boat, then called Stefano Zoli, to whom I had given a hand in refitting his Grand Soleil 48, asking him to return the favor: ‘Do you feel like accompanying me to Cascais to get a boat?’ was my question, which received a positive response. We found a renter in Milan who put a van with a trolley at our disposal, and we set off for Grosseto where a friend of mine, Oris D’Ubaldo, was keeping his Mini in dry dock and had allowed me to borrow his reservoir. I remember we took the boat out of the reservoir by putting it on a trolley using an excavator in the middle of the Maremma, crazy stuff!” From Grosseto the two set off for Cascais, making only one stop in Varazze: “From Varazze onward we continued straight to Cascais, never stopping. Taking turns driving, just as one does in ocean races: it took us 24 hours, at an average of 80 per hour.” Once in Cascais, Ambrose could not immediately find the boat: “It was hidden behind a Comet; it took us hours to locate it. Ian Lipinski’s former jewel lay in the water in a truly pitiful condition: the hull was ruined, there was still food inside from the 2013 Mini Transat, the mast was on board, sheared into three pieces, there were still some sails flapping. When I saw it, I had only one thought: ‘That’s it, I really am an asshole.’ Because I knew I was going to buy it anyway. It cost me 7,000 euros. It took us a day to clean it, and I realized that there would be more work to be done than expected. But I was convinced. To hoist the boat onto the vessel placed on the trolley we were given a hand by the guys from VO65 Abu Dhabi who were training in Portugal ahead of the Volvo Ocean Race. On the way back, we grinded direct 2,200 kilometers at an average of 70 and arrived in Spice.” 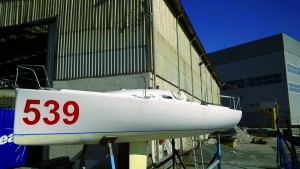 SITE WORK
The boat is there. Now it’s just a matter of elbow grease: “I waited until September because I was busy with work and university, then I locked myself in a shed, together with my friend Vittoria Ripa di Meana who decided to give me a hand. We cleaned up the boat, removed the antifouling, disassembled all the parts on deck that needed to be replaced, some areas were delaminated so we had to intervene with re-laminating operations (by the way, thanks to Tommaso Stella for advice during refurbishment). After 700 hours of work, the boat was ready to launch.” 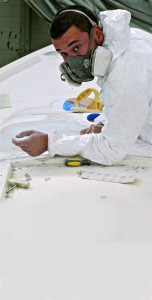 MINI TRANSAT TARGET 2017
Beccaria plans-once he finds the backing of a sponsor, a feat that is far from easy-to prepare for the 2017 Mini Transat: “In 2015, I reckoned I could make it without sponsorship: I will do all the races of the Italian Mini circuit (this is five races), many in doubles, together with Giovanni Sanfelice of North Sails. I will be the youngest participating skipper: this will be a season of adjustment, where I will mostly learn how to get the best out of the boat. In 2016 I’d like to get serious and get into solo sailing: maybe mushing in the Atlantic and why not, participating in the Les Sables-Azores-Les Sables (2,540 miles) and other races on the French circuit, but then I’ll really need a partnership.” Read not even too veiledly between the lines: sponsor wanted…