40 YEARS OF SAILING – Ocean 1999 The forgotten adventure of the Amoretti brothers.

Year 1999. Four boys, an ’87 Volkswagen Passat and an ’81 Ford Taunus, an incredible family affair behind them, the ocean. This is the story of brothers Marco, Mauro and Fabio Amoretti, who, in the company of Marcolino De Candia, embarked on an unprecedented adventure as they traveled the stretch of sea between La Palma (the Isla Bonita of the Canary Islands) and Martinique in their two cars filled with polyurethane foam.
The Amoretti brothers are the sons of Giorgio, a photojournalist, an out-of-the-box personality: provocateur, staunch defender of causes, free spirit. Giorgio attempted an ocean crossing in 1978 aboard what he called the “Automare,” a Volkswagen Beetle full of Styrofoam, but was immediately stopped by Spanish authorities. In 1999, he was diagnosed with a malignant tumor. The three sons and Marcolino, a close family friend, set to work hard.

Giorgio’s days may be numbered, and the boys want to give him a dream: to cross the Atlantic aboard two “Automare” with them. But George proves too weak to participate in the venture. It is May 4, ’99, the first rays of the sun light up the polished obsidian of La Palma: four curious individuals (very young, apart from Fabio, more than 30 years old, the son of Giorgio’s union with his first partner Lucia Morellato), after filling Passat and Taunus with styrofoam, provisions, and instrumentation, and equipping them with a life raft on the roof, launch these equally curious boats. 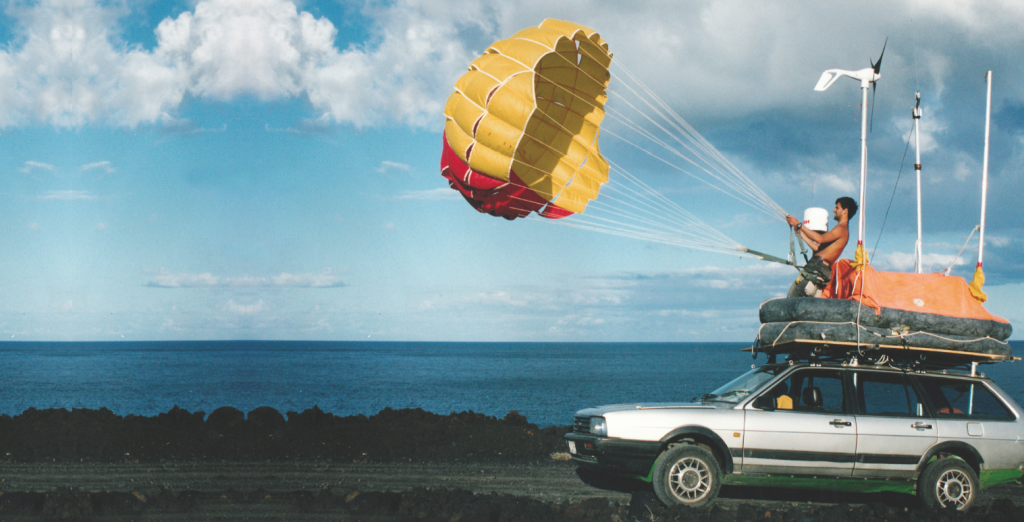 It is dawn, a time chosen by the autonauts to avoid the Civil Guard. The cars continue propelled by two outboards until they run out of gas. The boys don’t think twice: they detach the engines and watch them disappear into the depths of the ocean. The “engine” as of now is supposed to be an ascending parachute (another of Amoretti senior’s pet projects), but the unstable, light winds of the first few days of self-navigation make it unusable. Much better are a pair of sails, remedied from who knows which club in the Levante Ligure, mounted in a charlatan fashion on the roofs of cars by Marcolino De Candia. The two machines end up recalling, albeit vaguely, the Zodiac sailing dinghy “Hérétique,” on which French physicist Alain Bombard made a solo crossing from the Canary Islands to Barbados, drinking controlled amounts of water and juice from fish he caught. A volunteer castaway, back in 1952, to prove the theory that after a shipwreck people die more from despair than from hardship. Meanwhile, after 10 days of breezes, the currents keep the autonauts just a few miles off the Spanish coast, causing them to go in circles.

Fabio and Mauro decide to throw in the towel on May 14. Seasickness, morale under their shoes, and perhaps the knowledge that they are in an environment alien to them: they are brought ashore by the Tenerife helicopter. Marco and Marcolino, on the other hand, aboard a car on the ocean, have a great time. At sea they are free, free from the constraints of an increasingly competitive and materialistic society, a society in which they have always struggled to recognize themselves. All was well until May 25, when contact with the mainland was lost. The Imarsat satellite phone goes out, perhaps due to contact with water (“we take on water from the front seat!” Amoretti writes in the logbook), or due to lack of sunlight, which powers the photovoltaic batteries (only clean energy on “board”). The two appear to have disappeared into thin air. Marco Amoretti, 23, and Marco De Candia, 21, may have come to a bad end. “Silence from the Atlantic,” headlines the Secolo XIX, and all of Sarzana (where the Amoretti have settled) finds itself in turmoil.

“Let’s embark water from the front seat!”
Amoretti writes in the logbook

In fact, the boys are doing great; they are in perfect harmony. Marco writes, Marcolino meditates. Meanwhile, on May 28, Giorgio Amoretti died, and when Imarsat started up again on July 5, Serenella Vianello (mother of Marco and Mauro, Giorgio’s second partner) decided not to say anything to Marco, afraid that the news would cause him a psychological blow.

Cars prove to be relatively safe vehicles, Neptune is magnanimous, and oceanic depressions (including Hurricane Emily) spare the boys. Another parallel with Alain Bombard, who after 53 days at sea crossed the British ship Arakaka, is urgently needed: Amoretti and De Candia happen to encounter the Chevron Atlantic tanker, whose captain proves generous and throws numerous supplies overboard Retrieved from Marco by swimming.

Too many things they didn’t like. Too many uncomfortable things to admit:
it was possible to cross the Ocean almost as a joke with rickety cars.

They are on their 108th day in the ocean, and the sighting of the ship suggests that land is near. Meanwhile, Fabio, Mauro, and Serenella arrived in the Antilles to arrange for the arrival of the cars. They fly over the stretch of sea off Martinique, taking the incredulous journalists with them: the two Dantesque madmen are making it, they are one step closer to the finish line. In a radio contact, Serenella decides to reveal her father’s death to Marco, to spare the boy a terrible disappointment on the ground. Arriving in Port Tartane on August 31, after 119 days at sea, the autonauts are welcomed as heroes by the Italian and foreign media.

Then, darkness. Too many things they didn’t like. Too many uncomfortable things to admit: it was possible to cross the Ocean almost for fun, with rickety cars. They had succeeded in doing so by two guys totally unrelated to the world of solo sailing, lacking nautical knowledge, technical means and sponsors, moreover, shortly after Giovanni Soldini’s victory at Around Alone. The local Ligurian press was the only one to play on this contrast between antithetical ways of experiencing the sea, because both Soldini and the Amoretti family had ties to Sarzana. Today the images of the unusual journey continue to excite. Yes, it was true glory.

Taken from Journal of Sailing April 2010.

PrevPrevious40 YEARS OF IMAGES – When Time Stands Still.
Next#40yearsofsailing – Trapped in the ice – PHOTOSNext
In evidenza