VIDEO. Born to fly: on board SVR Lazartigue with François Gabart

What to do with an offshore sailing jacket and a lifejacket on, in a Genoese hotel lobby? Imagining it from the outside, the scene looks funny, but I have just finished the safety briefing for the outing on François Gabart’s Ultime Class trimaran, SVR Lazartigue, and we were specifically asked to try on the sailing jackets while wearing the jackets before boarding the boat. 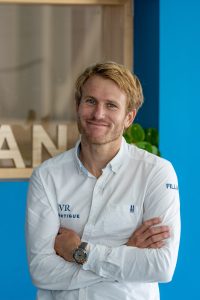 The 32-metre maxi trimaran is waiting for us outside the port, with a crew of four on board, including, of course, François Gabart. To explain who Gabart is to those who do not yet know him, we need only mention two episodes: he is the youngest winner of a Vendée Globe, that of the 2012-2013 edition when he was not even 30 years old, and then he pulverised the record for the solo round-the-world race on the trimaran Ultime Macif, in 42 days 16 hours, 40 minutes and 35 seconds, in 2017, a record he still holds.

One of the most important sailors in the world in short, who welcomes us aboard with a polite smile, in a T-shirt, shorts and flip-flops. I can’t help but be astonished, but I soon understand why. Mr. Gabart quickly shows us where to position ourselves and what to hold on to, then explains his haste: “We have borderline conditions to get up on the foils, let’s hurry up and try”. Gabart then disappears into one of the helmsman’s deck positions, which resembles that of a military aircraft cockpit. 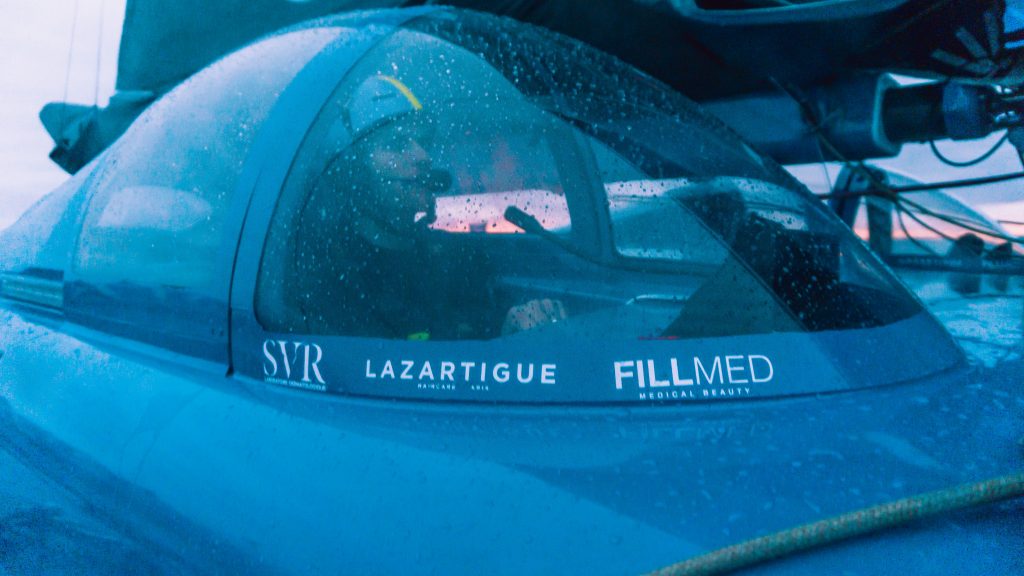 Gabart heaves the gigantic trimaran up to the wide windward mark, the boat “whines” and its helmsman makes it lean all the way to the transom, at which point we feel ourselves being pulled back by the acceleration and holding on to a line specially put in for this becomes a must. We are positioned on the transom, between the huge mainsail traveller and the catamaran’s net. I move from windward to leeward, and realise that the former is the wettest side. The foil doesn’t soak so much as touches the water, raising a huge spray towards the stern that showers us several times. The boat comes off the water at around 22-23 knots, we reach a peak of 29 in about 10 wind.

The feeling we did not expect, however, was not only that of speed, but also another one. We have to admit that we sailed in calm seas, but this feeling was also confirmed by Mr. Gabart: the giant trimaran also uses the foils as if they were shock absorbers. It never crashes back down on the water, but when it does, it is as if the foils, like a spring, bring it back up, thanks also to the adjustments that the helmsman makes live.

In less than an hour we have covered practically 30 miles and the mobile phones have lost coverage. The wind drops and Gabart comes out on deck. We then have the chance to talk to the French champion, to carry out the interview you will see in the video, during which Gabart ‘introduces’ us to his SVR Lazartigue, and also explains a bit about his vision in terms of ocean sailing. The foils in the ocean, the speed, the complexity of these boats and the present and future plans. Could there be a new round-the-world attempt in 2023, after this autumn’s Route du Rhum: solo or crewed for the Jules Verne Trophy? Lazartigue can potentially do both, and is designed to set records in the ocean.

Inside the SVR Lazartigue trimaran

In the belly of the trimaran hides a real control station, where Gabart will be positioned in the resting moments, never ceasing to monitor the boat’s performance. We are not allowed to film here, but can only draw on the official material that the team has granted us for reasons of technical confidentiality. What we can tell you is that Gabart will be sitting on a sort of small seat with a folding backrest, and will have at his fingertips not only the helm of the boat, but also the adjustment that manages the trim of the rudder trim tab, as well as all the main rigging that flow into the winches hidden inside.

On deck, in fact, there is no exposed manoeuvring to achieve the best possible aerodynamics. There is, among the various automatic controls that this boat has, also a sort of emergency button, with which we drop all the sails and pull up the foils to stop the boat.

We are allowed to helm, but by now the wind is below 10 knots and getting on the foils becomes impossible. Between the wide windward mark and the traverse with about 7 knots of wind, we still make 14-15 knots, and we are surprised to see how responsive this 32-metre “beast” is. The return to shore is approaching, we say goodbye to Gabart and his crew and jump into the dinghy.

We take a selfie with Lazartigue behind us and on the phone screen we see our faces smiling like that of a young boy on his first sailing trip with a bit of wind. Because what we have had the opportunity to see represents the technological state of the art of ocean racing sailing, as well as one of its expanding frontiers, that of foiling in the ocean, all explained by one of the world’s strongest sailors.

Who will be the young talents of Luna Rossa? Open selection, here’s how they take place

Funniest comments sent to the Sailing Newspaper One of our contributors had fun unearthing and collecting the funniest, most critical or cryptic comments and titling them in this collection, which we hope will lighten your day and spark your irony.