“My dream boat? In front of me is the one that comes closest to it‘.

This was the comment of the Israeli owner of the new Vismara VM 80 ‘Moka III’ as soon as the boat touched the water for the first time, during the launching ceremony at Arpeca in Viareggio. 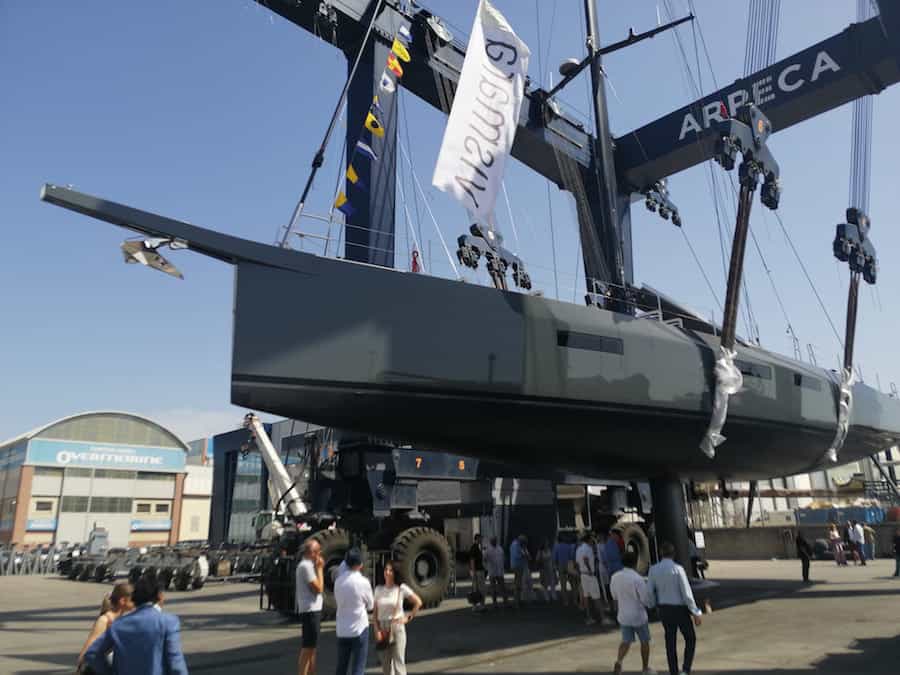 This 25.92×5.80 metre fast cruiser is indeed one of those boats that leave a mark. When looking at her, you say ‘this is definitely a Vismara, but there is something different about her’.

The credit goes to the heterogeneous team that built the boat: a large team that does not lack important names, in addition to the soul of the yard Alessandro Vismara. There is Sebastiano Rech Morassutti, one of the wizards of composite construction. There is the yard’s CEO Marco Marioni, who has brought his managerial know-how to the company. And then there is the young and promising Otto Villani, a project manager we will hear about. There are the Polish guys from Rega Yacht who oversaw the construction of the hull. 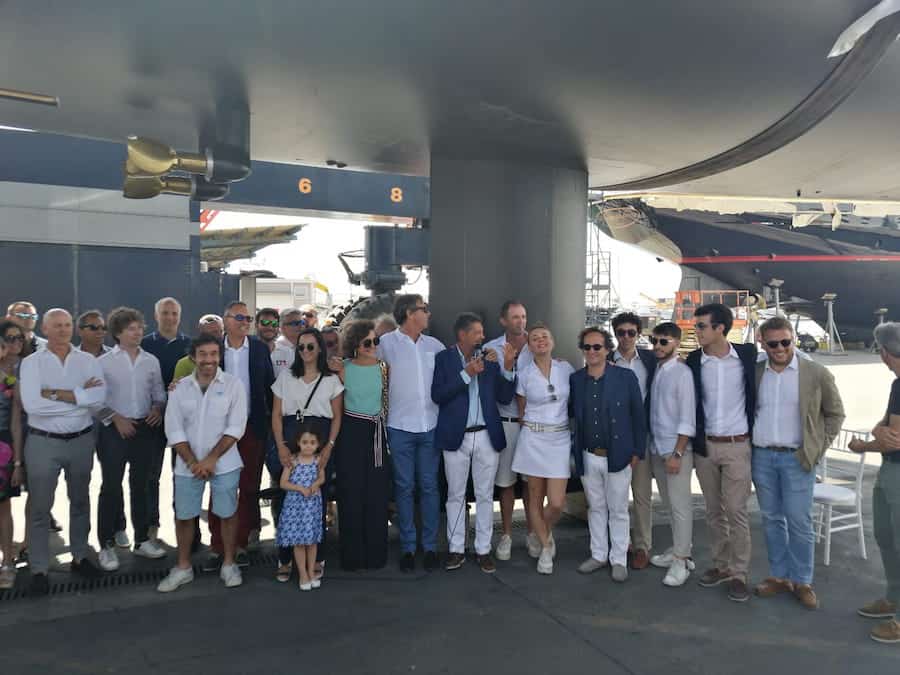 Lucio Micheletti of Micheletti + Partners took care of the deck and interior design: the hand of the Canova‘s designer can be seen. It can be perceived in the deckhouse with its streamlined, slightly curved glazed step, which ‘transforms’ into the handrails as it runs aft.

And in the large cockpit, which is divided into two areas with a double L-shaped sofa and two large fold-down dining tables for eating al fresco: “At least 14 people can sit here in total comfort,” says Micheletti. “We started from the concept of silent luxury. We worked on the essentiality of the shapes and the owner followed us. We lowered the broadside with a ‘batten’, we cut the stern.” 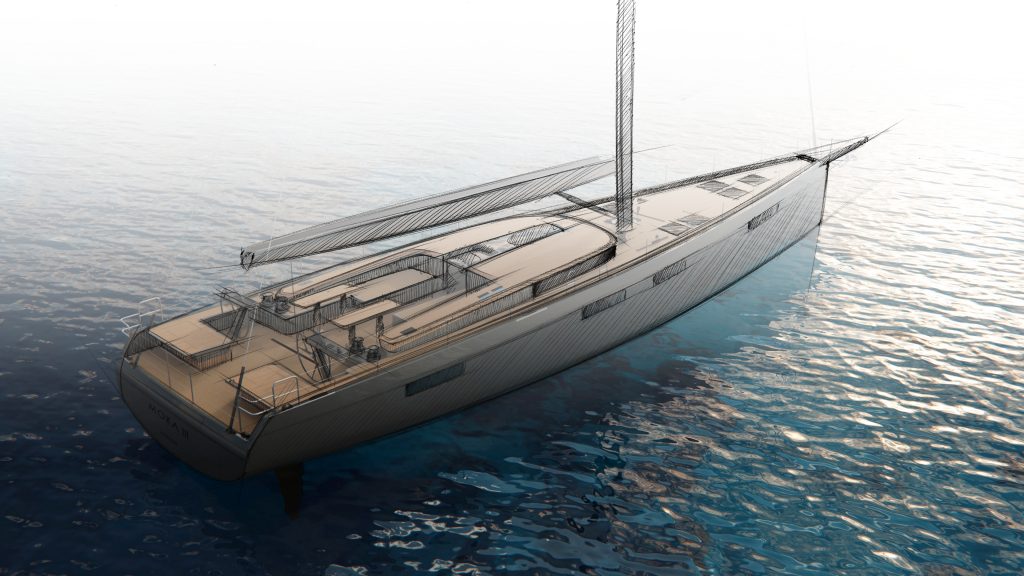 The double wheelhouse has been supplemented by comfortable sunbathing seats designed for long cruises. 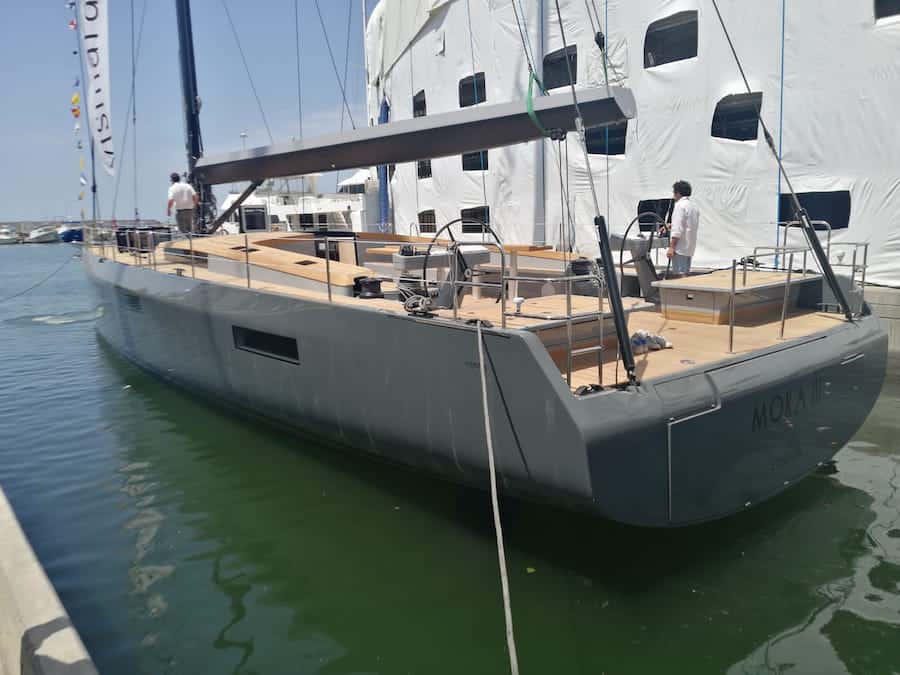 A large, electrically-opening hatch has been mounted on the transom, which can accommodate a tender of no less than 3 m in length, and also serves as a bathing platform for when you are comfortably stationary at anchor. 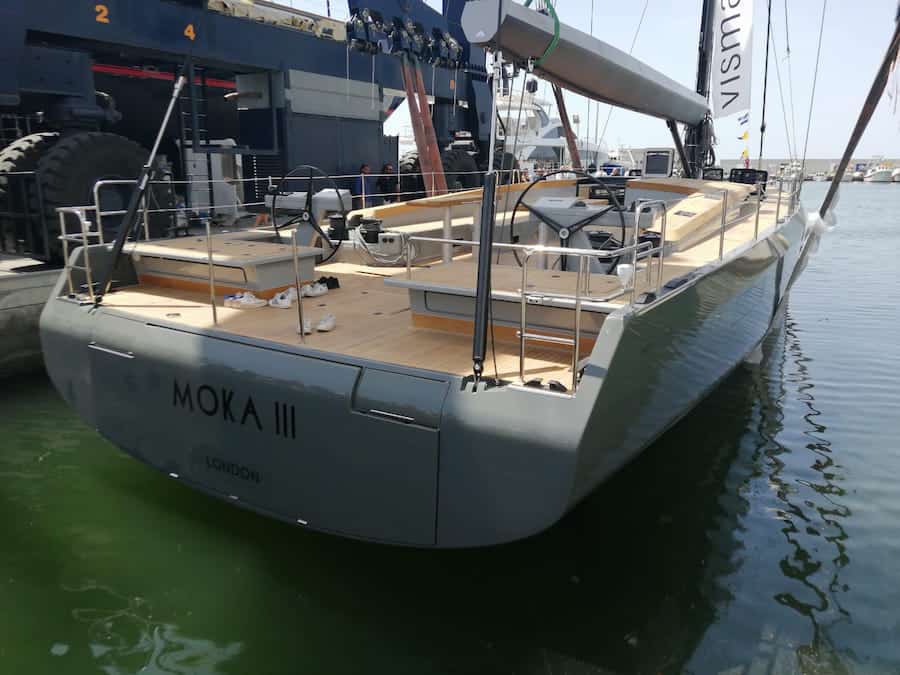 The shell of the new Vismara VM 80 (an evolution of the MoMi 80: not surprisingly, the boat’s co-owner Nicola Minardi was also present at the launch) is made entirely of carbon sandwich, the deck is covered in teak. The mast and boom housing the furling mainsail are also made of carbon. 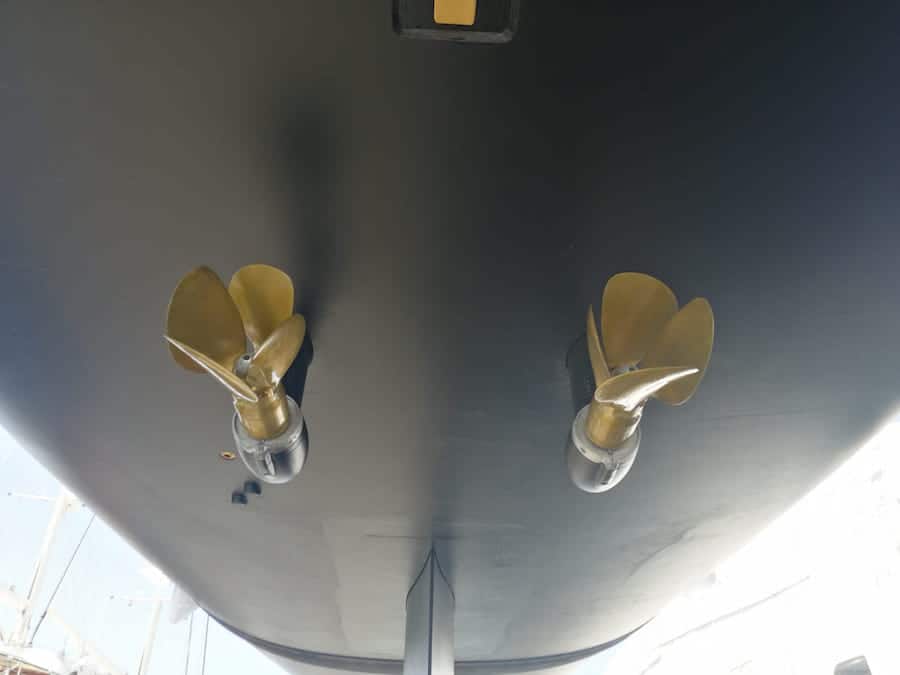 Looking at the photo of the boat ready for launching, one notices the double rudder blade and the twin 120 hp sail drive engines. But above all the imposing retractable keel, with a draught varying from 2.50 to 4 metres. 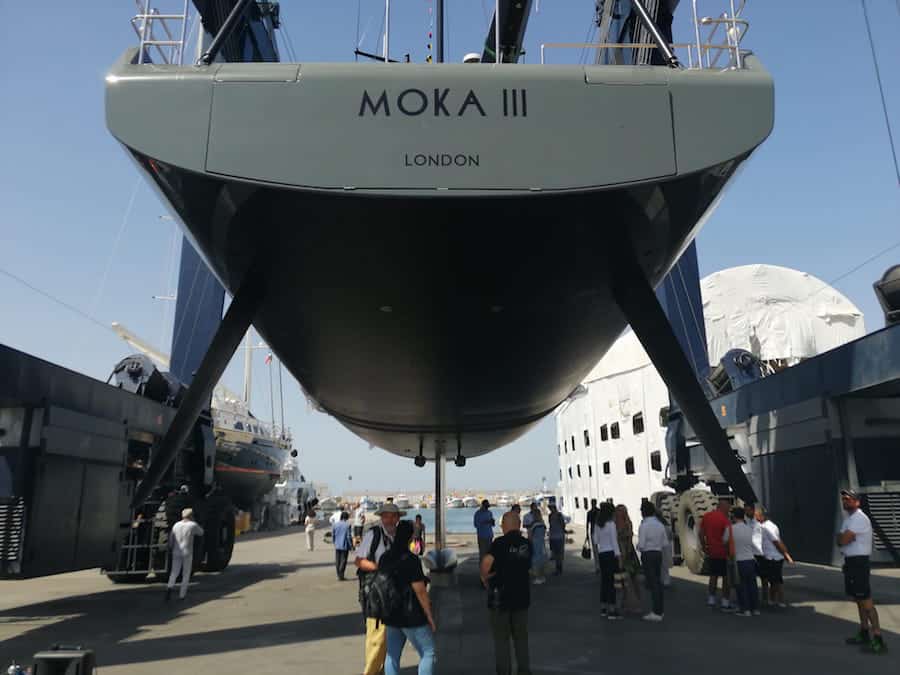 Below deck, where light oak is the dominant feature, it feels like being in a real luxury flat. Horizontal lines are the leitmotif of the interior layout. The natural lighting is excellent, thanks to the large hull and deckhouse windows that allow a 180° view. All the rooms are then ventilated from the outside through the various tambours positioned on deck. 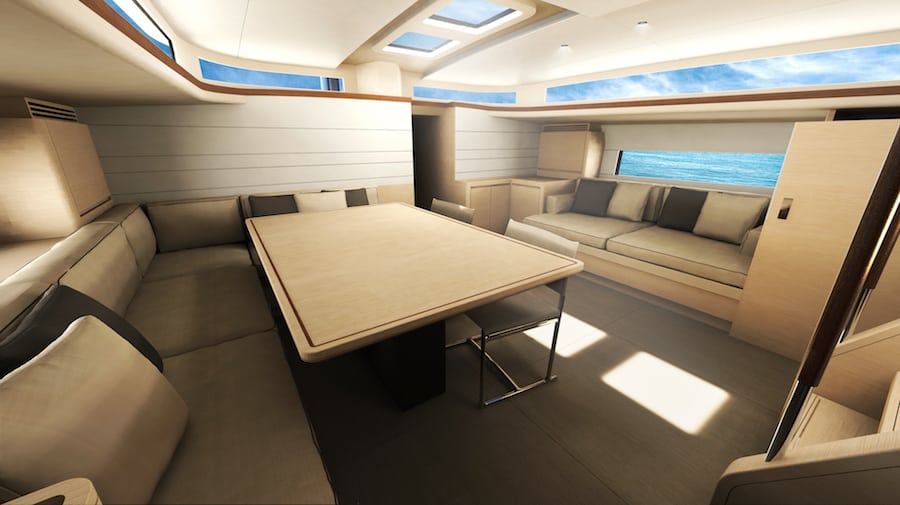 Going down the stairs there is a large dinette (below which is the engine room, which is perfectly soundproofed) with an L-shaped sofa and table on the port side; to the right is a second sofa, TV and chart table.

Towards the stern, on the right-hand side next to the sofa is the galley, consisting of a tilting gas hob, fridge, oven, dishwasher, sink and large countertop. Continuing after the galley is the crew cabin: bunk bed, wardrobe and private head with shower.

On the opposite side is a guest cabin with double bed, large wardrobe and head with shower. Here Micheletti has come up with an interesting solution. By folding down one floor, the cabin is easily converted from a double to a twin with separate beds and a small central ‘corridor’.

Going up towards the bow, past the dinette, there are two guest cabins on either side: one with a bunk bed, and the other a double bed, both with their own wardrobe and private head. 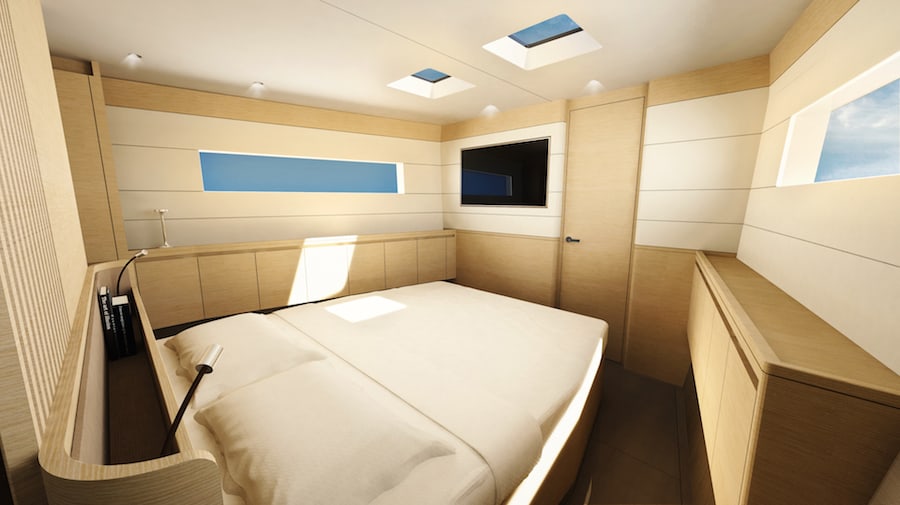 In the far bow, a large master cabin: a double island bed “tapered” towards the bow (this solution increases the impression of space in the cabin), double wardrobe and large head with shower and double sink.

Precisely because the owner wants to use the boat in total comfort, together with his wife, two air-conditioning and heating systems have been designed so that the boat can be enjoyed in both summer and winter.