Interview with the wind: how it affects a boat, where it comes from and how it manifests itself

The installation you see above is called Peine del Viento (Wind Comb): it is the work of Eduardo Chillida, dedicated to the wind. It is located on the cliffs of San Sebastian, Spain, directly overlooking the Bay of Biscay. Here the Mistral is strong. When it blows through the sculptures you can hear a sound, a music, and the show is assured. The wind. Are you sure you know everything about it? In this “interview”, we reveal all the secrets of this unpredictable and fascinating force of nature.

Interview with the wind

WHAT DOES THE WIND COME FROM?

Wind is basically moving air that moves through the atmosphere between two areas of different pressure. The air runs from the point of highest pressure to the point of lowest pressure, in a horizontal direction. The intensity of the wind depends on the distance between two points and the difference in pressure between them. In this situation, a force known as the gradient or pressure gradient is created. Physically, a gradient is the pressure exerted on each point in the atmosphere by the weight of the air column above it.

Atmospheric pressure decreases with increasing height and this also occurs on a smaller scale, i.e. on the ground. The wind that we perceive is due to the gradient force (or pressure gradient) that is generated between two points at different pressures and that acts on the air mass in an attempt to re-establish a balance between the points at higher and lower pressure. On a synoptic chart, where lines at the same pressure (isobars) are marked, this buoyancy corresponds to the difference in pressure values between two isobars: the greater this value, the stronger the air buoyancy will be; the intensity of the wind will be given by the distance between the two lines.

Think of a mountain seen from above. Imagine sectioning it with parallel planes, each 100 metres apart from the next, from the top to the bottom. Looking at it from above, closed lines will be defined: the points where two or more lines are closer together will correspond to the steepest parts of the mountain. Similarly, on a synoptic chart, two closer isobar lines will correspond to areas of higher wind. This is correct reasoning but remains theoretical. On the practical side, air friction on the ground and the orography of the coast must be considered. These are essential variables for understanding how and where the wind comes from.

WHAT AFFECTS WIND DIRECTION?
Since pressure originates from the variation of the earth’s temperature, wind – which originates from a difference in pressure – also depends on temperature. In an absolute way, you could say that the warm wind moves from the equator towards the North and South poles and the cold air in the opposite way. In reality, the air does not move directly along the line of action of the pressure gradient. Its displacement undergoes a deviation due to the rotation of the earth on its axis (which generates a force, called the Coriolis force). Simplistically, one could say that the wind from the equator to the North Pole moves east, while the wind towards the South Pole moves west. The wind is always defined by the direction from which it comes.

WHAT IS THE CORIOLIS FORCE?
It is a force due to the effect of rotation of the earth from West to East West that causes the wind to move to the right of the direction of motion if we are in the Northern hemisphere, and to the left if we are in the Southern hemisphere. It is the cause of air displacement in low and high pressures. Along the low pressure lines in the northern hemisphere the winds move anticlockwise, along the high pressure lines they move clockwise. The opposite is true in the Southern Hemisphere.

WHAT IS THE DIFFERENCE BETWEEN AERODYNAMIC FORCE AND HYDRODYNAMIC FORCE?
Understanding what these two forces involve means understanding the motion of a sailing boat. Starting from a situation in which there is no wind and the wind increases, imagine a sailing boat with the mainsail hoisted practically stationary. As the air increases, the boat moves and shifts sideways due to the aerodynamic force. The displacement of the hull immersed in the water in turn generates a hydrodynamic force. The resultant of these two forces is a new force, known as the forward force, directed towards the bow of the boat. The boat is accelerating until the two forces become equal and opposite, after which the speed becomes constant.

WHAT IS MEANT BY TRUE WIND AND APPARENT WIND?
The true wind is the wind that actually blows in the air and that you feel when you are standing still. On a moving boat, the wind that we perceive, called apparent wind, has a different direction and intensity than the wind that we perceive when stationary: it is given by the vector result between the real wind and the boat’s forward wind. The apparent wind has an intensity equal to the speed of the boat and a direction opposite to the direction of travel. When adjusting sails, the apparent wind is the only one to consider: as a rule, you can remember that its direction is always narrower than the true wind. To understand this, try carrying the spinnaker in a light wind. As soon as you accelerate, the sail is set and the boat increases speed. You will notice that, leaving the sail setting and the course unchanged, the upwind fall of the spinnaker will start to make an ear. This happens because as you accelerate the apparent wind increases and its direction “turns” towards the bow, so your angle with the wind is narrower. What to do then? You must adjust the sail according to the direction of the apparent wind, so either haul the sheet or spread the spinnaker, or lean back slightly.

HOW DOES A BOAT GO UPWIND?
First of all, it should be pointed out that boats don’t go upwind, but upwind, tightening the wind as much as possible and zigzagging. The reason why they manage to sail in this way is due to a number of factors. The first is a physical law, Bernoulli’s (related to lift). It explains that when a fluid (the wind) hits a curved surface (the sail) it behaves differently on the two sides. On the upwind side, it will slide at low speed and create high pressure, on the downwind side the opposite, faster and with low pressure. These components cause the so-called lift of the sail. The second component that is useful for lift is the Venturi effect, according to which a fluid increases its speed if it is led into a narrower channel. In the case of a boat, the channel is the one between the mainsail and the jib. The last component to consider for the boat’s progress is the drift and its resistance to hydrodynamic thrust. together, these three physical laws allow the boat to sail upwind. 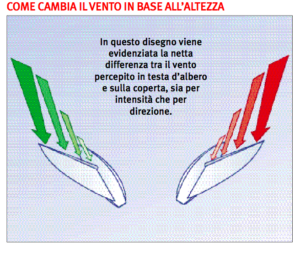 HOW DOES THE WIND CHANGE WITH HEIGHT?
When the wind blows close to the surface of the water, its intensity is reduced due to the resistance encountered. The direction and intensity of the wind change with altitude and this phenomenon is called wind sheer. As can be seen in the figure opposite, the length and direction of the wind vector varies depending on the height above ground.

WHAT IS THE SAIL LIFT?
The term lift comes from the world of aeronautics. An aeroplane is able to stay in the air thanks to the lift generated by the wing against its weight. Lift is not an abstract force. When you put your hand out the window in the car, you will feel a force in the direction of your hand’s tilt. As you change its incidence you will notice a change in force. The same thing happens in a boat. When the hull is sailing at a tight angle, the sails are like the hand or wing of an aircraft: they create lift.

WHAT IS A DOWNWIND?
It is a current of air that, after passing over mountain ranges, descends into the valleys below, bringing a rise in temperature and clear skies. The mountains create an obstacle (Stau wall) for the currents coming from the north. The clouds are blocked and the air passing over the mountain range becomes very dry: there are often considerable temperature differences between the two valleys separated by the Alps. The air is clear and humidity is very low. Falling winds from the northern quadrants, therefore, can bring temporary conditions of clear skies and rising temperatures, while waiting for the cold air mass that follows them, which leads to a lowering of temperatures while maintaining the dry climate.

WHAT ARE THE POLARS OF A BOAT?
They are graphs indicating the speed a boat can reach on a given course, in conditions of constant wind strength and direction.

Daily interviews, boat trials, webinars. All about sailing, minute by minute. But in video! CLICK HERE to subscribe, it’s free!

PrevPreviousMAN OVERBOARD. How to save him
NextSpace-saving accessories. From furling boat hook to universal handleNext
In evidenza 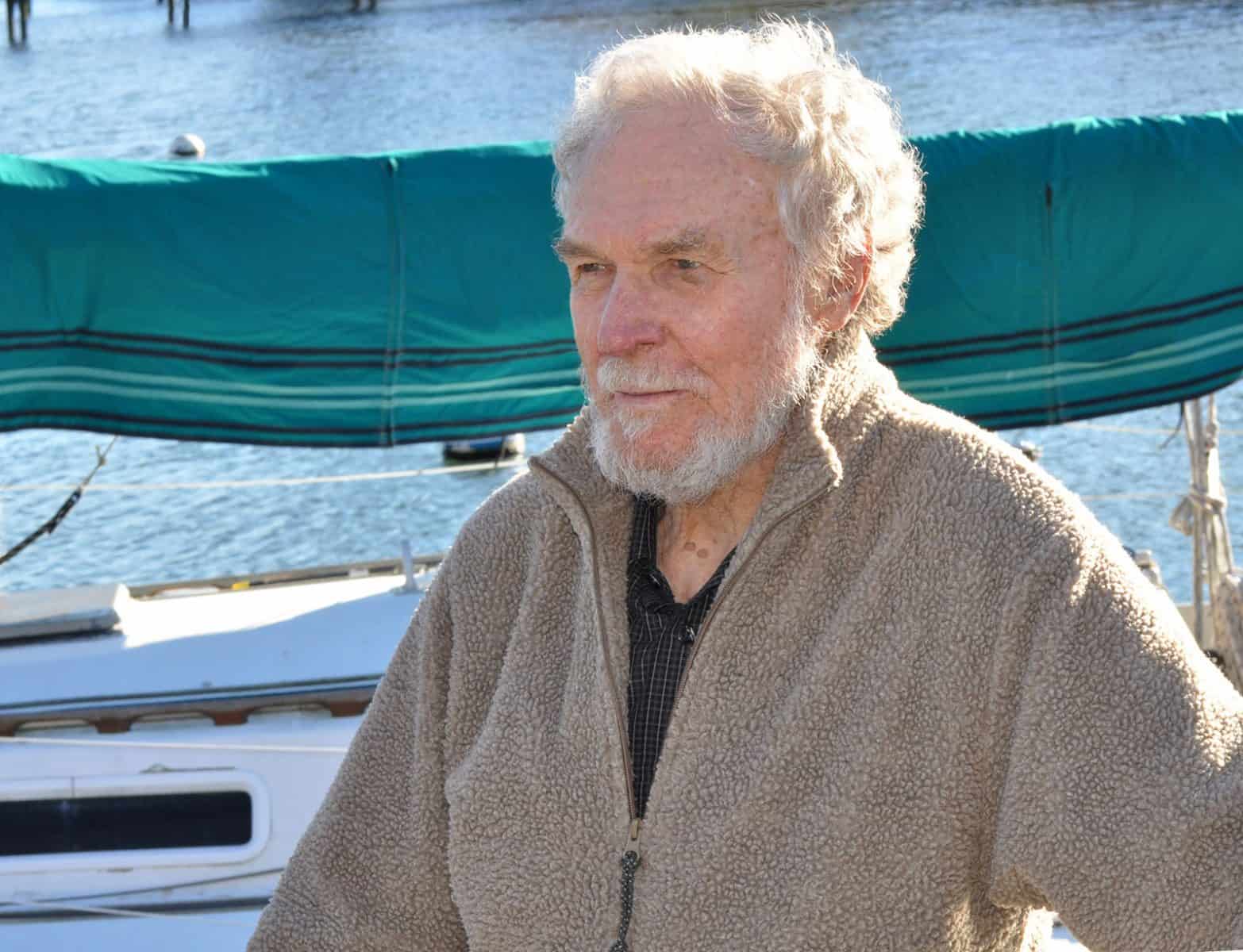 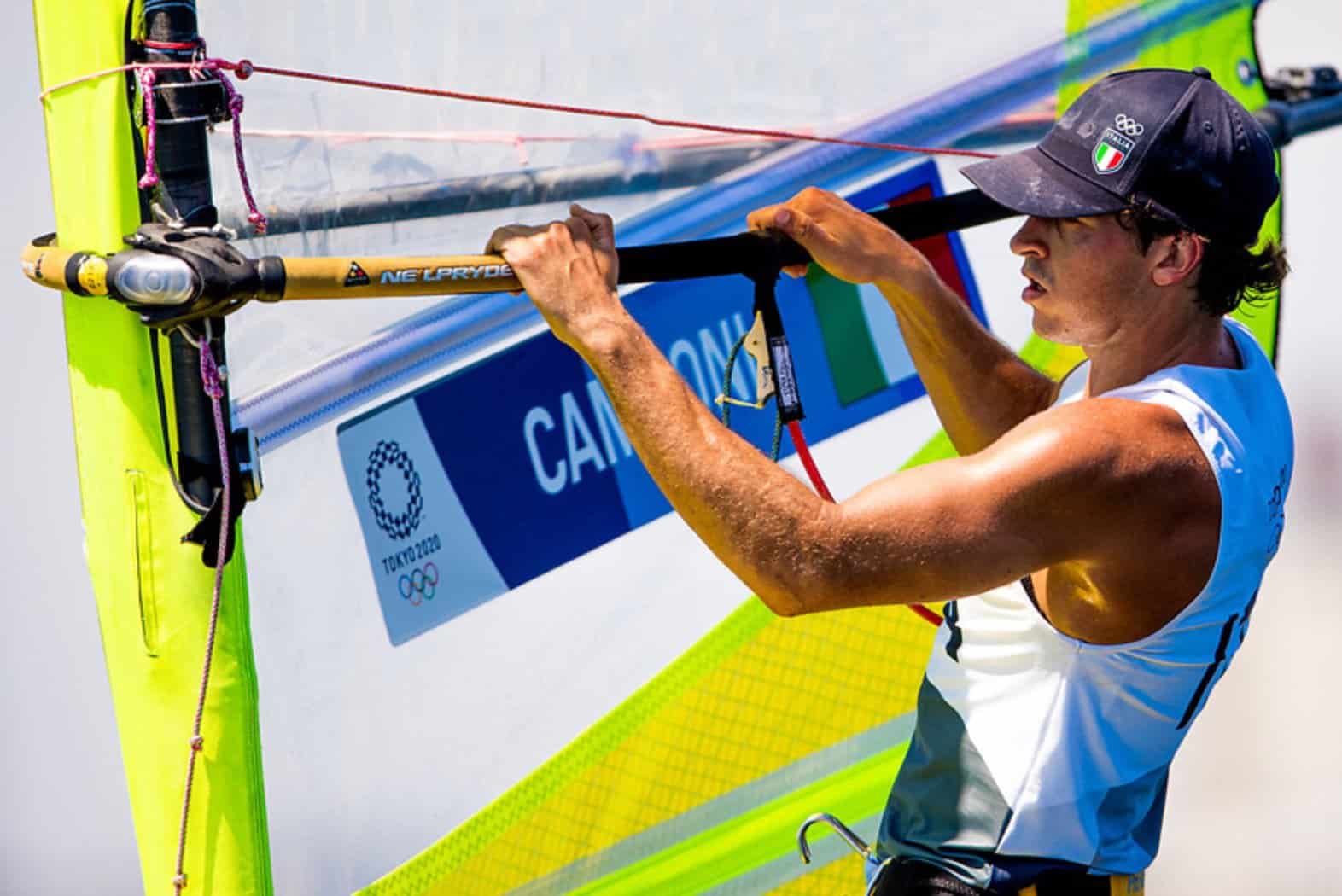 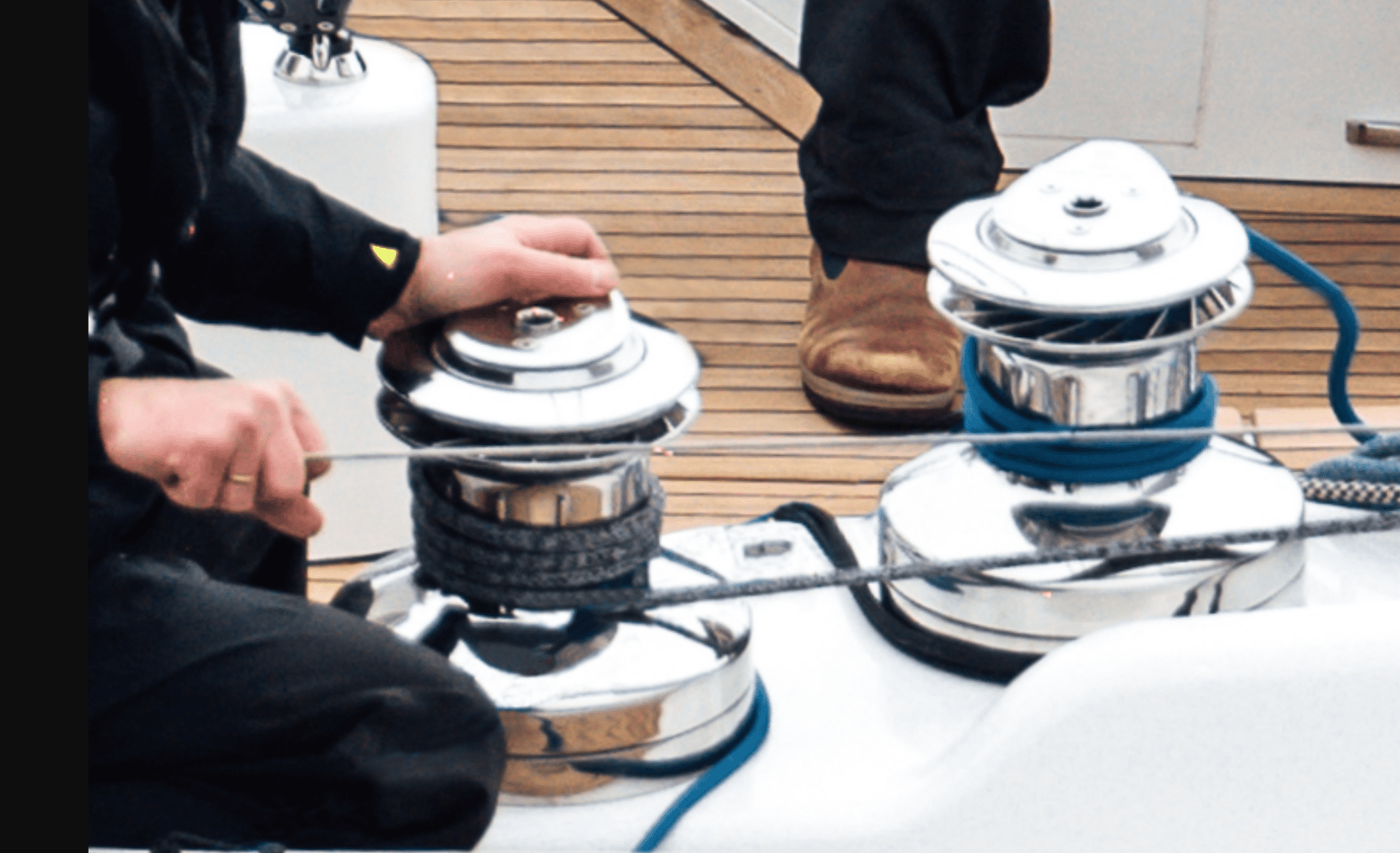 ELECTRIC WINCHES There is a lot of talk about easy sailing, but have you ever tried to caulk the sheet of a genoa on a cruising boat in 20 knots? Or hoisting the mainsail without anyone’s help when sailing with 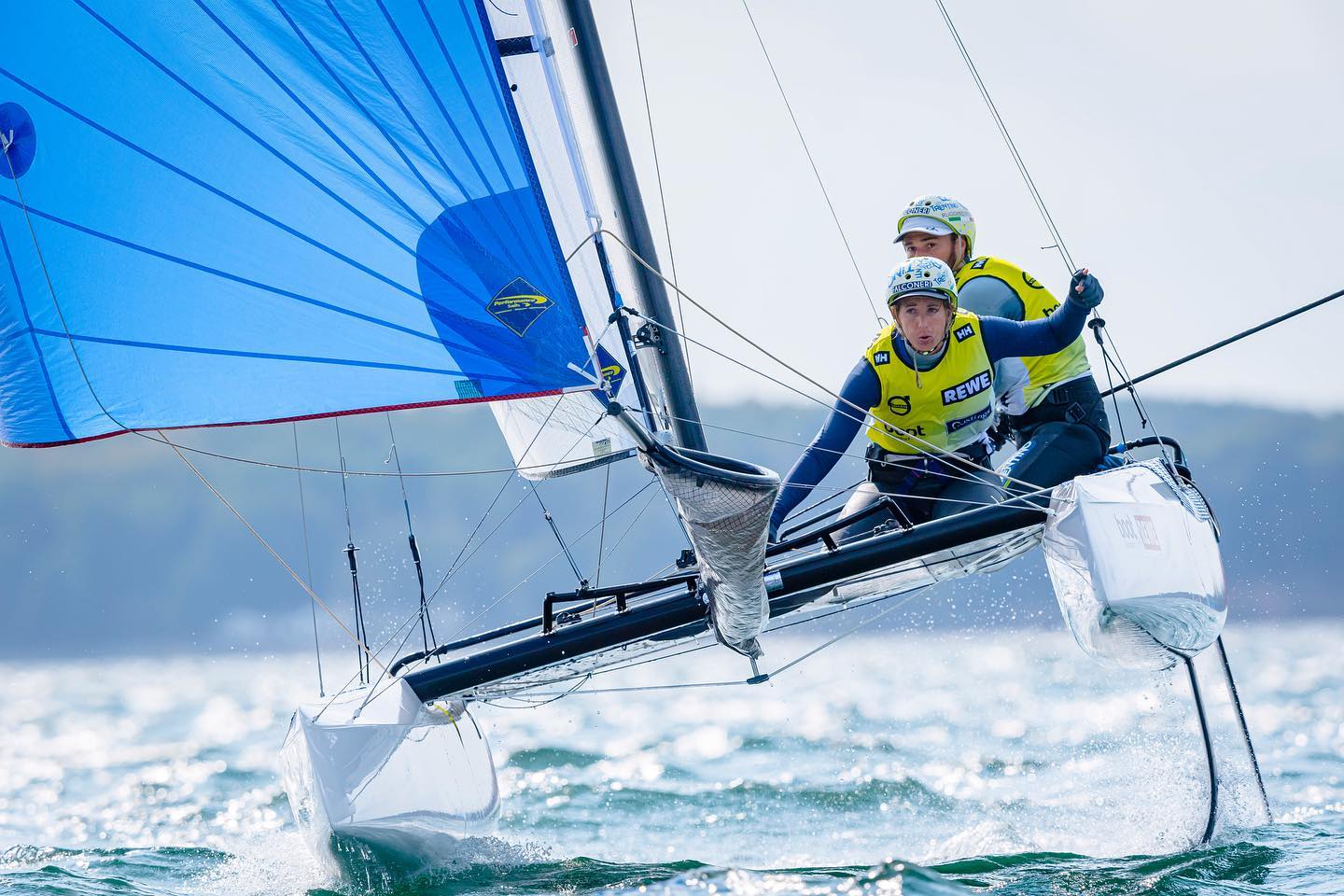