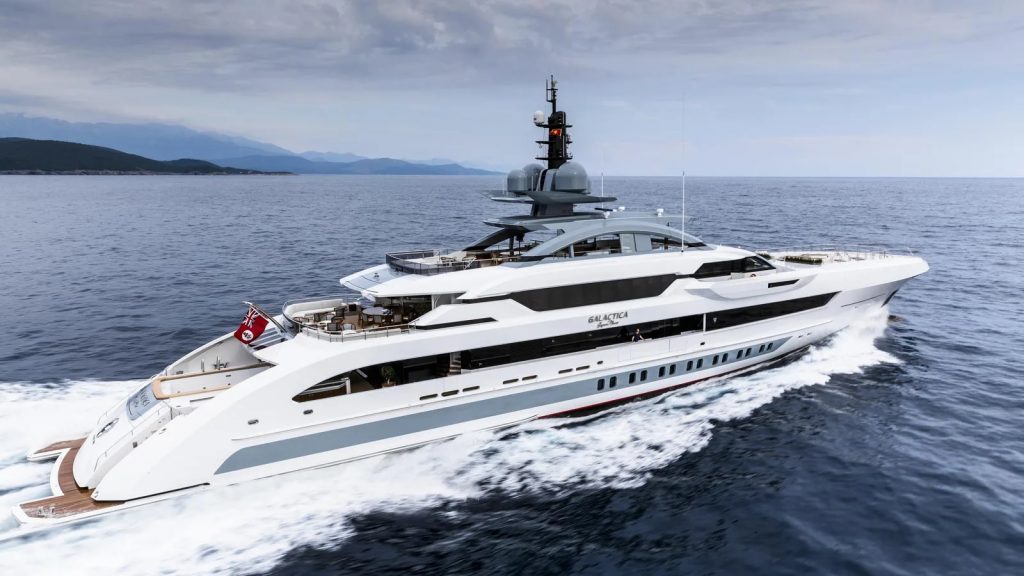 In recent days, with the news of the sanctions imposed on the Russian oligarchs, it has emerged the incredible fleet present in the seas of the world that belongs to the circle of entrepreneurs close to the Russian leader Vladimir Putin. A fleet with a total value of around 10 billion dollars. Almost 50% of this figure is in the hands of just three oligarchs: Abramovich, Usmanov and Melnichenko. The Russian oligarchs’ yachts are extremely luxurious, equipped with all kinds of entertainment, communication and security systems. They are veritable floating cities which, all in all, employ an average of around 5000 crew members.

These superyachts, owned by the Russian oligarchs, are either forcibly moored as they are seized or sailing to safe harbours, especially after the United States and its allies prepared sanctions on their properties following the invasion of Ukraine.

Below we look at some of the key players in the European sanctions, including those that have been seized in Italy.

The 9 superyachts of the Russian oligarchs

According to the Financial Times, Russia has about 800 billion dollars of economic resources, half of which are abroad. So the country, the citizens, can count on a state with assets of around 400 billion dollars. If we read the names of some of these ‘monstrous jewels of the sea’, we understand how economic hegemony is concentrated in the hands of a few. The Russian oligarchs featured in this article alone (with the exception of Putin) have assets estimated by Forbes to be close to $150 billion.

These few are precisely men close to Putin who have been able to properly exploit the country’s main resources: raw materials and energy resources. After years of prosperity, these oligarchs could now see their assets drastically reduced, precisely because of the sanctions that will be implemented by member states on assets, including superyachts. Some of them, following Russia’s invasion of Ukraine, are beginning to rebel and are clamouring for an end to hostilities. 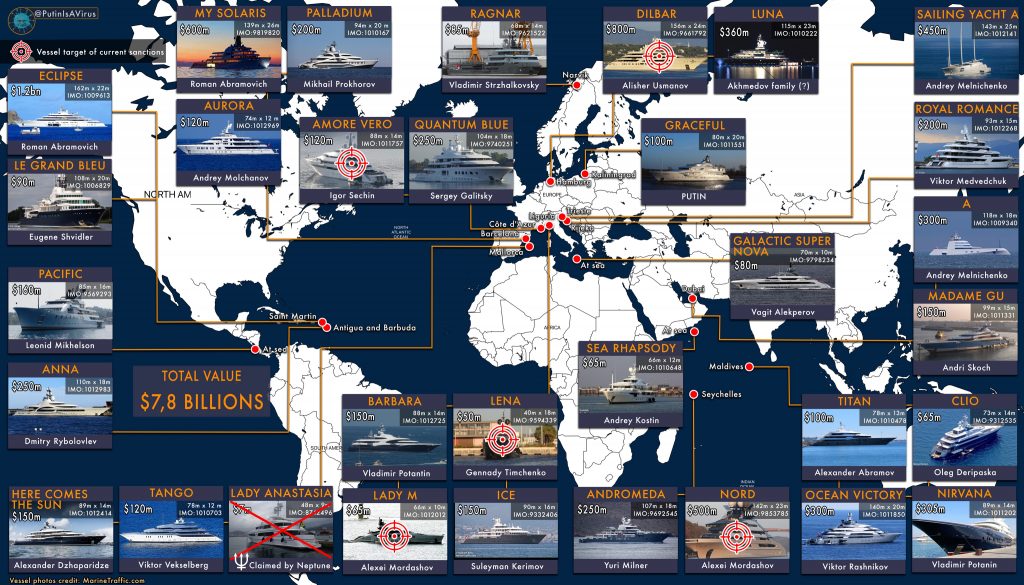 Data examined by International Marine Traffic show that at least four superyachts owned by Russian business leaders have moved to Montenegro and the Maldives in recent hours. This followed the announced and extensive series of sanctions.

The fleet has been summarised in a graphic published by the Twitter account @PutinIsAVirus. This account is meticulously updating the geographical positioning of the oligarchs’ superyachts. Some of them are also in Italy, since our country is not only famous for its coastline but is also a leader in the construction and maintenance of these yachts.

52-metre superyacht with an estimated value of 65 million dollars

The yacht moored in Imperia is owned by Alexei Mordashov, president of Severstal and whose family is considered the richest in Russia and whose name appears on the European Union’s black list. Mordashov is a businessman and the main shareholder and chairman of Severstal, a Russian conglomerate with interests in metallurgical, energy and mining companies.

52-metre superyacht with an estimated value of 50 million dollars

It is possible that the same fate could befall this yacht moored at Portosole in Sanremo, owned by Gennady Timchenko, owner of Volga Group, a 30-year friend of Putin’s and considered, according to a recent Forbes survey, the sixth richest man in Russia.


Alisher Burkhanovich Usmanov is a metal entrepreneur of Uzbek origin who, according to Bloomberg, has a net worth of $19.5 billion. His yacht DILBAR, the world’s largest by volume, was seized by German authorities in the port of Hamburg. The 512-foot yacht built in 2016 is one of the world’s largest superyachts. Usmanov issued a statement saying that the seizure decision is “unjust and defamatory”


The oligarch who has his permanent home in London is most famous for being the president of the Chelsea football club, a club that was sold to the Chelsea Foundation just hours before the activation of European sanctions. Of Ukrainian origin, Abramovich is among the protagonists in the negotiations between Russia and Ukraine. The businessman of Jewish origin has already declared that the proceeds from the sale of Chelsea will go to the families affected by the war.

His yacht MY SOLARIS has recently been seen in the waters off the port of Barcelona, before heading towards the port of Montenegro, where sanctions are not yet applicable. In fact, the long process of accession to the European Union, which began in 2011, will only complete its cycle in 2025. In contrast, the other yacht ECLPISE has been spotted in the Caribbean, but will most likely soon have another destination port.

Melnishenko is a Russian billionaire, owner of the world’s largest fertiliser company EuroChem Group and owner of the oil company SUEK. His yacht is probably more famous than he is as he often sails in Italian waters.

The superyacht was in the Fincantieri shipyards in Trieste for routine maintenance in recent days when it was was seized by the Italian authorities to enforce European sanctions. This oligarch is said to have a personal fortune of over $18b. In addition to the sailing yacht named A, he is also the owner of the $188m motor yacht A.

Vagit Alekperov, president of Lukoil, the largest oil company based in Russia, is sailing his yacht from Barcelona to Montenegro, where it is expected to arrive in the next few days, according to maritime traffic data. He is said to have lost 40% of his personal wealth, estimated at $20 billion, in the last seven days.

Outside this review, Vladimir Putin‘s 80-metre superyacht Gracefull, with an estimated value of $100 million.

The Russian president has a yacht that is “small” in size compared to his fellow oligarchs, but still equipped with all the safety features that increase its value. Putin’s superyacht left Hamburg earlier this month before completing its maintenance; according to German media, the Russian president did not stay in Germany because he was aware of the impact of the sanctions of the war he was about to unleash.

Daily interviews, boat trials, webinars. All about sailing, minute by minute. But in video! CLICK HERE to subscribe, it’s free!