TECHNIQUE How and where to mount a second forestay on board

If with a partially furled genoa, with only a few square meters of exposed canvas, one can sustain a load-bearing gait in 50 knots of wind, with the same reduced sail it is not conceivable to windward, albeit at wide angles. It is therefore necessary to arm a tormentor. (Cover image source: www.sailfeed.com)

And here arises the problem of where to infer it, since the forestay is already occupied by the furled genoa. Removing the latter means unwinding it completely, going to the bow, lowering it and then slipping it below deck to hoist the storm jib on the same channel as the furler, a job that in that wind becomes an unseaworthy endeavor.

The altenative is to either have a removable forestay on which to infer the new sail, or use one of the special tormentors to be attached directly over the furled genoa. 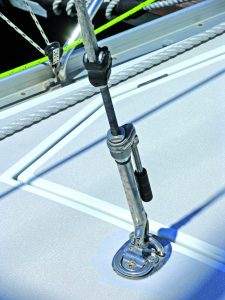 HOW AND WHERE TO MOUNT A SECOND FORESTAY

It is the most tried-and-true solution and the one that provides better balance at the rudder because of the sail’s rearmost position.

Here again there are two alternatives: Mount the removable forestay just below the forestay attachment on the mast (the distance should be no more than 60/70 cm) so as to avoid the use of flying shrouds; Or mount a false forestay (also called a forestay forestay) to be headed at the height of the high spreader, compulsorily bracing it with flying shrouds. In both cases, a textile (Spectra, Vectran or PBO) cable is recommended rather than a steel one, both for reasons of weight (the difference is 1:10) and handling, and not least to prevent the cable at rest along the shaft from damaging the anodization (or paint) of the shaft profile.

Tormenting is inferred on the forestay with special Velcro strings instead of metal garrocci. On deck you will obviously need a fixed point with double eyelets, ideally folding Wichard eyebolts, where you can attach both the removable forestay and the foresail tack. This fixed point must be imperatively returned below deck to a structural bulkhead or, by means of a stay, on the starboard bow. A turnbuckle with a pelican carabiner is used to attach the forestay to the fixed point, but a textile hoist with appropriate gearing can also be employed.

THE TWO SOLUTIONS FOR THE REMOVABLE FORESTAY