MAN OVERBOARD. How to save him 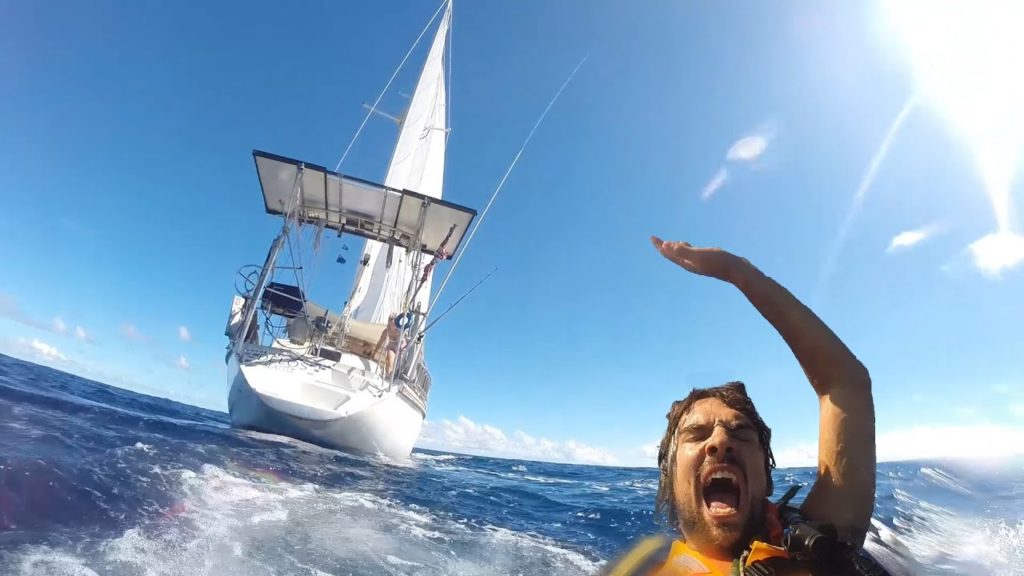 Together with oceanic sailor Sergio Frattaruolo, we have drawn up a scheme to face the worst emergency on board: the fall of a crew member overboard. Here’s what you have to do to save him (and the behaviors to follow if you were the one who ended up in the water).


What’s the worst emergency you can face on a boat? Sergio Frattaruolo, founder of the ocean navigation school Extreme Sail Academy, has not the slightest doubt: “It’s the fall of a man overboard while sailing: since it’s a sudden situation that has strong emotional repercussions, in order to manage it in the best possible way we must rely on a single procedure that is effective in all situations and not on ‘textbook’ maneuvers. Whether by day, night, fog or rough seas. This is the only way not to panic and worsen an already serious situation”. Here, in points the procedure to follow.

MAN OVERBOARD. WHAT TO DO

1. As soon as the fall occurs, make sure to fix the GPS position. On the chartplotter or on the manual GPS: in my opinion it is fundamental to have a portable one with MOB button like Garmin, even of old generation, in the cockpit within everyone’s reach. This will allow you to return to the position regardless of weather conditions: when we call an ambulance or the fire department, what do we give them first? The address!

2. Stop the boat as close as possible to where the accident occurred. With white sails it will be easier (put on the spinning hood), while if you are under spinnaker you will have to lay the sheets to lower it before putting on the hood. In the meantime, warn all the crew (with a keyword you should have established before setting sail, perhaps “Man Overboard” or “Man”) and get them all on deck: especially if the conditions are challenging, it is essential that they are all equipped with self-inflating jackets and tied to the jack-line. There is only one thing worse than one man overboard: two men overboard.

3. Launch the Mayday with VHF radio and Epirb. If you locate him and hoist him aboard, they’ll get there faster and take care of him in case of trauma. And if you can’t find him (as is the case in most cases, especially with wave), rescuers will have a better chance of locating him from the helicopter or lookout than you will. The automotive comparison fits like a glove: who would first try to treat a seriously injured person after an accident on their own before calling an ambulance?

4. Make sure there are no lines in the water and start the engine.

5. Lower everything (or keep the minimum of sails if your boat requires it) and motor up and approach in full control of the boat to the area where the man fell overboard, identified by GPS coordinates.

6. Approach the MOB location with the utmost caution: the boat poses a major hazard to humans at sea (tons of fiberglass or metal, drafty, no brakes, in a chaotic and unfamiliar environment). Reports are full of cases of people being run over and killed by rescuers. Instruct the crew to observe the surrounding body of water carefully: move at a knot and use extreme caution once you are at the GPS point. Especially if not too much time has elapsed since the accident, there is a high probability that the man overboard is very close to the boat.

8.Drop the man overboard recovery system (i.e. the floating rope attached to the boat with a lifebuoy: I recommend the Rescue Sling of Plastimo or similar) 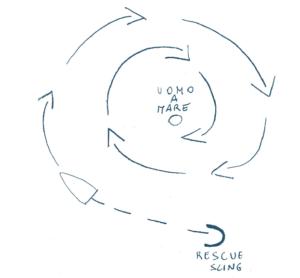 10. Keep at a distance, upwind, with the engine in neutral: haul the floating line to make the man approach the boat from downwind or aft, never upwind. To hoist the MOB in the boat there are several methods: on cruising boats and catamarans of last generation, boats equipped with aft platform, the most effective way is to hoist it from the stern, with the crew members sitting on the stern bridge (tied to the jackline) that pull up the man overboard with the help of the topping lift or the mainsail halyard.

11. Once you have hoisted him aboard, pay particular attention to trauma and shock, keep in mind that people often fall overboard after bombing, hitting, and facing the side. If the MOB has been at sea for a long time, leave him lying down and do not lift him to his feet, the heart may not have sufficient strength to pump blood to the brain. Also, if he is hypothermic, do not suddenly warm him up with the underdeck heater on full blast (the thermal shock could cause heart attacks) but let him gradually regain his body temperature.

12. If the man overboard is unconscious, to recover him a crew member must dive, obviously tied to a long line, with self-inflating jacket, mask, snorkel and possibly with a wetsuit (clothing and accessories that I recommend to always have on board) The rescuer must reach the unconscious man by swimming, recover the MOB, activate his self-inflatable. At this point the crew on board will rescue the rescuer and the MOB that will be hoisted on board with the help of the Rescue Sling. 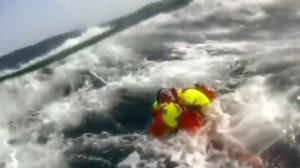 WHAT TO DO IF YOU ARE THE MAN OVERBOARD

In the unfortunate event that you are the one who falls into the sea and you have not taken a blow that has caused you to lose consciousness, you must, after activating all the tools at your disposal to be found (AIS MOB, PLB, LedFlare: I recommend that you always have them with you in your inflatable jacket) worry about staying afloat as long as possible and preserve your body temperature. Do not take off your clothes: contrary to popular belief, the more you are dressed in technical clothing (oilskins, dungarees…) the more you will float. Also, clothes create a warm water gap between your body and your surroundings, helping you to lose less heat. Don’t swim or shake – this will give you the feeling of warmth, but in reality your body will be dissipating heat. Since the inflatable vest will keep you afloat, curl up in a fetal position so that you expose as little body surface area as possible to the cold water. If the sea is rough, wear the hood of the life jacket, which will help you breathe, keep your back to the waves so as to avoid breathing water. Spend energy only signaling your position to the boat by waving and using your whistle.

ABOUT OUR EXPERT
Sergio Frattaruolo, from Bologna, class of 1969. In 2011 he crosses the Atlantic participating in the Mini Transat, in 2012 he is at the Global Ocean Race (around the world in double on Class 40). On the Class 40 Calaluna, he took part in the most important offshore races in the Mediterranean. In 2013, he founded in Lisbon the Extreme Sailing Academy: an offshore sailing school aimed at everyone. In 2015, together with his students, he conquered the record on the Discovery Route in the category up to 40 feet.

PrevPreviousHow to arm the boom restraint well (and avoid tragedy)
NextInterview with the wind: how it affects a boat, where it comes from and how it manifests itselfNext
In evidenza 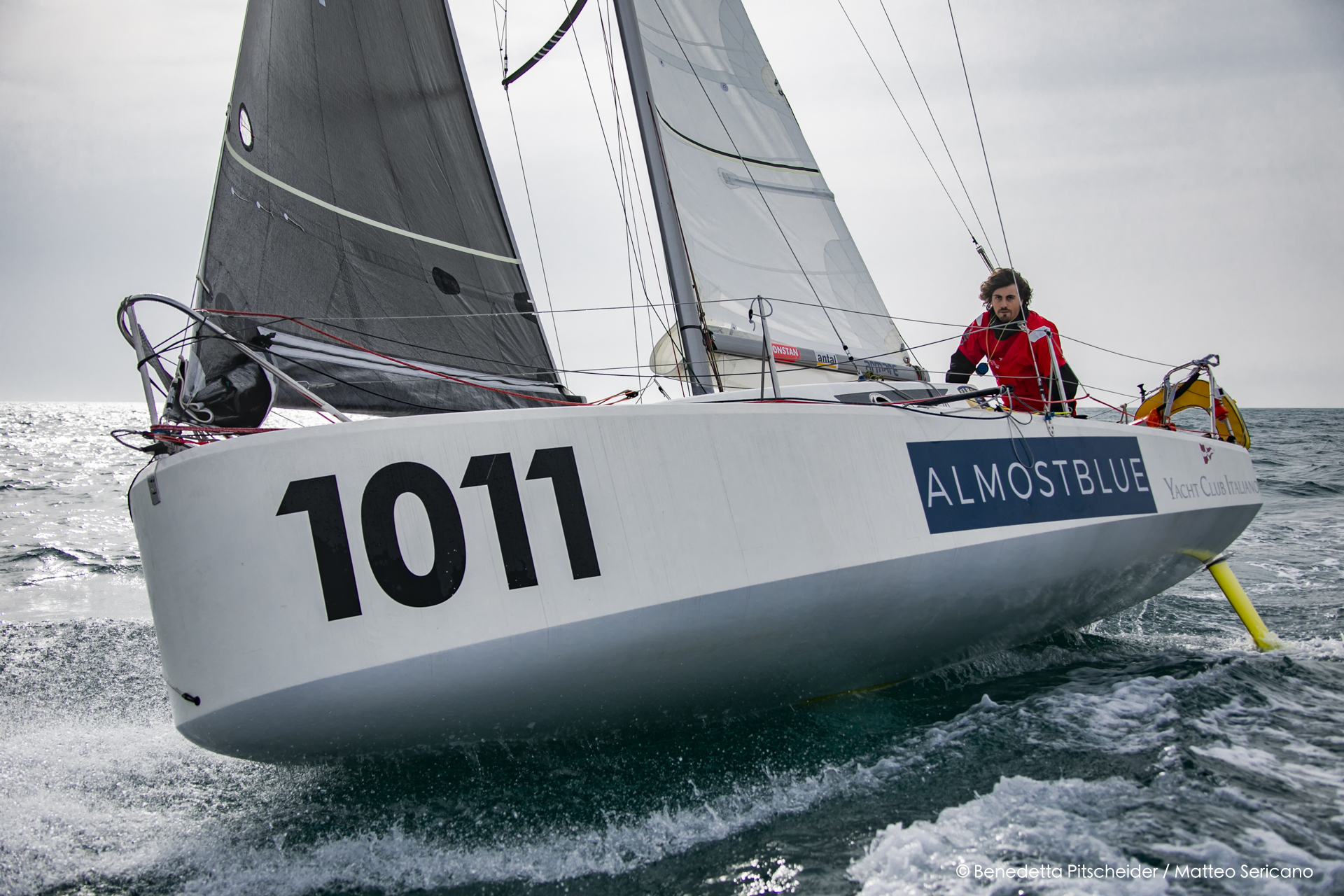