Patrizio Bertelli: all the boats of the collector of yachting history

A newborn myth, the Swan 78 reveals its secrets 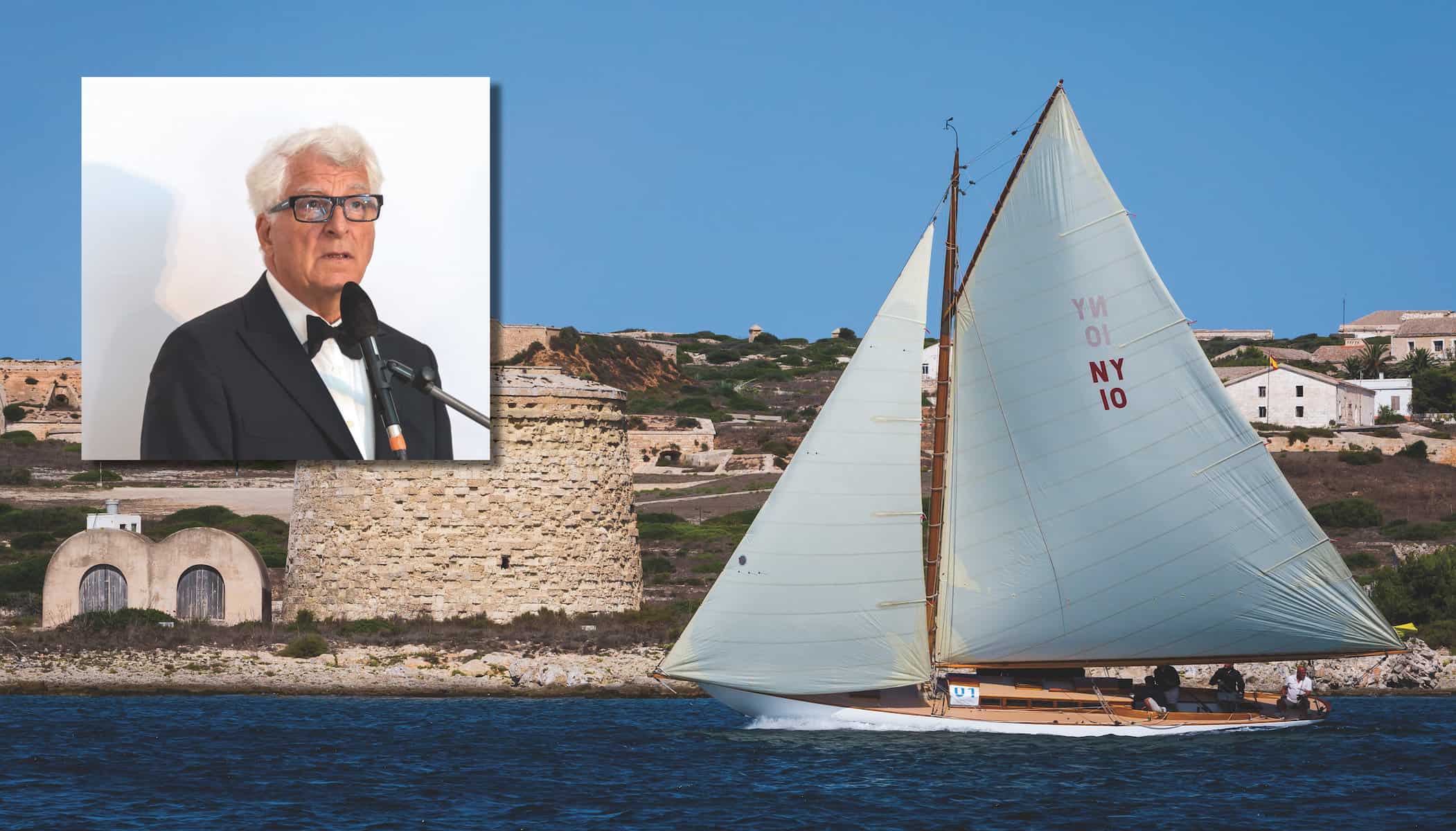 The world is full of beautiful stories of tycoons who are great collectors of paintings, sculptures, jewellery, vintage cars and precious objects. Some have museums in their name, like the legendary Peggy Guggenheim. There are those who go overboard, such as the Sultan of Brunei, who has the largest collection of cars, with 7,000 units.

Foundations are even set up to patronise unknown artists, such as the Louis Vuitton Foundation in Paris, owned by one of the world’s richest men, Bernard Arnault, or Miuccia and Patrizio Bertelli’s Prada Foundation in Milan.

But, strangely enough, collectors of iconic yachts are absent from the yachting world. Not even Gianni Agnelli, who had an immense passion for the sea and boats, became a collector of sailing works of art. More like he bought them and then resold them. Or he would give them away.

Luckily there is an Italian gentleman, the only one in the world today who can boast the title of collector of iconic sailboats.

He brings together, with philological and aesthetic passion, boats that are cornerstones of the glorious history of yachting, which can be traced back to 1660 when Charles of England commissioned 24 royal yachts for the sheer pleasure of sailing.

The Italian we are talking about has already been mentioned. His name is Patrizio Bertelli, he is the biggest collector of sailing yachts, as well as being the CEO of the luxury multinational Prada (around 3 billion in revenues) and the big boss of Team Luna Rossa, which has participated six times since 2000 in the world’s most prestigious and oldest regatta, the America’s Cup.

But this time we are not interested in talking about Luna Rossa’s exploits. We want to tell you the story of the extraordinary “Prada family” collection and its eight iconic boats. From the small 7-metre Tuscany Vispa, with which it won an Italian championship in 1975, to the old America’s Cup boats Nyala and Kookaburra, passing through its early 20th century jewels Linnet and Scud. And let’s not forget Vanessa, designed by the Italian genius Carcano in 1975, and the more “normal” boats he goes on holiday with, the two Ulysses, a classic Sangermani and Frers’ beautiful 105 Pedi from 2000.

One of the two works of art in Patrizio Bertelli’s collection designed by the Leonardo Da Vinci of sailing design, the American Nathanael Greene Herreshoff (1848-1938). 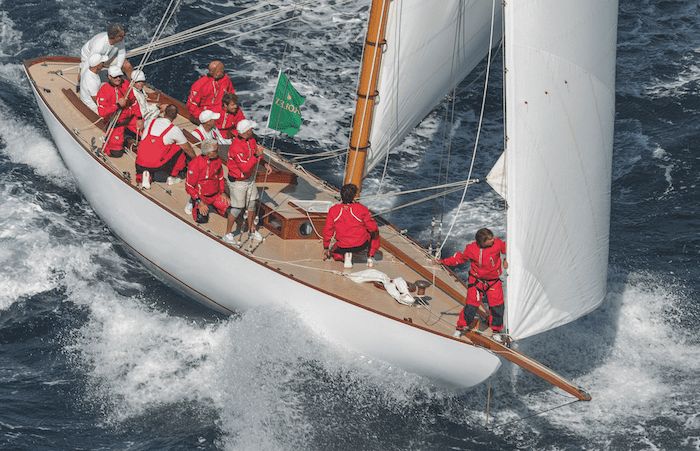 Patrizio Bertelli’s collection of boats/works of art should not be without a craft by Herreshoff, known as the wizard of Bristol, who was the real inventor of modern boats. It is enough to remember that he invented the fin with the ballast placed as low as possible. He revolutionized stability under sail. He also invented the first compensation system that allows boats of different sizes to compete for the final victory regardless of size. Scud is one of the most significant and successful jewels designed by Herreshoff.

It was the twelfth yacht launched by Herreshoff’s own yard in 1904 in a range of thirteen identical boats in the “Bar Harbor 31-footer” class, 14.80m long overall, 9.60m at waterline and 3.20m wide overall. This class was in 1903 the smallest cruising boat also capable of participating in club races. Scud is one of the most recent purchases by Patrizio Bertelli, who entrusted the philological restoration to Federico Nardi of the Cantiere Navale dell’Argentario. Scud won the Les Voiles de Saint Tropez category at the end of September 2021, with Brazilian superstar Torben Grael at the helm.

The second boat in Patrizio Bertelli’s collection is designed and built by Bristol Magician Nat Herreshoff. Linnet is the tenth of eighteen units of the New York 30 class, the first One Design class (identical boats) in history, designed by Herreshoff using his “Universal Rule” calculation system that assumes the theoretical performance of any sailing boat. 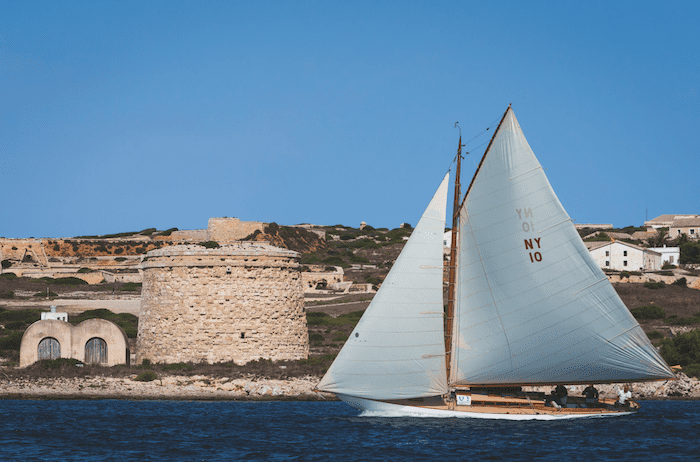 Linnet – with an overall length of 13.26 m, a waterline length of 9.10 m and a beam of 2.67 m – was created as a boat for members of the prestigious New York Yacht Club based in Newport (Rhode Island), famous for having been the scene of America’s Cup challenges for decades. Only 10 New York 30s are still sailing today, and Linnet, restored by the Cantiere Navale dell’Argentario, is one of the best preserved examples. She has belonged to Patrizio Bertelli since 1998 and has a rich palmares of victories in vintage boat rallies, such as the Copa del Rey in Majorca in 2017.

It is the boat that started the collection. Patrizio Bertelli bought her in the early 1990s and shortly afterwards, in 1997, he launched Luna Rossa’s first America’s Cup challenge. The history of this boat is curious. Although it was a 12 M SI, the class in which the America’s Cup was raced from 1958 to 1987, it never took part in the Cup, but only served as a sparring partner for the US boats in 1958, 1962 and 1964. 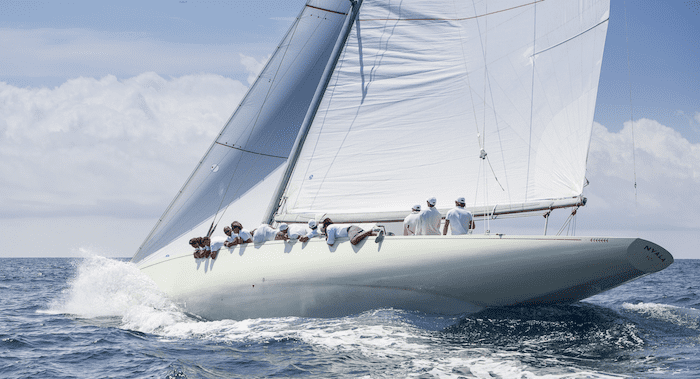 Nyala was beautiful and fast, designed by Olin Stephens, another essential designer in a collection of iconic yachts. Stephens was the magician of the 12m SI (21 metres long and 3.60 metres wide). Nyala had the misfortune to be born in 1938 for the 1941 edition of the America’s Cup, which never took place due to the outbreak of the Second World War. After the 1960s it was abandoned after going down in flames. She was reborn thanks to Patrizio Bertelli who brought her to Livorno where she was restored by the trusted Argentario yard in 1996.

Nyala was the boat that introduced Max Sirena to Patrizio Bertelli. Here’s what Sirena had to say: “In 1993 I was called to do a training session on his Nyala at the Argentario; I knew Bertelli’s name but I’d never met him and I didn’t know what he looked like. When I got back to port I could hear this loud voice on the dock, and I said to this gentleman: what are you shouting about? He said: Who are you? I replied, I’m Max Sirena. He replied: I’m Patrizio Bertelli, give me five minutes to figure out if I’m going to tell you to fuck off immediately or if we’ll see each other again”.

Thanks to Nyala, their association has lasted ever since. Nyala has been underestimated, revitalised by Bertelli and won the 2014 and 2019 12M SI World Championships with Mauro Pelaschier at the helm.

The name Ulisse distinguishes the two boats with which Patrizio Bertelli relaxes, using them for his boating holidays. The first Ulisse was built by Cantiere Sangermani of Lavagna, a historic name, to a design by Olin Stephens, the same designer as Nyala who, in addition to racing, was also the most popular designer of elegant, comfortable and fast boats for cruising and racing. 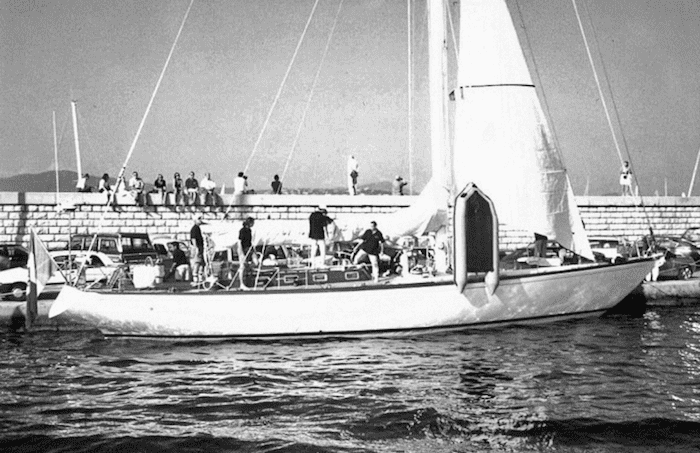 Mr. Bertelli elected the first Ulisse (19.90 m long and 4.98 m wide) as his holiday boat for years, mainly touring the Aeolian islands, where he has a house in Panarea.

A real gem in the Bertelli collection. Vanessa is a very special boat designed by another genius, this time an Italian one. Giulio Cesare Carcano is the designer of the legendary Moto Guzzi Falcone and V7 and lives in Mandello Lario on Lake Como. Of course he also likes sailing boats. After ‘tweaking’ existing boats, he realises that there is something wrong with the racing boats of the period. they all look the same, are heavy and slow. 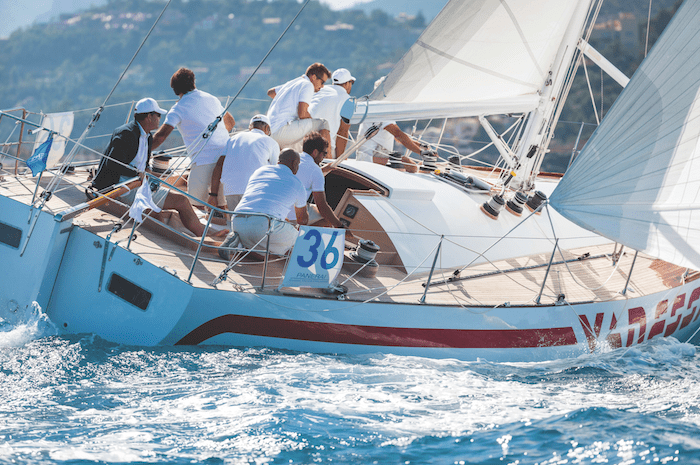 And he’s right! These are revolutionary boats that are lighter, wider at the stern and with a sail plan that mimics those of the Olympic classes. The result is that his boats go twice as fast in bolian and downwind conditions as his competitors of the same length.

That’s why Bertelli, a true connoisseur, fell in love with Carcano and, in 2000, rescued Vanessa, which was in a pitiful condition. Vanessa (15 metres long) racing in 2019 performed well at the Giraglia classic and the Regates Royale in Cannes.

It is certainly Patrizo Bertelli’s favourite boat. In 1975, Vasco Donnini, a well-known boat builder from Castiglione della Pescaia, salvaged a 7.50 cruiser for a small amount of money, named after the boat builder, CBS 7.50, designed by Aldo Renai. He took a saw and cut off the stern, lengthening it by a good metre. To save weight, he didn’t close it, but left it open on the cockpit. 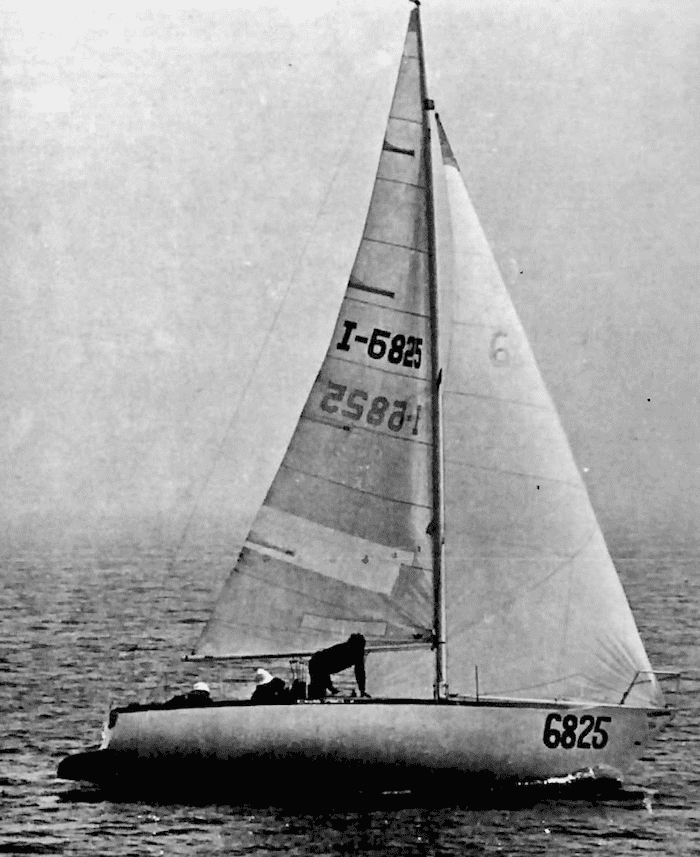 He also changed his mast and sail rig. It is said that he took the mast of a Soling and lengthened the jib. In 1975 Tuscany Vispa won the Italian Championship of the VI IOR class. To say she’s beautiful is a lie, but she’s very fast. On board was 30-year-old Patrizio Bertelli. He’s owned Tuscany Vispa ever since. He still races her every now and then.

An unknown Australian entrepreneur reached the 1987 America’s Cup final as the title defender. He built three boats with little difference between them. He challenged the American Kookaburra III, but by all accounts the fastest was the II. The one Bertelli bought in 1995. Beautiful. 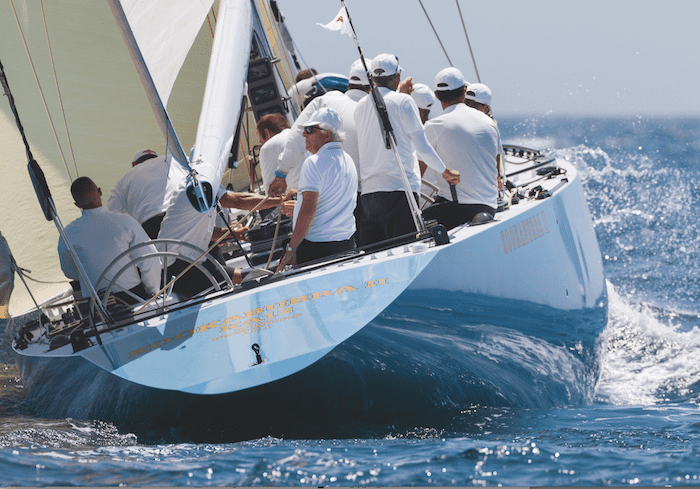 In 2019 Bertelli crossed the Atlantic with his friends, to arrive in Saint Lucia in the Caribbean with this wonderful 32-metre fast cruising yacht built by the Green Marine shipyard in 2000. The design of Ulysses is, coincidentally, by German Frers, the archistar, who designed Luna Rossa which reached the America’s Cup final, also in 2000. 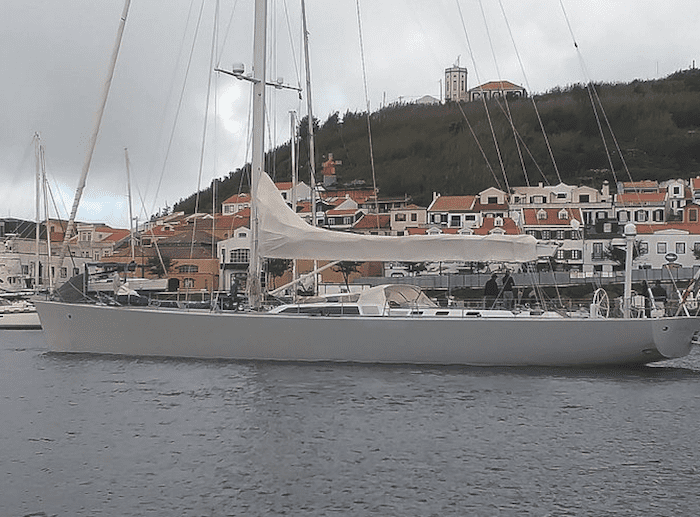 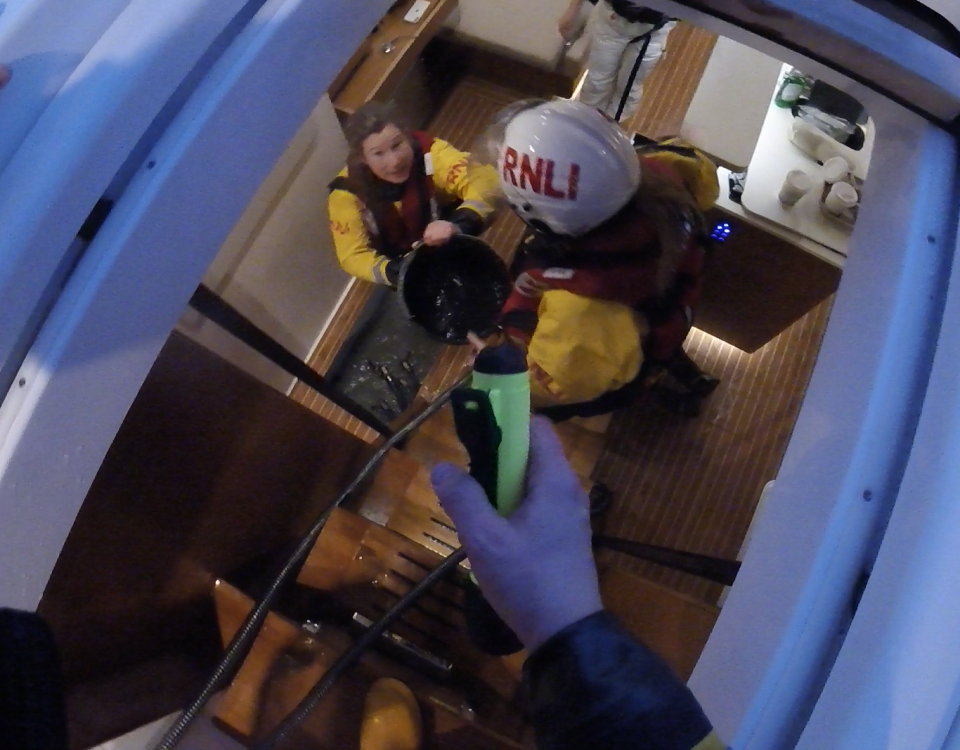 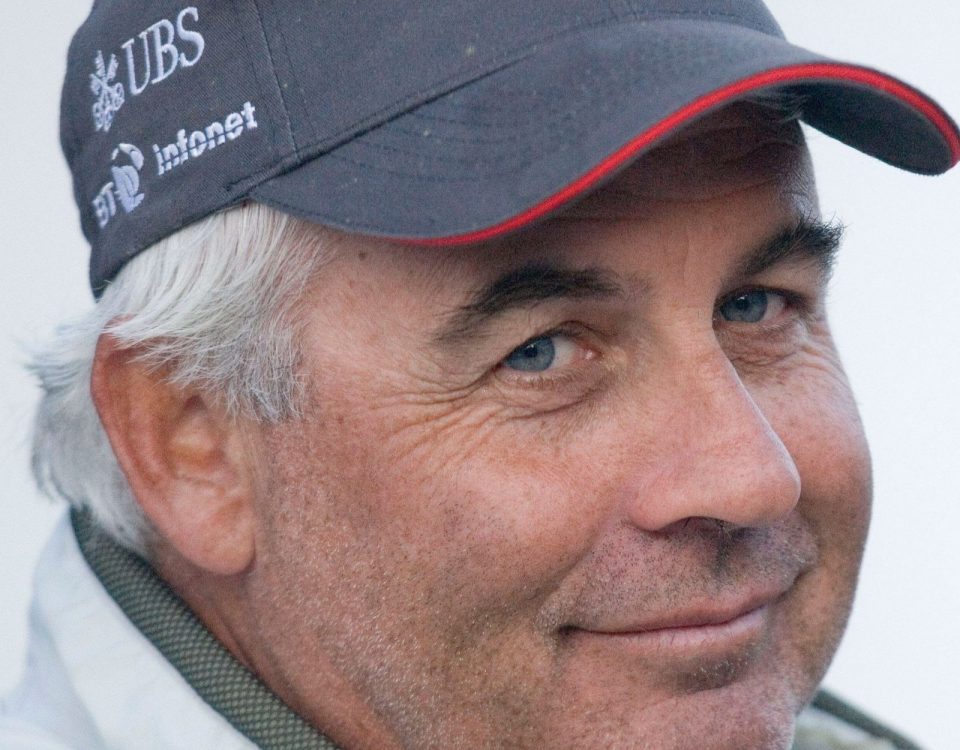 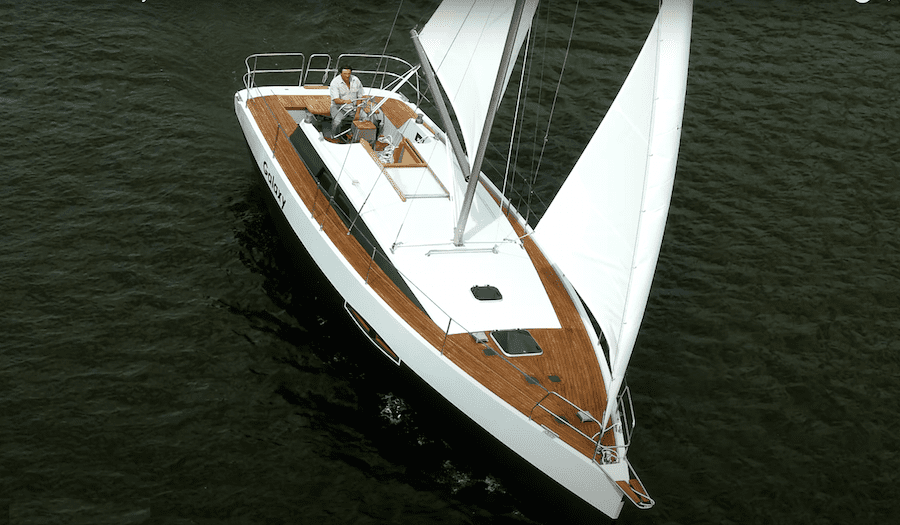