First 36 is the new 11-meter racer/cruiser by Beneteau

We gave you a preview of it HERE, but little or nothing was known about the First 36 at the time.

Now, finally, all the details have been released to understand what the successor to the First 36.7, one of Beneteau’s most successful models, will really look like.

This is a sailboat that, according to the boatyard, aims to combine the hi-tech world of racing with that of the traditional racer/cruiser. In its “standard” version, Beneteau promises, the First 36 (11.00 x 3.80 m) will be able to get on plane even in moderate breezes.

Speed will be guaranteed, but without betraying the spirit that has always characterized (and led to the success of) the First range: that is, the right mix of performance, comfort, elegance, navigational safety, quality construction and, above all, a reasonable price.

What are the key points that make all this possible? First and foremost, a low displacement (4,800 kg) to make planing easier; then a deck layout that has been studied down to the smallest detail so that even a small crew can handle the boat; a “smart” interior layout with three cabins and lots of clever solutions for cruising.

Beneteau First 36  – The design team behind the project

The design team is made up of real superstars: Kristian Hajnšek, CTO of Seascape (acquired by Beneteau and specialised in fast sportboats), as project manager, Sam Manuard (Class 40, IMOCA 60, Mini to name but a few of the classes for which he has designed masterpieces) for naval architecture, Lorenzo Argento – already engaged by Beneteau for the First Yacht 53 – as designer capable of giving that “Italian touch” to the boat and the Gigodesign team for innovation and research. 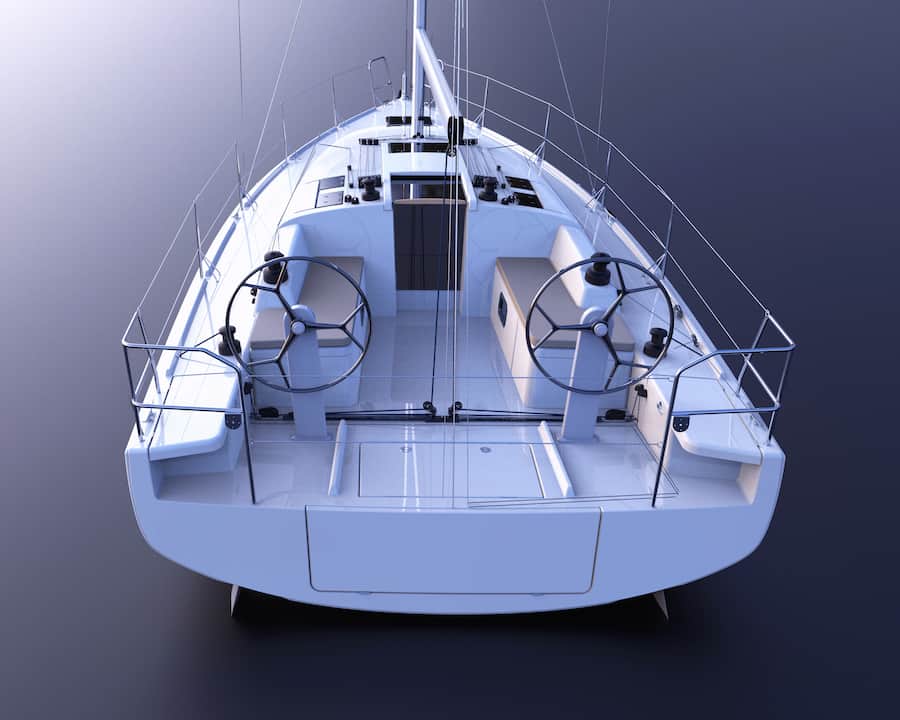 The positioning of the six winches on deck, the two rudder wheels and all the deck equipment has been carefully studied and tested on various mock-ups and a full-scale test boat. The cockpit benches are removable (a solution already seen on older Firsts) and create an open cockpit ideal for racing.

The standard aluminium rig and cast iron keel were chosen to keep the boat accessible. However, Sam Manuard has brought his experience and focused on perfecting the shape and design of these two key ingredients to maximise the sailing experience. The 2.25m draft was chosen as a compromise between performance and ease of use.

First 36 Beneteau: Cruising or Racing? Both!

The new First 36, which will be premiered at the Dusseldorf Show in January 2022, will be configurable in two modes, which can be easily changed. Racing and Cruising.

In the racing layout, the large, modern cockpit allows for different helm and trim positions, both for sailing with a small crew and for sailing with a full crew. In this configuration, the table and benches are removed, opening up the cockpit. 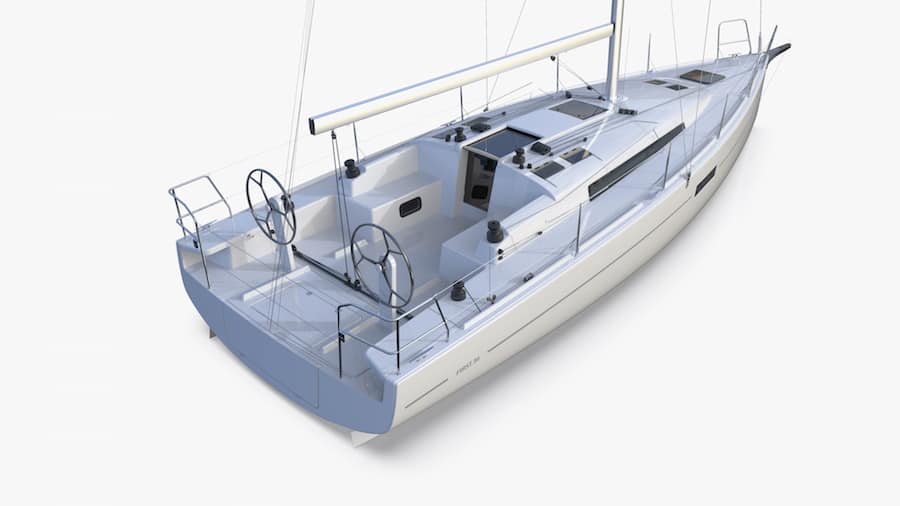 A higher than average helm position leaves enough room for the helmsman to move forward to the mainsail winch when sailing with a smaller crew. Positioning the winches in the cockpit allows one or two crew members to sail with their legs in and work the mainsail winches or primaries in full-crew mode. It allows the sheets to be crossed on the leeward side. Deck equipment is a mix of Harken, Ronstan, Spinlock and Antal products. 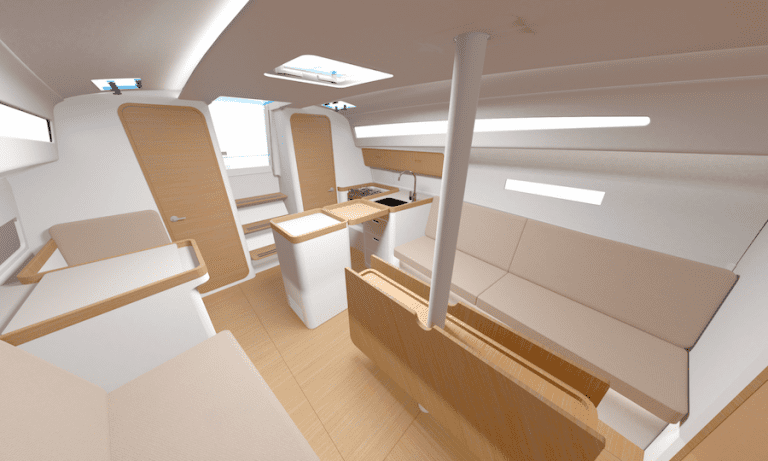 g, you switch to cruising mode. The cockpit benches with cushions increase the seating area and add space for storage and organisation. The cockpit table is large enough to accommodate a crew of six. In addition, the design team developed an ultra-lightweight platform to provide the First 36 with convenient access to the water without affecting the boat’s performance.

A great deal of work has been done below deck to maximize volumes. Just think, the First 36 has the same living space as the legendary First 40.7! There are three double cabins (the owner’s in the bow) and a bathroom, and a large fridge in the centre of the saloon (with the upper surface becoming a removable “chopping board”) that makes the galley truly XXL. A ‘corridor’ created together with the folding, removable table helps those on board to move around the saloon safely.

While the chart table is “disappearing” from cruising boats, the First 36 goes against the trend with a full-size table: important when sailing, it is also excellent as a “home office” designed for those who spend long periods on board. 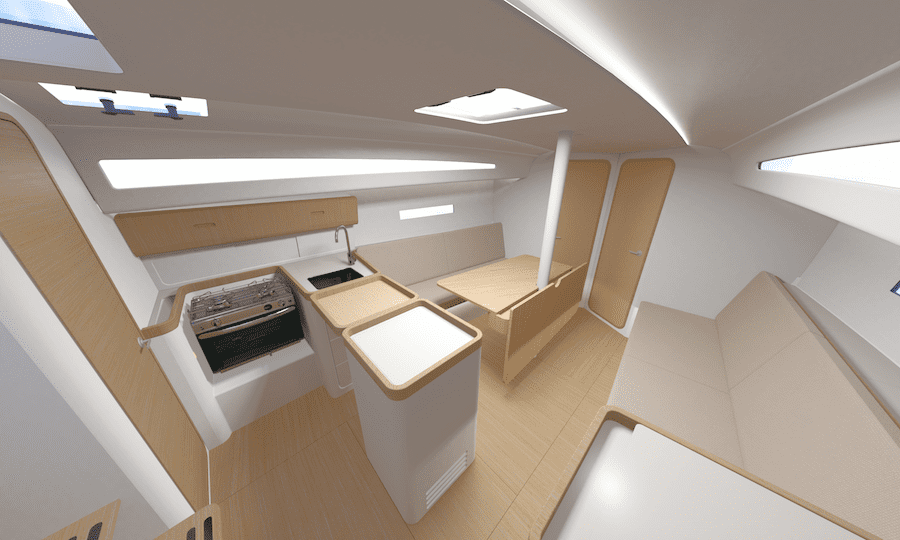 Two portholes in each area of the boat allow for airflow and natural light.