Shadow on board without problems with the boat umbrella Girasole Easy

First 36 is the new 11-meter racer/cruiser by Beneteau 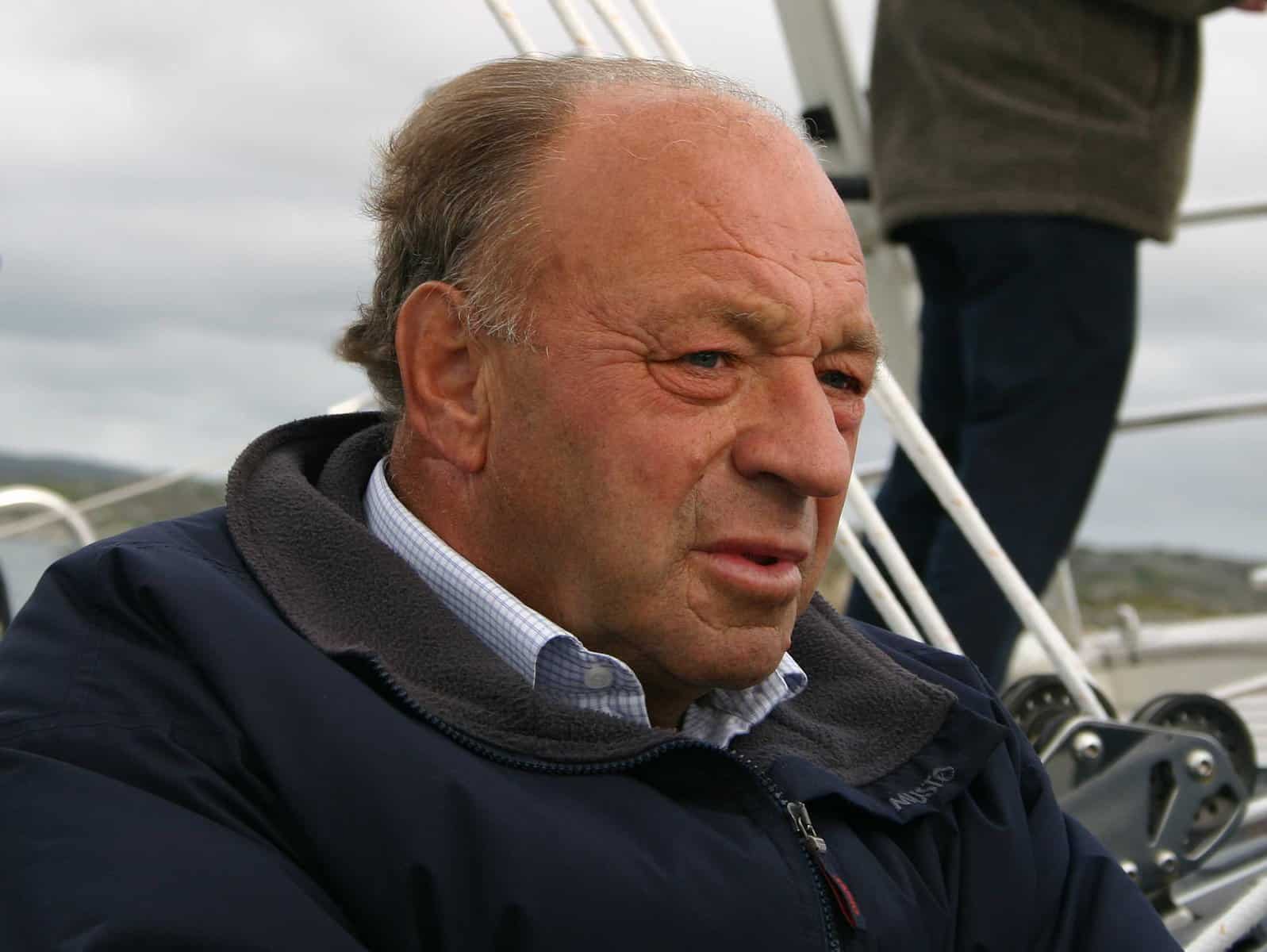 A boating legend, Christoph Rassy, has passed away at the age of 87. Mr. Rassy created a world icon brand of cruising sailing. A brand that immediately reminds us of sturdiness, safety, craftsmanship, attention to details, wood worked by shipwrights of the highest level. A brand of boats that don’t need words to describe them: just “it’s a Hallberg-Rassy”.

“He was an extremely good person,” says Fabrizio Dall’Olio of Dalmar Yachts, who has been selling Hallberg-Rassy in Italy for more than 40 years and got to know Christof Rassy well. “Affable, sometimes on his own, very determined. He actually invented modern bluewater.

Born in Germany in 1934, he migrated to Sweden in the 1960s with the dream of building the best possible sailing boats.

The Hallberg-Rassy story is worth retracing because, like all successful human affairs, it is full of episodes, ‘crossroads’ and choices.

Harry Hallberg had been building boats since he was 14 years old.

The company’s history began with Harry Hallberg in 1943. What is now called Hallberg-Rassy Varvs AB was originally two shipyards. Harry Hallberg, who lived between 1914 and 1997, started his career as a boat builder at the age of 14, building wooden boats. In 1943 he opened his own boatyard in Kungsviken on the island of Orust in Sweden.

In the beginning, he built his wooden boats more or less “in spurts”. Different possibilities were discussed with the customer and solutions came accordingly. The plans hardly existed at all. At that time it was said that “someone who cannot build a boat without drawings is not a true boat builder”.

Harry Hallberg’s most “successful” contribution was that he realized early on the advantages of fibreglass and building boats in series. In 1963 he was one of the pioneers in the mass production of GRP sailboats and was the first successful builder of GRP hulls with wooden superstructures as standard. His P-28 (a 28-foot boat) was a great success, even outside Sweden. Most of the first 100 examples were sold in the USA. 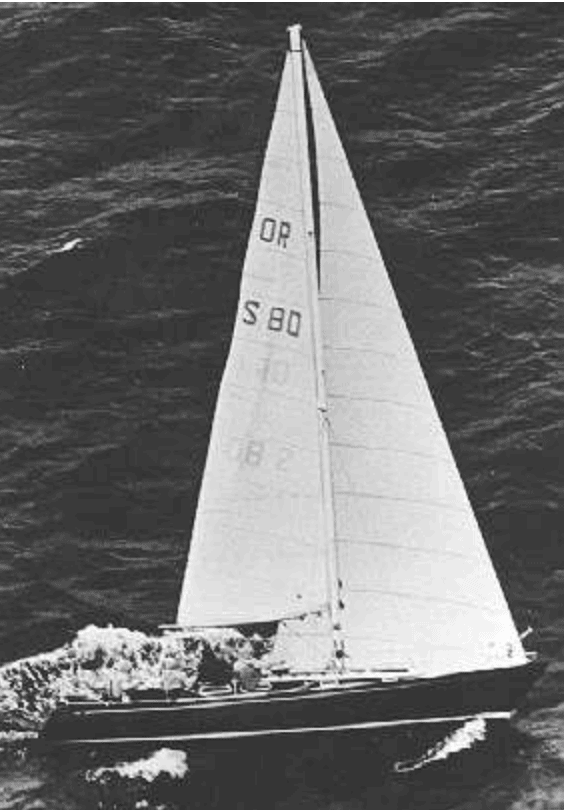 A wooden boat built by Christoph Rassy in the early 1960s

Christoph Rassy was born in 1934 and grew up in Bavaria on Lake Starnberger. As a young man, he built model boats and also real boats in his spare time. He wanted to learn more about boats and became an apprentice in a small wooden boatyard in southern Germany.

He dreamed of building bigger and better boats and wanted to live close to the sea. He thought Sweden, a big country with a lot of water, was the right destination. Consequently, he wrote to many Swedish shipyards asking for work. One yard wrote that they would take him on, and in 1960 Christoph moved, penniless and with a bicycle as his only possession, to Nötesund, Sweden, to build boats.

To earn more money, young Mr Rassy built boats for himself in his spare time. He used these boats for regattas, won and sold them at a profit.

Soon Rassy wanted to set up his own business. As luck would have it, this coincided with the change of location of a major boat builder. This boat builder was Harry Hallberg. In the middle of the 1960s the shipyard in Kungsviken had become too small for Hallberg, who built a new location in Ellös, 10 kilometres southwest on the island of Orust. When Christoph Rassy started his business, he bought the old Hallberg yard in Kungsviken.

n the years 1965 to 1972, Harry Hallberg and Christoph Rassy were competitors. In the beginning, Christoph Rassy built one-off boats. The first boat that became part of a series was the ‘Rasmus 35’, designed in 1966 by the then leading Swedish designer of elegant yachts, Olle Enderlein.

The first two were built entirely in mahogany and took a year each to build. This boat was in many ways ahead of its time. It was an ante-litteram ‘bluewater’ with a powerful engine and a central cockpit protected by a sprayhood. This is a solution that has remained with Hallberg-Rassy yachts to this day, indeed it is their defining feature.

When the Rasmus was presented, it immediately aroused scepticism. Some thought the boat was too big. In those days 35 feet was considered an enormous size for a boat. And with a sprayhood, too! This was an unprecedented combination that is now taken for granted on a good cruising boat.

At the same time Harry Hallberg was building his boats in Ellös. Smart and attractive boats at a reasonable price, thanks to mass production and fibreglass hulls.

Harry Hallberg retired in 1972. Once again, fate intervened; Christoph Rassy was looking for bigger premises. Ellös now produced the “Mistral 33” with a mahogany superstructure, the 1/2-ton “Mistress 32”, the best-selling “P-28” and the small yellow 24-foot “Misil II”, all designed by Olle Enderlein, except the P-28 which was designed by Harry Hallberg.

In 1972 the Rassy yard in Kungsviken bought Harry Hallberg’s yard in Ellös. As the Hallberg brand was by far the best known with its four designs and the Rassy yard only had the Rasmus, the new company was called Hallberg-Rassy. Harry Hallberg and Christoph Rassy, however, were never partners. 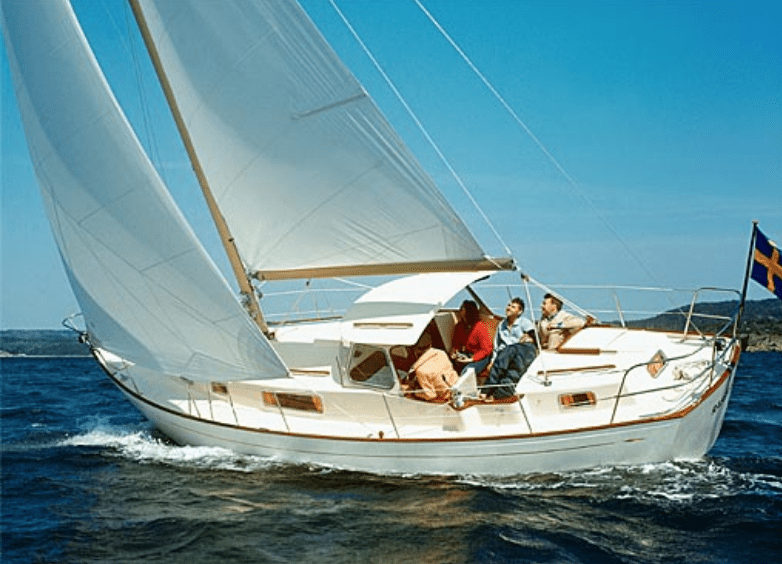 An anecdote: in 1972, a potential owner was undecided between buying a Mistral 33 from the Hallberg yard or a Rasmus 35 from the Rassy yard. The Rasmus had a central cockpit and the Mistral had an aft cockpit. The interested owner asked a Hallberg agent why he should choose the Mistral: “Because the boat has an aft cockpit, there is no risk of water splashing into the aft cabin,” was the reply. The potential buyer then went to the Rassy yard to see the Rasmus.

Here, more or less, is the discussion between him and Christoph Rassy:

Customer: Why not a boat with an aft cockpit, so that there is no splashing water in the aft cabin?
Rassy: Who recommends that?
Customer: The people of Hallberg in Ellös.
Rassy: They’ll never say that again.
Customer: Why not?
Rassy: I bought the Hallberg yard this morning.

In the end the owner chose a Rasmus and he still happily owns it. 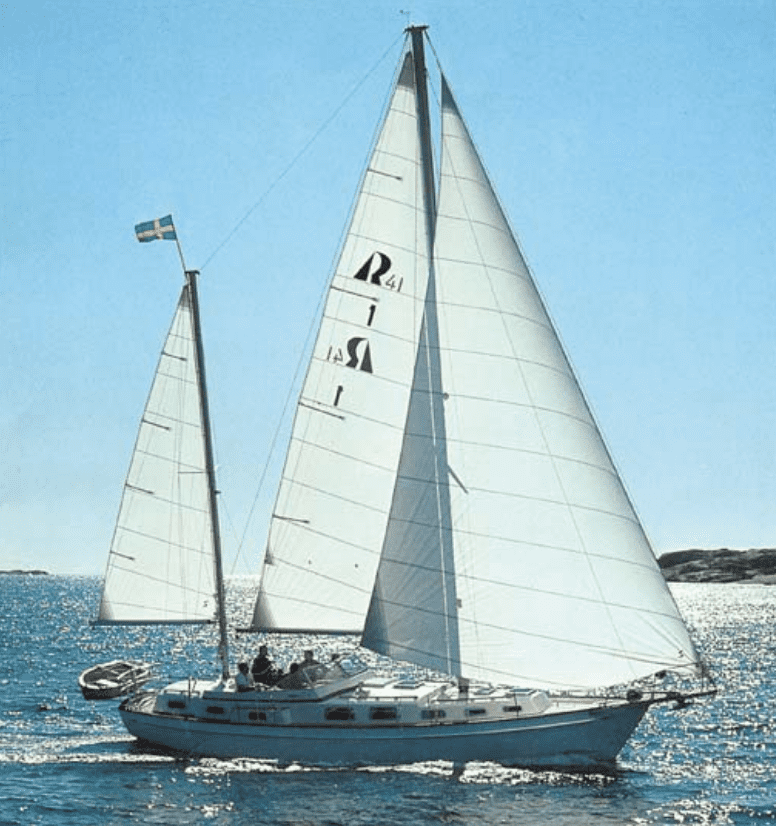 Birth of a legend that still endures today

Then came the Hallberg-Rassy 41, full of innovations for the time, the central cockpit boat par excellence: more than 100 boats were built between 1975 and 1979. 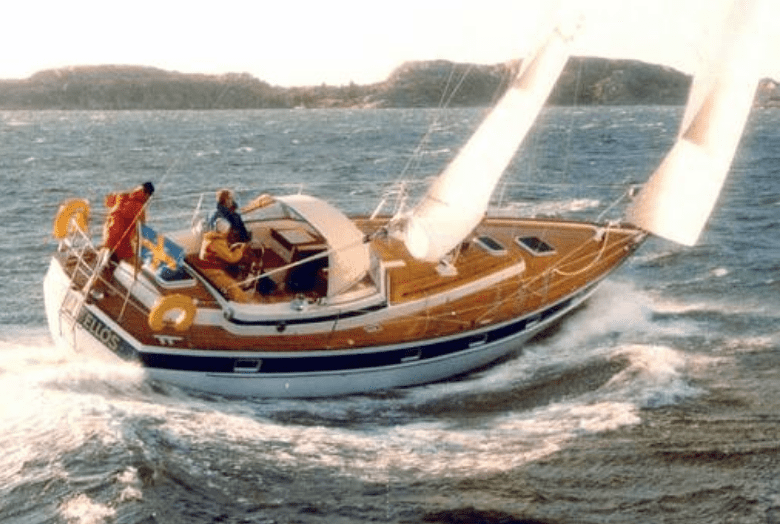 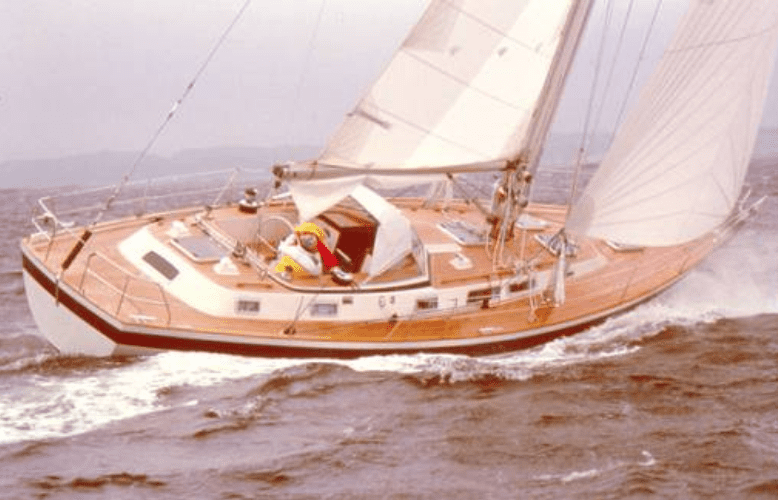