Vitalia II, the mythical catamaran born to sail around the world

Fifty days and three years. Very different times for the same boat trip. This is the story of a passionate owner of multihulls and a catamaran that made history in ocean sailing. The owner is François Bich, son of the Marcel Bich who managed to open the America’s Cup to multiple challengers. It was 1970 and on the 12 m SI France, Marcel Bich’s first challenger (he was beaten by the Australian Gretel II) François was also there. And the same at the 1974 edition. 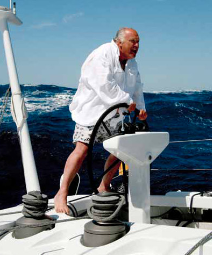 But in the resume of Groupe Bic’s current CEO, there is also a lot of ocean. It begins, in 1970, with Eric Tabarly on the Pen Duick III. Then, there is Shenandoah, the 1902 54-foot gaff schooner that ran in the family from 1972 to 1986. But François has a passion for multihulls. He also buys the trimaran with which Steve Ravussin won the 1998 Route du Rhum. And he sails a lot on Magic Cat, a 24-meter, Gilles Ollier-designed boat, where he meets Yann Penfornis, director of Multiplast, the yard that built the boat. Then the decision was made to implement the project in the drawer: a round-the-world trip, but with a very fast boat. He goes to visit Multiplast, in Vannes, Brittany. He discusses possible projects with Penfornis. Leaving the offices, however, François’ eyes return to a catamaran standing in the yard of the construction site. It is large, dusty, but loaded with history and records.

A CATAMARAN THAT MADE HISTORY
One over all: those 50 days, 16 hours, 20′ 04″ that in 2005 (and then for seven years) made it the fastest boat around the world. That boat was Orange II, another Ollier catamaran, launched in 2003 and brought to the record by Bruno Peyron. The night brings advice. The next day François made up his mind: his world tour will be with Orange II. The new name is ready: Vitalia II, the sum of his children’s initials. The gamble begins: turning a record-breaking super-cat 36.80 meters long and 16.90 meters wide into a cruising super-cat.

THE BIRTH OF VITALIA II

Jack Michal, Franck Martin and Yann Penfornis, the three architects who had given birth to Orange II are together again with a huge responsibility.”The work” tells Penfornis, “was to integrate as elegantly as possible a central, fully equipped nacelle that would include a large salon with kitchen-bar, owner’s quarters and with open-air living“.
In the hulls, two VIP cabins in the port one, crew quarters and service rooms in the starboard one. All without increasing the weight too much and thus changing the cat’s righting torque with possible disastrous consequences on structure and equipment. That is why load cells have been applied to the entire rigging of the forty-eight-meter mast, which also carries 1,000 square meters of sails. The crew thus knows live the stresses acting on the boat and can sail safely, even at high speeds. Those that François Bich is preparing to experience after the old Orange II, now Vitalia II, returned to the water last April seventeen.
To transform the catamaran that once belonged to Bruno Peyron into Vitalia II the workers of Multiplast, with Daniel Domergue of Narrative for exterior design and Stéphane Lauro of Domicile Fixe for interior design, needed thirty thousand hours of work to which must be added the ninety thousand hours of the construction of Orange II. But the DNA of a unique cat has remained intact.

ON THE HORIZON IS A WORLD TOUR
And Vitalia II is ready to go around the world again and thus fulfill François Bich’s project. Depart next November from France for the Canary Islands; then Panama, Tahiti, Cape Horn, Bermuda, Cape Town, New Zealand, Panama again, and finally back to the Mediterranean in May 2018. It may have been three years, but three years flying from port to port as only a record-breaking super-catamaran, now turned grand cruiser, is capable of doing. Good wind Vitalia II!